Gaining Ground, Growing Food for All 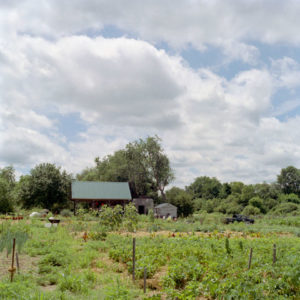 The people behind Gaining Ground, a non-profit farm in Concord, Massachusetts, don’t just believe that the hungry shouldn’t have to subsist on canned and boxed food donations. They make sure they don’t, by converting this principle into 30,000 pounds of organic produce grown between April-October. Then, they donate it all to hunger relief organizations in their region.

Their philosophy exemplifies the current trend of democratizing organic foods. But this farm has been around since 1994, which says a lot about the integrity and longevity of its intention. “Simplicity makes us nimble,” said farmer Verena Wieloch. “We aren’t beholden to supporting our own huge infrastructure to make the farm successful. If a crop fails, it’s not the end of the farm. We’re not counting on every dollar for every pound of potatoes to make our living.”

They lease their land from the town and receive funding from individuals, family foundations, and the local community chest. Their annual student read-a-thon, Read For Seeds, encourages 3rd graders from the local public schools to get involved with community service. The kids generally raise 15% of the farm’s yearly budget. But Gaining Ground keeps a tight budget of $150,000 which means that volunteerism is tremendously important, and team leaders work to inspire their volunteers to feel as enthusiastic about community responsibility as they feel themselves.

“I’m not a farmer. I’m a farmer enabler,” says board member Stona Fitch. The same holds true for the rest of the board, which is comprised of financial people, writers, locals and parents. On Saturdays, they also head up Concord Food for Families, which gives a direct deposit of freshly picked crops to 30+ families in the area. Last Saturday in the rain, they filled a truck with squash, greens and onions, set up a table behind the Armory, and gave their produce away. They also talked to their customers about how to cook the vegetables, teaching them not only about nutrition and recipes but also about the pleasures of cooking.

In its most simple form, Gaining Ground is a service provider and it knows its customers well: Cambodians, Laotians and Vietnamese, among others. Volunteers plant what people want to eat — everything from seasonal varieties (right now: eggplants, peppers, carrots, lettuce, beets, turnips, and rutabagas) to traditional vegetables typical of Asian cuisines (lemon grass, bitter melon, obscure herbs, bok choy, hot peppers, okra). The farm outputs about 300 varieties of crops per season and its organizers interface with organizations they select for donation, making sure that the produce is getting to those who need it. The supported groups tend to be small and within a 20-mile radius from the farm. Proximity allows for crop pick-up within 24-hours after the vegetables have been picked.

On five acres of cleared land, the farm runs on manpower from 9am-4pm. People usually work three-hour shifts doing age-and skill-appropriate tasks. They even have raised beds for handicapped helpers. Three days a week, volunteers pick, wash, weigh and box crops for pick-up in the mornings. Then, the afternoon is spent weeding, transplanting — and in blightless seasons — staking tomatoes. They don’t have tractors or machinery—only hand tools.

“We can afford to take risks and play with techniques that maybe a for-profit farm wouldn’t want to,” Wieloch explains. They experiment with a no-till method that increases soil fertility. Nitrogen-fixing crops are rotated through the beds where they also have a drip irrigation system. In addition, they have used organic pesticides only once in the last ten years.

For farmer Wieloch, being in the garden means working with few expectations and little limitations. And she’s also keen on democratizing healthy eating.

For the volunteers, farming means positive community work that 99% say they would do again the next growing season, and they do. Hard work on the farm ends with a chance to catapult rotten tomatoes using a handcrafted “weapon of mass nutrition”— simply put, a flying compost mechanism.

It’s a unique farm but Fitch has seen an up-tick in interest from others looking to do the same type of work. He’s even written a business model for others to follow and you can read it here.

Started on a private plot of land, Gaining Ground now sits on Thoreau’s birthplace property. Sixteen growing seasons later, the farm reinforces the beauty of simplicity. The goal is to grow more crops and take in more volunteers “while still keeping the experience as rich and meaningful as it always has been. In short, to grow gracefully.”