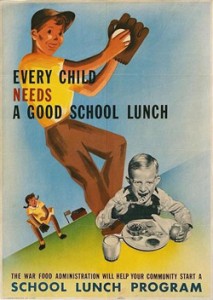 “The school lunch program was created in 1946 as a measure of national security,” says Jenkins. “The goal was to make sure that our nation’s children were healthy, because only then would the whole nation be productive.”

Four decades later, most of us take for granted the fact that schools serve lunch, and that the federal government subsidizes many of them. Whether they have anything to do with students’ health is another story. “A lot of today’s adults remember school lunch when it was institutional Salisbury steak and mashed potatoes,” says Jenkins. “It wasn’t delicious, but no one expected it to be. Now, the cheapest fast food and junk food is in our cafeterias and it’s fueling the obesity epidemic.”

Jenkins and his colleagues at Slow Food USA have spent the summer organizing Time for Lunch, Slow Food’s first nationwide grassroots advocacy campaign focused on getting real meals in front of the 30 million children who eat in today’s cafeterias. At the core of the effort is the Child Nutrition Act, a bundle of legislation including the National School Lunch Program that is up for reauthorization by Congress at the end of this year.

To draw attention to the issue, Slow Food chapters in 49 states have planned a national Day of Action by staging 295 Eat-Ins — or potluck gatherings in parks, civic centers and backyards — as a way to engage communities, build bridges, and show Congress that school lunch is a priority.

The biggest myth about school lunch, says Deborah Lehmann of the school food policy blog School Lunch Talk, is that kids are eating square meals in the middle of the day. Lehmann has spent the last 8 months visiting school cafeterias around the U.S. and interviewing the people who work there. In addition to kids who bring lunch from home and those who opt for the official lunch option, many of the students she observes piece together a mid-day meal entirely of snacks and so called “a la carte” foods. In one school she visited recently in the Santa Cruz area, Lehmann sat down with an administrator to look through records of what the students were eating and the results were astounding. “There were a number of kids eating a lunch of corn nuts, hot chocolate, Gatorade, and baked Cheetos.”

Because school cafeterias essentially function as stand-alone businesses that get no funding from school districts, they rely solely on the reimbursements they receive for free and reduced meals and the income they generate when students buy what they serve. It’s not hard to see why many have resorted to serving what students will buy. And the drive to create novel, kid-friendly products like bubble gum flavored apples and rootbeer flavored milk means kids don’t have much reason to make healthy choices.

“School lunches have always been a reflection of what people are eating in America,” says Lehmann. “Back when we served casseroles and spaghetti with meat sauce, that’s what kids were eating at home. Today they’re used to eating fast food and frozen food and processed food and restaurant food. So that’s what gets served.”

Of course, it’s the same forces that have shaped children’s diets outside schools that shape what they eat between classes. The problem dates back to the 1980s, when Congress opened the doors to private food service companies.

When schools are given commodities from the USDA, most send them straight to companies to be processed. Over the years it has become much more cost-effective for schools to send their chicken, for example, to Tyson and to get it back in the form of chicken nuggets, than to prepare it in their own, often under-funded, low-function facilities.

Many of these companies, says Jenkins, have been perfectly happy to sell highly processed foods back to schools “at a below-market price because it meant that they were going to get their brands and products into the lunch room and potentially get customers for life.”

The solution? For starters, Slow Food is asking for one dollar more per student –- an increase that may seem large in light of the current $2.68 the government currently pays for school lunch reimbursements. But because students who pay for lunch would continue doing so, the total increase for reimbursements for free and reduced meals would only be around 18 million dollars, says Jenkins. It’s a modest request that would “give nutrition directors and food service directors the baseline level of support they need to start bringing healthier options into the lunch room.” More funding, combined with education about growing and cooking food, could as Slow Food President Josh Veirtel wrote in a recent letter to the New York Times, represent a “turning point in the food movement” and “signal the rise of a national movement driven by the passion of ordinary citizens.”

Want to show your support for healthy school lunches? Attend an Eat-In this Labor Day: Find one in your neighborhood.

Can’t make it to an Eat-In? Visit the Slow Food USA site to sign the petition.