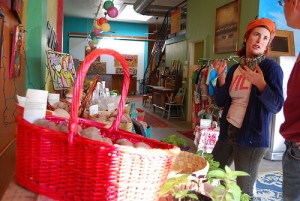 Urban farming is not new — its been a way to feed cities for thousands of years. But in the US, it was purposely planned out of our cities, even as they grew bigger and, as a result, hungrier. Now many of our cities contain massive sprawl, which have created new opportunities in the form of abandoned lots, a consequence of the economic downturn. But we also have a mobilized movement of individuals interested in feeding people, especially those without access to healthy fruits and vegetables (many of whom reside in cities). But connecting these dots is sometimes more complicated than it seems.

As urban farming takes hold across the nation, reviving old school ways of supporting communities with homegrown food, it will inevitably bump into resistance in the form of outdated laws and legislative confusion around this up and coming issue, in addition to complaints by neighbors who don’t see the value in having a farm nearby when there are still packed shelves at the supermarket. These neighbors worry about their views, are disturbed by farm animal noises and deposits, and fear property value declines, which have more to do with economics than kale.

These anticipated problems now have a face — Bad Seed Farm is at the center of a neighborhood zoning debate in Kansas City, Missouri. The farm is run by two forward thinking young agriculturalists, Brooke Salvaggio and her husband Dan Heryer, both age 27, who pulled up a half acre of her grandfather’s lawn (with his blessing) to plant their urban farm. The two provide local organic produce to city residents via their store front farmer’s market (Salvaggio pictured at the market, above) and run a popular CSA. But the farm is located in a more affluent section of the city, where it could be viewed as “rubbing up against the suburban ideal” of perfectly manicured lawns, said Katherine Kelly, Executive Director of the Kansas City Center for Urban Agriculture. “As more people get into urban agriculture, it becomes more visible to the neighbors,” said Kelly. “As [urban farming] becomes a business… people start having opinions about it.”

Bad Seed is one of around fifty urban farms in greater Kansas City, where almost 22% of inhabitants were living below the poverty line in 2007, and unemployment jumped around 5 points (to 13.1% in Kansas City, KS, and 10.4% in Kansas City, MO) in the last year. This particular case has brought to the fore an issue which is bound to come up again and again as growing food changes the cityscape: how do we value urban land, and what are the existing laws on the books that keep urban agriculture from flourishing and feeding locals? 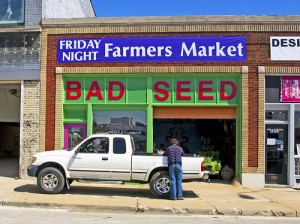 Kelly took part in a meeting with some of the legislators and the Bad Seed farmers this morning. Prior to the meeting, the urban farmers had been warned that they could be in violation of a zoning law that states that no business can be conducted in a residential zone. Technically, Salvaggio and Heryer should be exempt as they only sell produce through their store front farm stand nearby (pictured at right). But the law is not nuanced enough and so is open for interpretation in the case of growing produce. The house on the property serves as the primary use of the land, a residence. Today, the legislators clarified that as long as Salvaggio and Heryer are the only two farming on their land, their urban farm will be considered an accessory use, instead of a competing primary use. Though restrictive (no volunteers, specific delivery hours to follow, etc) this is great news.

The Kansas City Center for Urban Agriculture is working on re-writing the code with city council members to more clearly accommodate urban farming, in an era when more and more unemployed people, hunger advocates and beginning farmers are looking for just these kinds of opportunities to grow in urban settings.

“I think this is a sign of the maturing of the urban agriculture movement,” Kelly said. “Urban farming is part of a a new emerging definition of the city… We are eager to work with planning and development officials to develop new codes addressing urban agriculture.”