A Julia Child for the 21st Century: Meet Lorna Sass 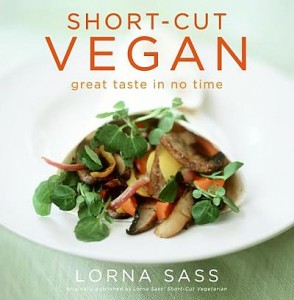 Nora Ephron’s effervescent Julie & Julia has evidently sparked a mad dash to snap up Child’s epic Mastering the Art of French Cooking. Butter’s back, and margarine’s been marginalized. Three cheers for real food! After all, as Joan Gussow says, “I trust cows more than chemists.”

Any film (or book) that gets Americans psyched about cooking real food can only be a good thing, of course. But when Julie Powell hatched the Julie & Julia Project, latching on to Child’s old-school continental cuisine to lift her out of a dreary day job, she hitched her blogger bandwagon to a diet dominated by meat, eggs, and dairy.

Back in the day, that was OK: in Child’s era, phrases like “manure lagoon,” “gestation crate,” “battery cage,” or “bovine growth hormone” would have sounded even more foreign than “boeuf bourguignon” or “sauce béarnaise.”

But a half century or so later, I’m less excited about dishes that require preheating the oven to 350 degrees than I am about recipes for reducing our greenhouse gas emissions to 350 parts per million (ppm). That’s the level of CO2 in the earth’s atmosphere that scientist James Hansen and Rajendra Pachauri, chairman of the Intergovernmental Panel on Climate Change, agree that we need to achieve to avert catastrophic climate change. We’re at nearly 390 ppm now.

We won’t get back to 350 on a diet of denial and duckfat; a better blueprint for eating green would be meals centered around foods grown through photosynthesis, not fossil fuels–i.e., fruits, vegetables, nuts, whole grains. But before you can say “Bittman, ” I’d like to nominate someone less well-known, but uniquely–and supremely–qualified to be this century’s Julia Child.

Meet Lorna Sass, one of America’s foremost experts on pressure cookers and whole grains. Think of her as the Ed Begley Jr. of the cookbook world–a pioneer in the art of low-carbon cooking. She’s been showing us how to eat low on the food chain for decades with a series of cookbooks that provide all the techniques you need to prepare fast, simple, and satisfying plant-based meals.

Her 1992 cookbook, Recipes from an Ecological Kitchen (dedicated to Mother Earth, naturally) was so ahead of its time that her publisher decided to downplay Sass’ emphasis on environmentally concious eating when the book came out in paperback, rechristening it Lorna Sass’ Complete Vegetarian Kitchen.

And now the truth can be told about 1997’s The Short-Cut Vegetarian: it was essentially a vegan cookbook. But back then, nobody knew what vegan meant. So William Morrow has published a new edition with the more accurate title Short-Cut Vegan. In addition to the usual fast, easy and flavorful recipes revolving around beans, veggies and whole grains, it contains tidbits like this:

I’m convinced that quinoa will become the rice of the nineties, as more and more people discover this light, quick-cooking, nutritious grain.

OK, so she was off by a decade or so; her prediction is finally coming true, and the timing couldn’t be better for the new edition. Short-Cut Vegan is a lovely little paperback crammed full of easy-to-make, tasty-to-eat recipes, along with plenty of tips on ways to create wholesome dishes in just a few minutes.

Mastering the Art of French Cooking became Julie Powell’s bible. I refer to a half dozen of Sass’ books religiously, including her James Beard Award-winning Whole Grains Every Day, Every Way, and Pressure Perfect: Two Hour Taste in Twenty Minutes Using Your Pressure Cooker. Like Sass, a former vegan turned conscientious carnivore, these books are not vegetarian. But, like Sass, I try to minimize my meat-eating, so the book I refer to almost daily is her Great Vegetarian Cooking Under Pressure.

The subtitle of Great Vegetarian Cooking Under Pressure is “Two Hour Taste in Ten Minutes,” and therein lies the secret to Sass’ ecologically savvy cooking. With a pressure cooker, you can whip up all kinds of beans, grains, soups, stews, curries, chilies, risottos, whatever, in a flash. In the time it takes to get take-out, or have a pizza delivered, you could throw together a tasty, wholesome meal using fresh ingredients instead.

Sadly, the pressure cooker suffers from a terrible PR problem. Most Americans seem to think it’s some kind of culinary IED (improvised explosive device). Mention the words “pressure cooker” to just about anyone and you’re liable to get an apocryphal anecdote about the time Grandma’s old-school jiggle-top pressure cooker exploded and left spaghetti sauce on the ceiling.

But there’s a whole new generation of pressure cookers that are totally safe and easy to use. And with the publication in November of the 20th anniversary edition of Sass’ long-out-of-print Cooking Under Pressure, you’ll have the definitive guide to help you master the art of low-carbon cooking.

What Julia Child did for meat, eggs and dairy, Lorna Sass does for fruits, whole grains and vegetables. Now, if only PBS–or the Food Network, or whoever–would give this warm, witty, down to earth woman the opportunity to share her wisdom with a wider audience. In our climate-challenged era, it’s time to bid farewell to the French Chef and bring on the Fresh Chef. And it’s gonna be sunny Sass, not Rachel Ray.

Originally published on the Green Fork