The Story of the White House Garden (VIDEO) | Civil Eats

The Story of the White House Garden (VIDEO) 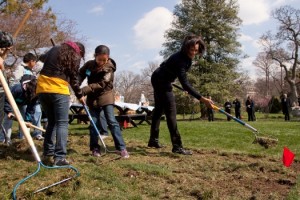 Yesterday the White House released a video featuring First Lady Michelle Obama and assistant chef and food initiative coordinator Sam Kass telling the story of the White House garden. The video is around seven minutes long, and features footage of the building of the garden, with Kass giving details about the history of gardening at the White House (there is even some historical footage from “Victory Gardens” a 1944 government film to encourage people to grow at home, which you watch in full here), soil amendments, the seeds from Thomas Jefferson’s Montecello garden, and even a time lapse video as the garden was growing.

This short film also features the Bancroft Elementary students who helped to plant it. “We wanted the focus to be on kids,” the First Lady said, “because you can affect children’s behavior so much more easily than you can adults.” She also said that the garden was largely about setting an example for other families through changing her own family’s diet, specifically through “eliminating processed and sugary foods,” and encouraging eating together around the table. She continued, “the garden is really an important introduction to what I hope will be a new way that our country thinks about food”

The White House Kitchen Garden has been a critical part of the paradigm shift in the national conversation on health and nutrition that’s been steadily coming out of the East Wing since January. Mrs. Obama is the only First Lady in the history of America to actually have a food policy team, it should be noted, led by Kass, and including advisers Jocelyn Frye and Melody Barnes. Bestselling author Michael Pollan has referred to the Kitchen Garden as “the most important event in sustainable agriculture this year,” and he’s right. But it’s important for all other kinds of Obama policy initiatives too, including health care reform.

Check out the full video below: