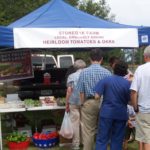 When I first moved to Auburn, Alabama from Los Angeles almost a year ago, I immediately set out to find healthy, humane, local, and sustainably grown food sources. My quest was not easy. In a state where the obesity and heart disease rates are the second highest in the nation, I wasn’t sure what kind of healthy food might available, much less easily accessible. As it turns out, there is a growing local and sustainable food movement that, if nurtured, may turn into a revitalizing force for the environment, rural communities, and citizen health in Alabama.

The city of Auburn is home to Auburn University, a land grant institute with respected Agriculture and Veterinarian Medicine schools. Yet, like most agriculture schools across the nation, there is precious little effort dedicated to teaching sustainable, organic, or small-scale farming techniques. There are some small but bright lights, however, on the campus. The College of Agriculture, in partnership with the Alabama Agricultural Experiment Station and the Alabama Cooperative Extension System, runs Auburn’s only farmers market. Unfortunately, when I first arrived in Alabama, it was the middle of September and towards the end of Alabama’s main growing season. I had missed the farmers market that runs from June through August, so my initial search led me to Auburn’s only health food store. While I was pleased that Auburn has such a store, it is small with fairly limited offerings, and many locals don’t shop there. Neighbors and colleagues said they usually just shop at the local Kroger, Winn-Dixie, or Sam’s Club.

Since then, I have happily found many different sources for local and sustainable foods and a growing movement of citizens, farmers, and some state officials for access to and support of fresh, local foods. I have become part of a wonderful Community Supported Agriculture (CSA) cooperative at Randle Farms that offers a variety of fruits, vegetables, free-range eggs, and sustainably raised meats throughout the year. Frank and Pat Randle have grown their Auburn area farm from five acres in 1978 to over 200 sustainably farmed acres today. The Randles have recently partnered with Steven Ledbetter of nearby Lafayette, Alabama to offer fresh, pasteurized chicken and Thanksgiving turkeys that Ledbetter raises on his 10-acre farm. This past Saturday night I attended a screening of the new film Fresh at the Ledbetter farm and was pleased to meet a variety of like-minded people from all over the area, including nearby Georgia. The Ledbetters, a warm and friendly young couple who grew up in the area, cooked chicken for the occasion with the guests bringing fresh and local side dishes. After dinner, the Ledbetters gave a tour of the farm and Steven explained his humane and sustainable practice of raising chickens, turkeys, and goats. The love and respect he held for his animals and concern for their well-being as well as the healthy use of his land was evident.

Unfortunately, too few small local farmers are organized enough to offer a CSA cooperative or sell produce year-round. Sidney Walters of Lafayette sells his vegetables at Auburn’s Ag Park Farmer’s Market and I asked if he offered a CSA. He said, “I’ve thought about it. But I’m just not organized enough. You really have to have your ducks in a row for one of those.” Walters has a small country store called The Garden Market on his farm, but other than that and the summer farmers markets, he has no venue to sell his products. “I can’t sell to the local grocery stores. They want the produce at too cheap a price. I gotta at least break even.” To get by during the winter, Walters sells animal feed to the surrounding rural areas.

Yolande Wersinger who owns and runs Auburn’s health-food store, Dayspring Natural Foods, blames the lack of Alabama produce on the inability or unwillingness of local farmers to organize. She gets most of her produce from Destiny Organics a wholesale company out of Atlanta that distributes organic foods produced from Georgia, Alabama, Florida, Tennessee, North and South Carolina. Dayspring, in operation since the early 1970s, was bought and expanded by Wersinger in 1979. Born and raised in the south of France, Wersinger was used to having local and fresh produce easily available. When her husband joined the faculty at Auburn University she decided she could live here only if she bought the health food store and worked to help build a stronger healthy food movement. While that goal has not always been easy, more and more people are choosing to buy local and organic than ever before.

In June 2009, a local nursery, Blooming Colors, opened up a market that offers fresh, local and sustainably grown fruits and vegetables, fresh and local shrimp, and specialty items such as boiled peanuts. The Market at Blooming Colors is a welcomed new addition for fresh and local produce year-round. John Braswell, who manages sales at The Market, told me that while not everything the market offers is local, most of the produce comes from his brother’s Auburn farm, although they do buy from other farmers in the area. The Market soon plans to open an attached café that will feature much of the fruits and vegetables available at the market including home-made ice cream and fresh crepes.

While conventional agribusiness practices in Alabama are still the norm, more and more farmers are turning to sustainable practices and more and more people are supporting them and their products. A state run agency, the Farmer’s Market Authority assists with marketing local agricultural products by providing information and leadership to farmers and local governments. The FMA wants to lessen the role of the “middle-man,” i.e., the grocery stores and distributors, in order to bring the farmers’ products directly to the people thereby cutting costs for the consumers, but still bringing a fair profit to the farmer. The popularity of farmers markets has grown in Alabama from only 17 in 1995 to more than 95 today. In addition, the Southern Sustainable Agriculture Working Group and the Alabama Sustainable Agriculture Network work to expand sustainable agriculture practices throughout the state.

In an era of rural areas devastated by factory closures, widespread meth labs, and environmental disasters, the local food movement’s social justice element can’t be ignored. The movement crosses political spectrums and transcends race, class, and religion as farmers, citizens and local and state officials work together to make sure food is fresh, healthy, and benefits our local communities.

Lori Woods is a teacher and freelance writer currently living in Auburn, Alabama. She is committed to animal rights, environmentalism, and social justice in her teaching and writings. Read more >