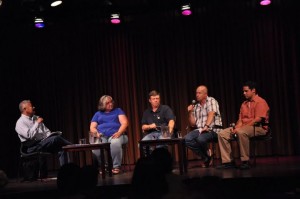 Inspired by his new book, Wisdom of the Last Farmer, David Mas Masumoto—renowned third-generation California farmer and award-winning author of Epitaph for a Peach—recently moderated a panel discussion at the 92YTribeca in New York City about multi-generational farming life and legacy. (Civil Eats wrote about Masumoto’s new book, and the young farmers who won a copy are here.) Sharing their insights on the connections between families and farming were long-time Greenmarket farmers Cheryl Rogowski of W. Rogowski Farm in Pine Island, New York; Fred Wilklow of Wilklow Orchards in Highland, New York; and Ron Binaghi, Sr. and Ron Binaghi, Jr. III of Stokes Farm in Old Tappan, New Jersey.

As I made my way in the searing heat to the lecture along Canal Street, dodging taxis, street vendors, and tourists stopped dead on the sidewalk, I considered how the Cityscape is so diametrically opposed to the places these farmers grow the food we eat. And yet, by giving farmers’ voices a prominent place and bringing them to the stage, and by introducing them to new audiences, we are creating a critical connection to eaters and, hopefully, better knowledge and appreciation of our food sources. There before us, in the darkened, air-conditioned room sat the real American idols: our farmers.

Cheryl Rogowski has been my personal hero ever since I read her profile in the New York Times in 2004 and learned that she was the first farmer to receive a MacArthur fellowship or “genius award” for reinvigorating the American family farm. After 20 years of working in the business world, Cheryl returned to her family farm to apply her savvy and love of the land to revitalize her family’s second generation farm. W. Rogowski Farm is located in the “black dirt” region of Orange County; at 26,000 acres, it’s the second largest area of contiguous fertile muck in the nation outside of the Florida Everglades.

Cheryl transitioned a typical onion farm into a diverse 150 acre operation, where she grows over 250 varieties of produce each year (including more than 50 varieties of chilies and 20 varieties of garlic). Her family farm supports one of the country’s first low-income CSAs, multiple farmers’ markets, and a farm stand. Cheryl’s advice to new farmers was to look back before looking forward and to persevere in the face of all of the challenges and obstacles that farming offers, noting that she had lost half of her tomato crops to the recent blight.

Fred’s family has been farming his land for six generations, since 1855. He and his wife have been going to Greenmarket in Brooklyn since 1984, and with the help of their four children, also started pick-your-own apples at their home farm. Fred also grows stone fruits and berries and recently started raising livestock on 100 acres. When asked by Mas what advice he would give to today’s young farmers, Fred hopes his son and daughter will figure out how to farm without having to work as hard, a comment that was echoed by the other farmers.

The Binaghi’s farm has been in the family since the 1800s and today is on 17 acres with 40,000 square feet of greenhouses. Located in pricey Bergen County, where, as Ron Sr. said, they’re growing subdivisions, their farm is now worth $10 million. Ron Sr. started selling produce out of his farm truck in the City in the late 70s and then at the Greenmarket (he even went to market on his wedding day). In 2000, he was named Outstanding Young Farmer of the Year in New Jersey. His son, who left music school to become a farmer like his dad, is now also a partner in his family’s farm and runs his own Greenmarket stand at Lincoln Center. It was obvious how much love and joy exists between this father-son farming team.

As stories of family farming were shared with the audience, Ron Sr. and Mas noted that both of their fathers had strokes in front of them, a heavy, but powerful reminder of their duty to take over the helm and carry forward the family tradition. All of the farmers expressed an extreme personal devotion to their legacy. As they gave advice to new farmers today—learn from the “old guys,” appreciate the work that’s already been done, understand and commit to the hard work—Mas added, “If you fall down seven times, you get back up eight.” A valuable lesson for us all.