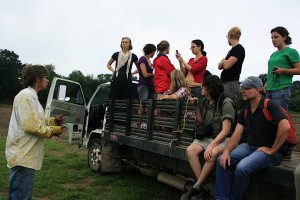 Amy Hepworth went long tomatoes this year. A farmer in Milton, New York, Hepworth brought new land into production and invested heavily in the crop hoping the effort would help pay for the farm and, in part, help stimulate the local economy. Then came late blight.

Hepworth and her partner Gerry Greco detailed their battle with the air-born fungus when the members of Hepworth’s community supported agriculture (CSA) from Sixth Street Community Center in New York City visited Hepworth Farms two weeks ago. The visit upstate was our first in the long relationship with the organic farm, and as Hepworth and Greco plunged into a discussion on tomato pathology, it seemed the farmers were as excited about the trip as we were.

Early this spring the farmers were already taking every possible precaution to guard against the five other diseases that normally plague the fruit. They bought all new stakes and seed trays and carefully sanitized the seeds in boiling water. Tomato diseases are often borne in the soil, so they chose land that had no disease history, some of which had not been cultivated for a 100 years.

The preparation left Hepworth and Greco feeling confident as they went out to secure growing contracts for the season. Their hope was to generate cash to pay for the farm and employ more workers.

“We are going into fields that don’t have any history of disease, this is our year we don’t have to spray,” Hepworth said of their position in the spring. “We go out and get a lot of contracts for growing, to pay for this. Because we have to employ more people now because the economy is sluggish. Farmers have to pick up, we’re going to kick in some idle land, we’re going to do our part, because we’re the producers, so that is our job. So we go out and get more contracts. Now comes the late blight.”

“Bummer,” someone in the crowd says.

Late blight is the same air-born fungus that led to the Irish Potato Famine in the 1840s. The disease thrives in the unseasonably cool wet weather we had earlier this summer. The blight turns the leaves and stems brown and a white mildew spreads across the surface. Tomatoes become a brown mush. Like most mildew, high temperatures and dry conditions kill the fungus, so it could never sustain the weeks of soaring temperatures that are typical of Northeastern summers.

Instead there is a pandemic. At the first sign of blight a plant must be pulled and destroyed, and the plants around the blight infestation must be torched. Farmers across the Northeast have lost their tomatoes and the thousands of dollars invested in them.

“So meanwhile, back at the ranch, we’re sitting on 10-15 acres of tomatoes and that means for us that after every rain we have to put copper out there,” Hepworth said. “It was really hard to handle and do, but there was not a lot of choice about it. Now you can say, ‘Well, plant another crop.’ Well at this point, there’s a quarter of a million dollars invested in this ordeal here. We have a lot of things going on here to sustain and support a farm to feed people. So we spray. We sprayed the copper this year. And we have tomatoes. There are many, many organic farmers who do not have tomatoes this year.”

Copper based fungicide is the treatment accepted in organic farming practices and it is one of the few tools to fight blight. According to the Cornell University Cooperative Extension, the state’s agricultural research institution, application of copper is advised only after following other organic practices including using land with no disease history, planting in wide rows and determining disease resistant cultivars. Copper application is strictly controlled because it does not break down in the soil and its accumulation is harmful to soil biology.

Disease resistant tomato strains are still being developed, and Hepworth said the tomatoes planted at Hepworth Farms this year show mixed signs of resistance. All of the tomatoes will be washed on the farm. During our tour of Hepworth Farms we visited the tomato washing station and sampled a few of the perfectly formed cherry tomatoes.

“We’re washing them all but there is still going to be residues of copper,” Greco said. “It is harmless to you but you should just wash them again.”

Although tomatoes are a cash crop whose success or failure determines the bottom line for many farms, a small number of other crops thrive in the recent weather. Leafy greens are typically grown in the early spring and late fall precisely because it is typically cool and wet. This summer, farmers diversified enough to have summer greens are experiencing bumper crops with little maintenance.

“The insects have gone off to hide in the bush,” Hepworth said. “I’ve never had a greens crop like this.”

Charlie Paley, a Connecticut farmer who also runs Paley’s Farm Market, said he has been inundated with calls from farmers looking to sell their lettuce. Primarily a corn and tomato farmer, he did not plant greens for the height of the summer. 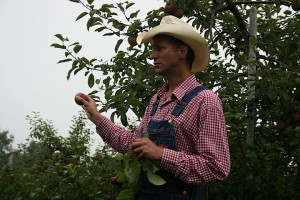 Billiam van Roestenberg did not plant his normal tomato crop this year. We visited Liberty View Farm in Highland New York after leaving Hepworth Farms. Van Roestenberg said he started his seedlings in a cold frame but lost them all when they sizzled in the frames on one hot day in the spring.

“My dad got sick with cancer and died this spring,” van Roestenberg said. “I had all the seedlings and we had a 97 degree day. I forgot to tell the guy to open the green house and the cold frames and everything died.”

Despite a small number of plants, van Roestenberg discovered the blight on his tomatoes in late July.

Liberty View Farm, known for their naturally grown apples, was also hit with apple scale this year. Although the scale does not affect the taste of the apple, the peel of the fruit becomes flecked with small brown spots. van Roestenberg said he is not overly concerned with the ascetics because in the past his apples were so perfect looking that customers often did not believe that no chemical sprays were used on the apples. His secret for pest management he said was a clay-based spray.

Hepworth Farms, also experienced trouble with their fruit trees this year. Early in the spring hail storms damaged many orchards in the Hudson Valley, including their’s.

Melanie Smith is a graduate student at Columbia University studying conservation biology. She is also a freelance journalist and edits a weekly newsletter for her Community Supported Agriculture group. Read more >