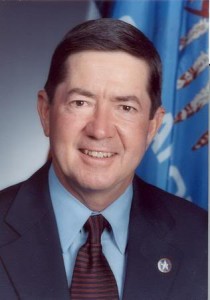 It’s not often that I get to write about a positive food policy story coming out of my home state, but it turns out that Oklahoma Attorney General (and Democratic candidate for governor in 2010) Drew Edmondson is suing the more lenient Arkansas poultry industry for its waste, which is polluting the Illinois River on the states’ shared border. This case brings the spotlight to a huge, oft-ignored issue that many legislators in other states should take note of, too: agricultural pollution.

In the lawsuit, Edmondson claims runoff from land that has been spread with chicken waste for decades has contaminated the watershed. He is suing a dozen Arkansas poultry companies that buy birds from the 1,800 poultry houses that dot the watershed in Oklahoma and Arkansas. The defendants include Tyson Foods Inc., the world’s largest meat producer.

Here’s hoping that Edmondson gets heard on this issue. I needn’t remind you that not a single Oklahoma county went for Barack Obama in the 2008 election, and that it is a stronghold for climate change deniers like Republican Senator Jim Inhofe. So, not surprisingly, Edmondson faces an uphill battle in this fight, where poultry groups are pitting workers, who they’ve told will lose their jobs, against him.

But Oklahoma could be poised to redeem itself, taking on the unsustainablity of industrial agriculture. 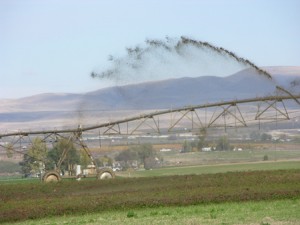 Unfortunately runoff is not just a problem in this one river on the border of Oklahoma and Arkansas. It is a huge issue that we’ve seen increase worldwide since the industrialization of agriculture and the proliferation of animal confinement operations, which took off at an unprecedented rate in the 1970s. Factory farms raising animals had to answer the question of what to do with all that excess waste (photo: liquid manure being applied to fields), which was being produced in quantities that rival the waste of small cities without a sewage system.

These are medieval conditions that could also be stoking disease outbreaks like the resistant bacteria MRSA, the salmonella and e coli that has been contaminating meat so often these days, and even possibly a cause of the swine flu. This potential for disease originating in concentrated animal feeding operations (CAFOs) is precisely why these animals are currently given up to 70% of the antibiotics taken in the United States, and by extension, why antibiotic resistance is a topic of such great importance for Congress.

Manure makes for good fertility in reasonable quantities (and hopefully without the antibiotics, which plants have proven able to take up)  — but when spread in the massive quantities operations like these are forced to distribute, excess waste washes away from fields and goes down river, where it assists, along with over-used chemical-based fertilizers, in creating dead zones: water over-enriched with nutrients, creating an oxygen-free environment where only algae can survive. In 2003, there were 146 dead zones worldwide in our oceans (the clearinghouse for all the world’s rivers and streams) and the largest measured 70,000 square kilometers. A new study in 2008 found 405 dead zones.

Algae is not just gross to look at or swim in, either. The French have recently taken increased notice of the problem of agricultural runoff, after decomposing sea lettuce, which creates a noxious gas, killed a horse on a beach on the coast of Brittany. Here at home, the Environmental Protection Agency (EPA) might consider regulating chemical fertilizer application. The woman in charge of the dead zone issue at the EPA is Suzanne Schwartz, and you can get in touch with her to let her know how you feel about industrial agriculture runoff at: Schwartz.Suzanne@epamail.epa.gov

Here is what I had to say to her in a recent email:

I am very concerned with the effects large amounts of runoff from industrial agriculture are having on our rivers and streams, and by extension, our health as a nation. As you know, a report in 2008 revealed that we now have 405 dead zones worldwide, and life in those parts of the oceans cannot be supported. These areas are near the coasts, so they also affect the air we breathe, the water we drink, tourist and recreational usage, our food supply and more. Industrial agriculture is taking a huge toll on our collective landscape, and the corporations that cause the pollution are profiting handsomely on its demise. Please support Oklahoma Attorney General Drew Edmondson’s attempt to take on this issue in the Illinois River on the Oklahoma border with Arkansas, where pollution is at its worst in that river’s history. And please take a serious stand against synthetic fertilizer and confined animal feeding operation waste runoff — these have proven in the last decades to be an unsustainable way to produce food. With your help, we can begin to shift to a new paradigm of food production.

In the United States, our largest dead zone forms every year in the Gulf of Mexico. If you’d like to better understand the process of dead zone formation, check out this excellent visualization by the National Environmental Satellite, Data and Information Service of the National Oceanic and Atmospheric Administration: