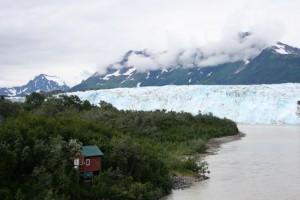 Picture an Alaskan fisherman. Now wipe the slate clean. Thea Thomas is a 52-year-old blonde who wears lip gloss and earrings when she heads out on her boat, a fiberglass vessel called the Myrmidon, named after Achilles’ warriors. She holds a Master’s degree in biology and has been fishing commercially for the past 23 years. She’s also one of the “highliners” of the 540-person Copper River fleet, meaning the volume of her catch is among the highest of her peers, all but four of whom are men.

And she wants to keep fishing, too, at least until she retires, which won’t be happening any time soon. “I still really enjoy it,” she says. “I don’t know if other people enjoy it as much as I do.”

But as much as she enjoys her work, and as much as she’d like to maximize her earnings during the open season (which runs from May through September), she understands that some days she simply can’t fish. It’s not that she doesn’t feel like it, or lacks the drive, but that she’s not allowed to. And neither are the other members of her fleet.

Why? Because Alaska’s Department of Fish & Game tightly controls when the waters are open to commercial fishing, and when they’re not. They do this for one reason: to ensure that the salmon population remains strong and that the waters off Prince William Sound and the Copper River, in southeastern Alaska, do not get overfished. Sustainability, in these parts, is not only mandated, but legislated and enforced as well.

It’s not a watertight system, of course, and there are certainly fishermen who don’t comply with the regulations, but if they fish when, or where, they’re not supposed to, they risk losing their licenses and even their boats. Fellow fishermen have been known to snap photos of lawbreakers and email them off to the troopers.

According to Bert Lewis, a regional resource development biologist with the Department, sustainability is measured in “escapement,” or in the number of salmon not harvested who escape to the spawning streams. The state determines the optimal escapement goal for each species (say king, or sockeye, or coho) and then opens or closes the fishery accordingly. So if not enough fish are “escaping,” the fisheries will close. If the numbers look strong, the fisheries will open.

Escapement is measured in a number of ways, using both high-tech and low-tech methods:

Weekly aerial surveys. Each week, the Department flies 208 streams around the sound counting the salmon from the sky. As they run, the salmon look like long dark lines. Different varieties can be separately tracked based on their unique characteristics. Chums, for example, are bigger and distinctly colored; sockeye travel in smaller groups; and pinks are so prolific they’re counted by the tens of thousands. “We’re not counting every fish,” says Lewis, “but we use it as an index of abundance.”

Sonar. Even if it’s too cloudy for an aerial count, the Department can rely on its sonar system. Salmon tend to swim up against the banks of the Copper River when the currents are strong, and they emit sounds that are captured by a laptop set up at a nearby sonar station. You can actually see the salmon swimming by on the monitor. According to Lewis, the employee on duty counts the salmon for 10 minutes on the top of every hour and then uses this statistical subset to extrapolate how many will pass by in a 24 hour period. These numbers are then applied to the overall escapement goals.

Otolith marking. Now here’s where things really get interesting. Though all of the Alaskan salmon are wild (as opposed to farmed), certain fisheries do use a hatchery system. When wild salmon return to their breeding grounds to spawn, their eggs are taken and kept over the winter in a controlled environment, but with a natural flow of water. This process, which the locals refer to as “ocean ranching,” increases the survival rate of salmon fry up to tenfold. But it’s important to keep track of which fish are hatchery fish and which are not, so the fish are marked; the water in the hatchery is manipulated by heating and cooling it at different temperatures over different intervals of time, which creates marks on the tiny bones in the fish’s head called the otoliths. When these salmon, which are released into the natural plankton bloom, return to spawn, the Department of Fish & Game studies a subset of their otoliths to determine which hatchery they’re from and whether the stocks have mingled. These numbers all factor into the escapement goals as well.

There are some controversies. For one, the salmon are supposed to home back to their original hatcheries, but they don’t always do so. And second, sometimes the hatchery fish stray into the wild population, which can negatively impact genetic diversity and inflate the wild salmon numbers, causing escapement goals to appear to be met when, in fact, they haven’t.

Even with these issues, Alaska’s wild salmon is consistently ranked high on lists of sustainable seafood choices.

There’s a human element to the sustainability equation, too. I asked Mike Poole, a salmon fisherman with the Copper River fleet, whether he was tempted to fish even when the waters were officially “closed” — you know, to try to catch more fish and, obviously, to make more money. He shook his head hard. “We have sons in the fishery,” he said, gesturing toward his colleagues. “We want them to be able to fish in 10 years, too.”

[Editor’s note: Check out Samual Fromartz’s video of fishing on the Copper River, and visiting the processing and sonar facilities there over on his great site Chewswise]