Late Blight on the Roof, and the Small Farmer's Plight | Civil Eats

Late Blight on the Roof, and the Small Farmer’s Plight 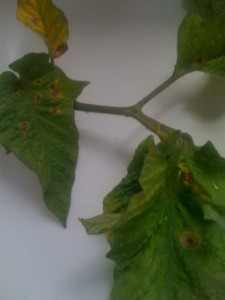 Two weeks ago, I noticed that two of my tomato plants had late blight. I was up on the roof, weeding, pulling off yellowing leaves from all the excess rain, and harvesting some early tomatoes when I noticed leaves with yellow and brown spots on them. I’d read the article in the New York Times about the blight, and so I sent out the photo on the left to Twitter, asking my followers, “is this the blight?” The answer, sadly, was yes. So I pulled one plant up, before it could spread to the others, and took all the leaves off the other plant which was confined to a corner, hoping to let it’s three giant tomatoes ripen.

Unfortunately, rooftops are not immune from the soil disease that ravages spuds and tomatoes — I bought my seedlings from two small nurseries upstate, which had grown them locally. But it is possible that contamination had already spread to my tomatoes from the nurseries’ neighbors who bought their plants at big box stores like Lowe’s and Wal-Mart, which sold plants in soil from an Alabama facility that carried the blight. Ironically, it is new growers’ enthusiasm that might have exacerbated the disease through increased consumer demand. And while a record number of people are growing some of their own produce this year, excess rain in the northeast has created the perfect conditions for the blight to flourish — but it is small organic farmers that are taking a punch.

Last week I spoke to some of the farmers at the Union Square farmer’s market. Three of my favorite sustainable farms are not spraying, even though it means a losses of up to $25,000. It’s a depressing worse case scenario. Amy Hepworth, the farmer at Hepworth Farms (my CSA) and Kira Kenney of Evolutionary Organics, both places from whom I normally get beautiful tomatoes for eating and canning, have sustained big losses this year. Another of my favorites farms, known for their tomatoes, has decided to spray to save their harvest — for the first time in 14 years. It’s hard to tell farmers not to spray. As M.K. Wyle wrote on Civil Eats last week, its painful to watch all of that work be destroyed in one fell swoop.

So what can be done, and is this just the farmer’s gambit? On my rooftop, I’ve planted salad greens and kale in the place of my missing tomatoes. But for small farms, most of which grow diverse crops and often don’t qualify for disaster insurance, such a loss could put them further into debt and make their ability to grow in the future uncertain. It is possible that had plants been grown from seed nearby, and soil stayed in its region, we wouldn’t see the blight spreading like it is through the northeast. So should small farms bear the brunt of the burden alone?

Governor Paterson doesn’t think so. He requested recently that the USDA designate 17 New York counties as agricultural disaster areas. If these counties get this designation, low-interest loans will be made available based on the extent of the losses.

But loans aren’t ideal. I’m glad that the option is there, but how about better supports in Washington for diversified growers, who support a healthier population and healthier soil? Loans are more like a band-aid, after the fact. Growers of cotton, soy, wheat, corn and other non-perishable commodities are protected because they are the biggest producers, and as such have the most detailed crop histories, lobbies, and of course that longer shelf life.

Getting crop insurance is based on data sets and tables which are essentially a history of a certain crop’s performance. According to Scott Marlow, of the Rural Advancement Foundation International, there is precious little information being gathered on USDA-designated “specialty crops” (around 10 million acres planted according to the 2007 census, a fraction of the total 310 million acres planted in the US), like tomatoes, and so it’s harder for these farmers to get coverage. It is also harder for them to get loans, which are often based on crop insurance.

Furthermore, planting restrictions put in place by the federal government aim to keep specialty crops at that 10 million acres so as to control prices. If a farmer shifts from commodity crops to specialty crops, they lose the payments on their land. All of this means that a farmer has to feel really passionate about diversified growing, because they are managing their own risk most of the time. And the growth of the local food movement gets stifled by these realities, too.

But I would argue that the farmers growing perishable fruits and vegetables are our insurance policy against future preventable disease; that, in fact, our health is rooted in this issue.

I may be able to withstand losses in my little plot, (an experiment in growing, really) but small farmers cannot. Let’s change the inherant unfairness in our system that favors big over small farms by pushing the goverment to re-evaluate these policies. Indeed, the future of local food is at stake.