Kitchen Table Talks: What We Can Learn about Community Building from Quesada Gardens in Bayview Hunters Point | Civil Eats

Kitchen Table Talks: What We Can Learn about Community Building from Quesada Gardens in Bayview Hunters Point 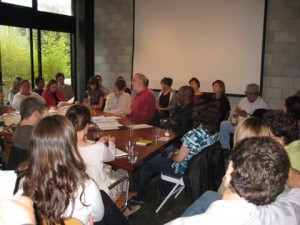 Jeffery Betcher was clear — he and his fellow organizers consider themselves community, not food, activists. Betcher, co-founder of the successful Quesada Gardens Initiative in the Bayview Hunters Point Neighborhood of San Francisco, was joined by fellow co-founder and board co-vice chair James Ross as featured presenters at Kitchen Table Talks’ third installment: Community Organizing: Addressing Food Access and Security in Bayview Hunters Point.

For decades, Bayview Hunters Point (BVHP) has been much maligned for regular reports of violence, environmental hazards and poverty. Betcher, a 10-year BVHP resident, believes the neighborhood doesn’t deserve its negative reputation. It has many strengths, including the highest rate of residential property ownership in the entire city, and many of its residents are thriving despite enormous environmental and economic injustices.

Ironically, this neighborhood that now processes 80 percent of the city’s waste, used to be the primary food shed for the city; a lively patch work of pastureland, vegetable farms, breweries, slaughter houses and food processing and shipping facilities. Studies show that there’s a $30 million potential for profit from food production in BVHP Hunters Point, said Betcher.

As its landscape shifted from breadbasket to toxic industry and waste processing, its residents increasingly suffered the highest rates of cancer, asthma, diabetes, obesity and heart disease. While asthma and cancer rates have been tied to environmental conditions, all other health-related issues prevalent in BVHP are food related. “All the –isms are there here,” said Betcher. “Poverty is the fundamental problem.”

While the problems are obvious, solutions are harder to come by, said Betcher and Ross. For solutions to stick, they need to be not only accepted by residents, but owned by them. This is the secret to Quesada Gardens’ success. “If people are involved in change, they will reinvest in community,” said Betcher.

Ross and Betcher believe that once you gain consensus, people will not only accept an initiative, but work hard to advance it. This was why a food survey, led by Quesada Gardens as a project of the Southeast Sector Food Access Working Group in 2007, was a critical step to help organizers understand what residents really wanted. “We know there’s a lack of fresh produce options in the neighborhood, but how do we know the residents want a supermarket?” said Betcher. Of the 562 residents surveyed, 95 percent said they would “actively support new food options,” 58 percent said they wanted a co-op market and 53 percent said it was important to have foods free of pesticides and chemicals. 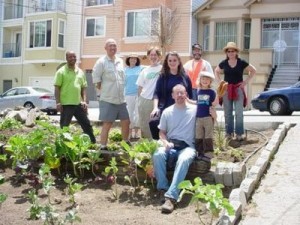 Started with one garden on the median of Quesada Street, the initiative has grown to include 14 individual backyard gardens and nine community gardens. Residents are relishing in the abundance of fresh fruits and vegetables they are growing and readily sharing it with elderly and hungry neighbors. But something even more fundamental has sprouted that is changing the fabric of the neighborhood. “People are coming out of their homes. They’re meeting their neighbors. They’re looking out for each other,” said Ross.  He has lived intermittently in BVHP since the 1980’s. “This is the first time that I know everyone on my block. The garden has become a safe place for people; a place to gather instead of the street corner.”

When asked about how they avoid vandalism and other forms of destructive resistance, Ross pointed to the community’s feeling of ownership of the gardens. “When there is vandalism, it comes from outside the neighborhood. Everyone on the block is looking out for the community gardens and their neighbors’ gardens because they feel a sense of pride and involvement,” said Ross. “People are more aware now. They will come outside and spend time with their neighbors instead of closing their doors.”

After hearing an overview of the Quesada Gardens Initiative from Ross and Betcher, a lively conversation among a record crowd of Kitchen Table Talks attendees followed.

When the question was asked, “what happened to SLUG,” — the San Francisco League of Urban Gardeners — Paula Jones, Director of San Francisco Food Systems and former SLUG Director of Urban Agriculture, pointed out that the urban agriculture movement is thriving, but an organizing framework for all the disparate groups such as the one that SLUG once provided would be ideal.

The million dollar question of the night: if so many people want supermarkets in BVHP, why aren’t there supermarkets? “There is a misconception that there’s not enough money in poor neighborhoods. Corner stores gouge their customers with a huge mark up,” said Oriana Sarac, founder of Neighborhood Fruit. Oakland’s HOPE Collaborative Project Manager Hank Herrera offered the insight that structural racism keeps supermarkets out of poor neighborhoods. He said this is true in every city across the country. “The most important thing we can do is support local ownership and local supply chains.”

“What about the cooking factor,” asked FarmsReach Founder Melanie Cheng. This Sunday’s New York Times magazine feature article by Michael Pollan, Out of the Kitchen, Onto the Couch, drives this point home. Betcher told the group that there are cooking classes being offered in BVHP, but more are needed. Hai Vo, who worked on UC Irvine’s Real Food Challenge, stressed the importance of youth engagement.

The importance of commercial kitchens was brought up and Betcher told the group the BVHP mainstay Eclectic Cookery was considering shutting its doors. Susan Coss, Kitchen Table Talks co-founder and catalyst for bringing this conversation on community organizing together, stressed that a commercial kitchen must pay for itself to survive.

Betcher offered, “While other sectors of the economy are bleeding, social entrepreneurship is alive and well. BVHP really needs businesses committed workforce development.”

Despite the progress Quesada Gardens has made, Betcher stresses that the organization is in the “infrastructure building phase” and that while the project is mitigating climate change and health issues, the real focus of the initiative is community building. “We need people, especially funders, who get community building,” said Betcher.

Quesada Gardens is an inspiration, not just for other blocks in BVHP, but for all urban dwellers everywhere, starving for community in the neighborhoods where they live. Even if a community garden isn’t possible in your neighborhood, the simple act of spending a little time with your neighbors can yield fruit.

Things you can do: