Are We Really What We Eat, or How We Act? | Civil Eats

Are We Really What We Eat, or How We Act? 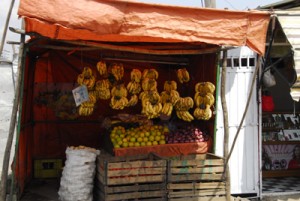 It is often said: You are what you eat, and increasingly in this day and age we come to define ourselves by our food habits.  Are you a vegetarian or a vegan?  Are you a compassionate carnivore or a junk-food junkie?  Are you a locavore?  A raw foodist?  An omnivore?

We choose these labels for ourselves because they in many ways reflect our core values. Do you believe that ultimately it is the local connections that you make in life that matter?  Locavore it is.  Do you believe that all life, from the cows in the field to the ants running through your kitchen cabinets, need to be honored and not eaten?  Vegan is the choice.

But in addition to these personal reasons, many of us eat the way we do because we believe that it makes a difference in the greater world.  We believe that if enough of us “vote with our fork,” we can change the very food system that feeds us.

In a blistering new essay by Derrick Jensen in the July / Aug issue of Orion magazine, he starts by asking us: “Would any sane person think dumpster diving would have stopped Hitler, or that composting would have ended slavery?”

His point is that individual consumer choices are not a substitute for working toward real political or social change.

I want to be clear. I’m not saying we shouldn’t live simply. I live reasonably simply myself, but I don’t pretend that not buying much (or not driving much, or not having kids) is a powerful political act, or that it’s deeply revolutionary. It’s not. Personal change doesn’t equal social change.

I believe Jensen’s is a powerful argument, but only slightly less so when it comes to food.  For example, he writes:

We so often hear that the world is running out of water. People are dying from lack of water. Rivers are dewatered from lack of water. Because of this we need to take shorter showers. See the disconnect? Because I take showers, I’m responsible for drawing down aquifers? Well, no. More than 90 percent of the water used by humans is used by agriculture and industry. The remaining 10 percent is split between municipalities and actual living breathing individual humans.

To make a difference we need to change that 90%.  So that short shower might not be the solution, but changing our agriculture system just might, which in turn will surely change our eating habits.

This leads to the next point:  instead of putting so much political emphasis on what we eat, maybe we should spend more time writing letters to our representatives and organizing to change the system directly.  Let’s spend our eating energy on growing, buying, and cooking what’s healthy and tasty for our families, and hopefully have some time leftover for direct engagement.

When it comes to our food, it’s clear that we need to be doing both simultaneously.  Just be sure to finish that grilled summer vegetable sandwich before your homemade pesto gets all over those letters.