Tomato Disappointment: A Farmer's Perspective on Late Blight in the Northeast | Civil Eats

Tomato Disappointment: A Farmer’s Perspective on Late Blight in the Northeast 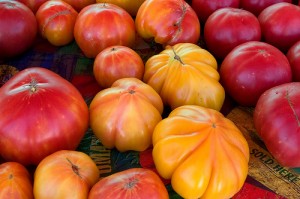 I have an entire cookbook devoted to tomatoes.  Admittedly, I have a lot of cookbooks, but tomatoes are the only vegetable in my kitchen with an entire cookbook singing their praises.  But then, they are tomatoes, the crown of the summer growing season and the crop that can make or break a small vegetable farm.  Every strange vegetable from kohlrabi to escarole has its devoted fans, but tomatoes are as much of an American summer institution as baseball and 4th of July fireworks. Tomatoes are the crop that everyone is waiting for.

For those of us living in the Northeast this year, if could be a long wait.  Earlier this summer, tomato transplants sold in Lowes, Walmart, and Home Depot carried the spores of Phytophthora infestans (literally “plant destroyer” in Latin) into the Northeast, where a cool, wet summer provided ideal conditions for an epidemic.  Phytophthora infestans, more commonly referred to as late blight, is an incredibly contagious plant disease, which can knock out entire fields of tomatoes and potatoes in a matter of days.  Late blight was the cause of the infamous Irish Potato Famine of the nineteenth century—this is a plant disease which means business.

Normally, late blight does not affect the Northeast, as cold winters prevent any spores from wintering over.  In the south, where late blight can survive winter, the high heat of summer holds the blight in check and prevents the total crop loss that Northeastern farmers now dread.  What happened this year is the worst case scenario only possible in an industrialized food system.  The disease overwintered in an Alabama nursery, which then shipped infected plants to the Northeast and spread the blight far more quickly and ubiquitously than the disease ever could have traveled on its own.

At the farm where I am working, late blight has been creeping ever nearer for the last two weeks: first it was in all the states surrounding Massachusetts, then it was in nearby counties, then it was here, in Berkshire county, until Friday, when my boss, Don, found the first blighted tomato on our farm.  We had eaten our first cherry tomatoes on Monday.

I’m sure that to a non-grower, this all seems a bit histrionic.  And it is true, no one has died, nor has the farm been hit by a catastrophic natural disaster.  Many of our other crops are flourishing, despite the seeming perma-cloud that has been draping our state as of late.  And we’ll get a harvest of potatoes, albeit a much smaller and less storage-worthy one.  But remember this: we’ve put more hours into these two crops than any others: we built an entire hoop house for tomatoes this spring, showered our transplants with attention, mulched 2800 feet of tomato beds with straw, trellised all of the tomatoes at least three times, and in the potatoes, we’ve spent hours scouting for Colorado potato beetles and picking them off by hand.  Our crops are thriving, or were, before Friday.  All of our plants were uncommonly healthy and robust, flowering and fruiting with verdant abandon. 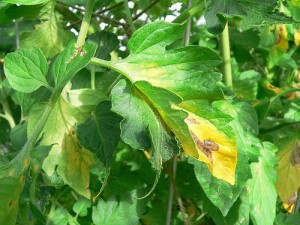 With the blight in our fields, though, we know what comes next.  Brown spots and downly fungus on the leaves, black spots on the stems, rotting green fruit, and a lot of empty space on the farm.  Every document from every extension office, no matter how green, is sending the same message this summer: spray something (organic or conventional) or lose your tomatoes and potatoes.  There is literally nothing else we can do.  Conventional growers have a number of spraying options; organic growers are permitted to use a copper spray.  On my farm, we won’t spray anything, ever.

For the first time, I can truly understand the desire to spray.  Last year, when bean beetles decimated our green beans and edamame, the thought flickered through my mind, but now, poised on the brink of losing the entire harvest of a crop that on many diversified farms generates 20 or more percent of the annual revenue, I can see what drives a farmer to don a backpack and a mask and start reading chemical warning labels.

For me, however, it was the warning labels that helped me make peace with our decision not to fight.  Here is how one extension service bulletin describes copper fungicide, the certified organic choice (which is only a stopgap measure in terms of effectiveness):

“Corrosive.  Causes irreversible eye damage.  May cause skin sensitization reactions in certain individuals.  Do not get in eyes or on clothing.  Harmful if swallowed or absorbed through the skin.  Avoid contact with skin.  Avoid breathing dust.  Personal protective equipment that applicators and other handlers must wear when using copper is: long-sleeved shirt and long pants, chemical-resistant and waterproof gloves, shoes plus socks, and protective eyewear.  First aid information is also provided on labels for accidental exposure, know this in advance to avoid delay in treatment.”

I recently received an email from a friend apprenticing on a nearby farm, where they had chosen to fight the blight by spraying.  “Ethically, I’m opposed to spraying “ she wrote, “yet I helped [my manager] initiate a spray plan and spent ten hours with a mask and backpack.  That felt like sin.  At some point I spotted infected potatoes.  That was hard to break to her…”

Farmers who spray preventatively—once a week, or more often if there is rain—stand a chance of wringing a harvest out of this terrible season.  As the only folks with local tomatoes, they’ll be able to charge unheard of prices for them.  At the same time, those sprays will be slowly nurturing stronger, more virulent strains of the blight.  My farm is a CSA farm, so the loss of our tomatoes won’t mean financial ruin (unless angry shareholders boycott next year due to this season’s tomato failure).  Other farmers depend on the tomatoes for financial solvency.  They are good farmers; they have done everything sustainably, with sweat and skill and passion.  Do they spray, against everything that they believe in, or accept a massive financial hit in an already challenging year?

On Friday night, after receiving the bad news, I walked down to our plum tomatoes, to the small empty spot where my manager had removed the first telltale plants.  The neighboring tomatoes still stood tall and strong, and a heady tomato perfume hung over that section of the field.  This is a tragic reality check for young farmers, that our path is not always hard work leading linearly to good eating.  But it need not spell the end of our dreams or indeed of the local food movement.  Now more than ever, Northeastern farmers need the support of their customers.  They need CSA members with the grace to accept why their tomatoes are missing this year and market-goers who understand the devil’s bargain many farmers were forced to make.    This is a year that can teach young agrarians humility and restraint and gratitude, if we can bring ourselves to seek it.

Photos: heirlooms by clayirving, late blight on leaves by jmignault