Rooftop Farms: The Start of a City-Farmer Revolution | Civil Eats

Rooftop Farms: The Start of a City-Farmer Revolution 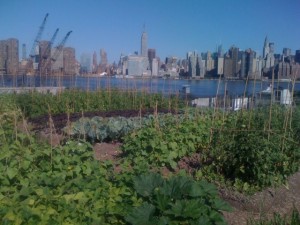 Last Sunday, I had the pleasure of lending a hand as a volunteer at Rooftop Farms in Greenpoint, Brooklyn. The name says it all: it is a 6000 square foot urban vegetable farm on the roof of an industrial building, growing rows inter-cropped with lettuces, tomatoes, eggplants, cucumbers, kale and much more, which they sell directly to restaurants and at a farm stand inside the building every Sunday from 9am – 4pm.

Annie Novak and Ben Flanner are the farming minds behind the project. Both are passionate about how food gets to our table (Novak works with farmer with Kira Kenney of Evolutionary Organics at the Greenmarket, and works as the Children’s Gardening Program Coordinator at the New York Botanical Garden in the Bronx. Flanner is new to farming but seems to get a kick out of hawking produce). Chris and Lisa Goode of Goode Green, a green roofing company, found the roof and funded Rooftop Farms as a test. With this project, the team hopes to determine what is possible in terms of scale for growing on rooftops in the city.

Flanner was managing the farm stand while I was there, encouraging everyone to try a tomato, or a leaf of the alternative sweetener stevia. Most of the people who came by were neighbors. The stand quickly sold out of red and green kale, and I joined Flanner in the field selecting the largest leaves for new bunches.

Novak, meanwhile, handled coordinating the fifteen or so volunteers. On Sunday we removed sweet peas plants (the season had ended), harvesting the beans and breaking down the rest into compost. We also harvested lettuces growing in between the tomato plants, planted radish seeds (the Rooftop Farms radishes have been quite a hit with local restaurants like Marlow and Sons and Anella, and they get quickly bought out by the neighbors at the farm stand, too), applied fertilizing compost tea and did pest management, among other tasks. As a new grower myself, I found it all to be quite educational; Annie showed me some pests to look out for in my own garden, and she gave me some information on how organically minded growers are dealing with the tomato blight. (Luckily Rooftop Farms grew almost everything from seed, and are not as worried as they would be with transplants, but she is still taking precautions like spraying copper in some areas.)

This is part of the point for her: She wants others to jump in and learn and hopefully create their own version of what Rooftop Farms is doing in other parts of the city. One rooftop is enough for Novak for the time being, as what needs to be done there is at times keeping her up at night. But what they are doing is replicable, and she is willing to teach all who come to help out about her methods.

One of the first questions she often gets asked is about the soil: they had to lift all 200,000 lbs to the roof with a crane. And yes, an engineer was brought in to get clearance on the weight. The soil is a mix containing shale, a light material made specifically for rooftop applications. But as Novak tells it, they are experimenting with growing vegetables instead of sedum, the succulents considered the standard green roof plant species. The experiment seems to be working, as they’ve harvested 600 pounds of produce since early June, and the tomatoes and cucumbers are just getting started. 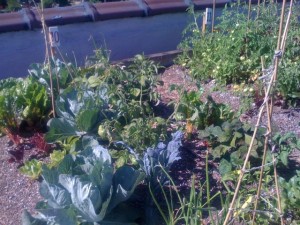 Novak wants even beginners, or New Yorkers without much growing room to get in on the act. One row on her farm even showcases what can be done in a small plot. “The square foot bed is an example of the amount of space a renter might have,” she said. “We’re using that space to show that you don’t have to be confined to one tomato plant.” (In photo, vegetables growing together include swiss chard, cabbage, tomatoes, lettuces, peppers, beans, onions and more)

The roof is exposed from all directions, overlooking the East River and a glorius view of the city. Novak said that it can get windy, but that the plants compensate when grown from seed by growing denser, deeper root systems and heartier stems. Standing on the rooftop soaking in the lush rows and the abundance of food growing there (not to mention the view) was enough to make an urban farmer out of almost anyone.