The Seeds of a New Economy | Civil Eats

The Seeds of a New Economy 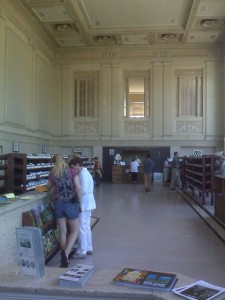 With the economy in shambles and banks closing across the country, a ray of light has appeared: a former bank in Petaluma, California has been reborn as a new heirloom seed bank. And the timing could not be better. From the White House garden to your garden, growth in the good food movement, coupled with a recession and concerns about food safety, has led to a resurgence in seed sales and revived interest in growing, canning and cooking your own. Imagine: out of the failing financial institutions languishing on the Main Streets of America, real economic stability and prosperity taking root and blooming. Empty banks across the country could be transformed into warehouses of independence and sustainability.

Less than an hour north of San Francisco, the aptly named Seed Bank is the brain child of Jeremiah Gettle, 28, founder of Baker Creek Heirloom Seeds based in Mansfield, Missouri. Gettle said he was searching for an historic site and fell in love with the building, the former Petaluma County National Bank. He felt Petaluma, located in Sonoma County, was the perfect spot. “This whole region is full of people growing, eating and supporting local food,” Gettle said. “In California, half of our customers live within an hour’s drive, and they’re very excited that we’re here.”

Store Manager Paul Wallace said that the Seed Bank has been packed since it opened in early June with people from all over making the pilgrimage to marvel and buy rare seeds. (Weekenders, take note: for now, the Seed Bank is only opened Monday through Friday.) Bestsellers include carrots, squash, melon and beets (so there, President Obama). The store plans on selling local producers’ artisan foods and crafts, including tools. Wallace said that the magnificent hall will also serve as a community center and gathering space. 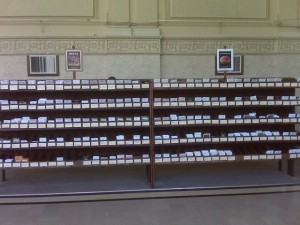 The building has been transformed by beautiful handmade wood shelves built to order by Amish crews brought in from the Ozarks. Row after row of neatly stacked packed heirloom varietals of lettuces, tomatoes, radishes, herbs stand at attention in their individual boxes. Light flooding in through the bank’s high windows illuminates the brightly painted signs, which read, “Pure, natural non-GMO seeds and sundries” and “Save money invest in your garden.” Along with an incredible array of seeds, the store stocks many books, magazines and a few gardening knives.

Homeschooled in the Ozarks, Gettle was raised in his family’s gardens, where they grew dozens of melons and vegetables and saved seeds. His own first crops were scallop squash and yellow pear tomatoes. He started his first seed catalog in 1998, at the ripe age of 17 when he noticed that seeds were starting to disappear from catalogs. He began by growing and collecting seeds during his journeys around the world. Today Baker Creek Heirloom Seeds offers 1275 unique heirloom seeds, all of which are open-pollinated—seeds that come back true each generation—and GMO-free. The company offers varieties from 70 countries produced by a network of 50 farmers. The catalog has grown from 550 subscribers to over 200,000 customers, making it one of the largest heirloom seed providers in the country. (Hear Gettle talk about Baker Creek in a post with a video on Civil Eats from earlier this year.)

For now, Gettle is considering other cities in which to open seed banks. Top on the list in California are Santa Barbara, Vista or Oceanside. He has his sights on the Golden State because of its incredible growing potential and groundswell of interest in seeds. On the east coast, Gettle said he’s considering Nashville, North Carolina. His first priority, however, is to find historic buildings. (Gettle’s somewhat of a nostalgia buff and also runs Bakersville Pioneer Village. For a seemingly low-tech guy, he’s even got a YouTube channel.)

“Seed saving is so important because it preserves the history and the flavor of these unique varieties,” explained Gettle. “Many large corporations are taking control of the food supply, without caring how food is grown, or how the farmers who grow it are treated. We’re interested in both and keeping heirloom varieties alive.”

For more information on heirloom seeds and gardening: