(VIDEO) A Perspective on Agricultural Sustainability: A Farm for the Future | Civil Eats

(VIDEO) A Perspective on Agricultural Sustainability: A Farm for the Future 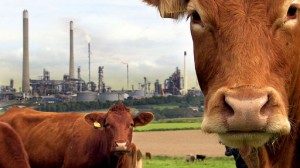 Oil is history, and food as it is currently produced and eaten is going the way of the dinosaurs, too. So what are our real options for producing food to feed our population? A great one hour film called A Farm for the Future from the BBC seeks to answer this very question by investigating some of the methods for making real sustainable changes to a livestock farm in Devon, England belonging to the narrator of the film, Rebecca Hosking. There are no easy answers, but she discovers one root of unsustainability on farms is the energy we put into working against nature. While speaking to permaculture expert Patrick Whitefield, she asks if what he is proposing is “to design the energy out, or design the labor out” of the system. To which he replies yes, on both counts.

Hosking visits a number of experts who have developed systems — like for example, the livestock farmer that has stopped tilling the land every year, and produces grass made up of twenty or so varieties with dense root systems, such that the cows can remain outdoors year round without destroying the pasture. Otherwise, the narrator says, tractors must produce the bails of hay that are then brought to the animals indoors. Tilling also brings up the valuable living soil, exposing earth worms and other creatures to the elements and to predators like birds. Eventually the land is drained of its life, and must be showered with fertilizers, herbicides and pesticides, because there are no longer any natural defenses left to protect the crops.

Those natural defenses are the outcome of biodiversity, which some current legislation in the United States could require farms to do away with in a misguided measure for food safety. Living soil breaks down waste and produces fertility, having flowers that invite pollinators encourages better yields, bird life means natural sources of phosphate (instead of mining it for fertilizers that then get washed away). This is working with nature, and requires less energy to produce more.

The film features small-holder permaculture farms where diversity of plants, animals and insects in mixed wooded and open land, resulting in low energy and low maintenance abundance — up to five times more food than can be produced in open fields under current methods. One such grower estimated that you could feed ten people on an acre in such a permaculture system. The one catch, you cannot grow the amount of cereals that we consume this way. This could prove the hardest sell: a diet made up of a lot less grain.

Unfortunately in the U.S., permaculture is not often discussed. Systems like these are also never studied to compare with our current chemical and oil-intensive systems of growing food, so as to see a real comparison. This is because Big Ag is paying for most of the studies performed by researchers, and therefore they are skewed towards developing new technologies. Also, we would need a million new farmers in short order to begin to change the system, and to get there, we’d need to admit that the system we have no is not working and put legislation in place to help small farmers thrive.

Unfortunately, if we don’t begin to try out alternatives now, it could be too late when the oil runs out and we are forced to find out what works through trial and error.  I highly suggest taking a look at this program, A Farm for the Future, as it gives insight into improving the methodologies behind farming that I haven’t seen anywhere else.