If You Build A New Food System Tool, Will They Use It? | Civil Eats

If You Build A New Food System Tool, Will They Use It? 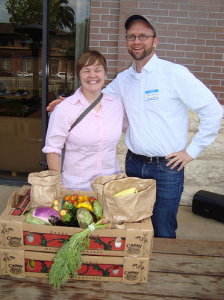 Melanie Cheng is waiting patiently. It’s 2pm on a Saturday and the launch party she’s hosting for her new web platform, FarmsReach, on the patio at Americano Restaurant and Bar in downtown San Francisco is just getting going. Chef Paul Arenstam is grilling sliders, and a long table displays a bounty of local vegetables. This could be any old recession-friendly website launch, but today’s guests are farmers and chefs, and the product – a set of online tools to connect local food producers to buyers — is intended to do more than make a quick profit.

“A lot of the chefs have called me to tell me they’re running late because they slept in” Cheng says. Meanwhile, the farmers in attendance are just knocking off after long days of selling at the Ferry Plaza Farmers Market across the street, days that started as early 4 am for some. This profound difference in schedules might be one reason why, even in a city known for cultivation strong ties between restaurants and local farms, Cheng believes there’s a role for technology that can strengthen those ties and ensure local food always a solid market.

FarmsReach buyers place orders online and pick them at a local farmers’ market or have them delivered to their door. The idea, says Cheng, who has been working on ways to improve the food system with technology for years and founded a nonprofit called Om Organics in 2002, is to make the whole process more predictable, and much easier to track. Before FarmsReach, she adds, “producers didn’t know what to bring to market, or whether they’d wind up driving it home. And if they did deliveries, they lacked a good way to share their availability, delivery schedules and routes with buyers. New buyers didn’t have an easy way of finding producers either. Now, a restaurant can type in “Kale” and see a range of producers, deliveries, and pickups.”

Since the FarmsReach soft-launch in February, Cheng says she has gotten around 100 restaurants and around 25 producers involved. The initial core audience is made up of Bay Area chefs, and once this group of beta testers help shape the software, the goal is to engage a whole range of institutional buyers from places like schools and hospitals, as well to expand to other geographical areas (Austin, LA, New York, DC, and parts of Canada have already expressed interest).

Built by a team of Silicon Valley developers, the software was created with scalability in mind, and Cheng believes it has the potential to outpace similar projects – most of which have been initiated by nonprofits — over time. She also envisions it allowing for an increased mobility on both sides of the marketplace.

“Today, it may be a website,” she says, “but in a few short years, mobile devices will mean quick order placement, confirmation and tracking that simply wasn’t possible until now.”

Melanie’s patience begins to pay off as more chefs appear at the party. One tells Cheng he has a 30-top to prep for that night and can’t stay long.

Amelia Petrovic, a Farmsreach employee in charge of chef outreach appears carrying a box of summer stone fruit. She’s spent her morning picking up orders for chefs who don’t have time to stop at the market and gathering them at a nearby curb so they can pull in and grab their produce. Petrovic says she’s heard from more and more chefs who don’t have time to spend at the market.

“In this economy, so many of them have seen their budgets and staffs cut,” says Petrovic. “For some, the only way they’re able to source local produce is by coming to the market on their own time.” Most, she says are glad to have some added support.

While Cheng believes producers want an efficient experience (“they need to grow the right food, and get it to market efficiently. Anything outside of that is a distraction”), she’s also aware that community is a crucial element of the chef-farmer exchange. At the recent Roots of Change Foodshed summit, Cheng had the opportunity to brainstorm the future of local food distribution with market managers and food system experts from all over the West Coast. In the end, she says, the idea that had the most traction was that of farmers’ markets as hubs. Some participants even imagined building a wholesale market on top of a farmers’ market, which would allow for a whole range of interactions, without losing the community feel of today’s farmers’ market.

Cheng sees technology as a crucial way to scale up regional food sales, but the farmers she works with might be harder to convince. One Marin farmer at Saturday’s party had only sold 15 pounds of product through FarmsReach that day. But, he said he was willing to stick it out and watch it grow.

“We know farmers are a skeptical bunch — and rightly so,” says Cheng. “Lots of people have tried to tackle the food supply in the past. So we want to be sure we’re solving a producer’s most pressing problems.”

As with most disruptive technology — innovation like Skype and MP3 players that improves a product or service in ways that the market does not expect – Cheng believes its possible that farmers might not know they need her product yet, because nothing like it has ever existed. She points to organic citrus growers, who often have to sell their oranges to juice companies for much less than they can get for them whole, and other mid-scale producers who tend to find themselves riding the roller coaster of demand.

Cheng and her team believe they can supply seatbelts for those producers. Now, it’s just a question of when they’ll start using them.

Photo: Fran, who leads wholesale sales for Capay Organic Farm, and Tom Grace, in charge of Programs for FarmsReach