With a Gust of Wind, An Iowa Crop Duster Can Squash an Organic Farm | Civil Eats

With a Gust of Wind, An Iowa Crop Duster Can Squash an Organic Farm 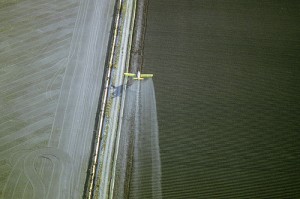 Grinnell Heritage Farm is 152 years old. Andrew Dunham is the fifth generation of his family to work this land about 50 miles east of Des Moines. He is a direct descendant of Josiah Grinnell, founder of the town and the man Horace Greeley once famously quoted as having said, “Go west, young man, go west.” Andrew and his wife Melissa are a few months shy of receiving their formal certification as an organic farm.

Across the road, due north of their land, is a field of corn that is managed by the nearby Monsanto seed corn plant. In Iowa and anywhere commodity corn is grown, it is common practice around this time of year to use chemicals to control fungus. Often this is accomplished via the use of aerial application, commonly referred to as cropdusting. On July 6th, a rustic-looking old biplane swooped in to spray Monsanto’s field. To put it mildly, the pilot’s bombardiering skills were not what one would hope.

Dunham’s crew was in the field picking broccoli and spinruts (“turnip” backwards—a Japanese form of the root vegetable). They witnessed the plane as it failed to shut off its spray mechanism in time, and the fungicide drifted into their tree planting and hay field. “The hay ground is in the third year of transition and would have become organically certified on September 1st,” Andrew said. Now, probably not.

You’d think that this would be a clear-cut cause of action, as the legal folks would put it. But the clever folks at Monsanto hire the crop dusters as contractors, and they in turn use a corporate shell with no assets, so when something like this happens and a victim sues, they simply file bankruptcy and then form a new corporation.

Iowa is the single most radically altered landscape in the country. No state has changed more since the arrival of European settlers, and today the land is heavily “mono-cropped.” Nature abhors a lack of diversity, but pathogens love it so farmers respond with more and stronger chemicals to fight off the bugs and weeds and fungi. No one owns the airspace, so planes can fly over any land they choose. Even if the pilots are incredibly accurate, Iowa is a windy place (thus the massive increase in wind energy production here in recent years). Drift is practically inevitable.

Last month in Mississippi, the Clarksdale Press-Register ran a story about the problem of chemical drift. They spoke to a pilot:

Bob Howard, owner of Howard Flying Service, says crop dust pilots like himself are often unfairly singled out as the culprits of drift damage. Howard points out many farmers apply herbicides and pesticides from ground rigs, which if done in high winds, is also susceptible to cause drift injury.

The risk of dusting an off-target field with Roundup is something Howard says is always in the back of his mind when working.

“If everything was Roundup Ready it would be the greatest thing in the world,” Howard said. “If they would all go to Roundup Ready or all go back to conventional farming it would sure be a lot easier on us.”

I’m not sure I would even know where to start with this guy, but let’s try the part where he says that the risk is something that’s “always in the back of his mind.” The back? It’s stunning that someone so obviously shortsighted was able to obtain a pilot’s license. His apathy toward his community and flagrant self-centered simple-mindedness are indicative of the unconscious conspiracy to which so many are a party. They have all been bamboozled into believing in “Better living through chemistry.” So much so, in fact, that the methods most farmers have used for a mere few decades are called “conventional,” and the few who practice farming as it was done for millennia are the outliers. Monsanto’s website even claims that they are “Growing yield sustainably.”

Farmers like Andrew Dunham can do little more than stand in their contaminated fields in stunned silence as Monsanto’s contracted crop dusters continue to fly in the face of logic. But Dunham and his family still manage to produce excellent food. In defiance of negligent crop dusters, here’s a simple and delicious recipe from the Heritage Farm newsletter.

Simmer the kale in a skillet in about 4 cups boiling water. Add salt and stir the greens until tender, about 10-15 minutes. Drain the leaves, toss with the olive oil and add the olives, pepper, and red pepper flakes. Serve hot with lemon wedges.