For the Love of Local Potatoes | Civil Eats

For the Love of Local Potatoes 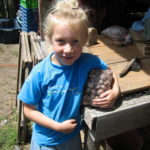 I’m an American with Midwestern roots raised on French fries, potato chips, and meat and potato dinners. I’ve been known to order mashed potatoes for dessert (I’m not joking), lived on baked potatoes and salsa in college, and generally think scalloped potatoes are manna from heaven (on par with a classic, homemade extra cheesy mac n’ cheese.) However, I didn’t’ truly appreciate the sheer joy of the potato until I had an opportunity to harvest rows and rows of them on a New Zealand family farm. I didn’t know that this ubiquitous part of my existence, this foodstuff I took for granted for so long, was such a treasure.

While a WWOOF volunteer in Nuhaka, on the East Cape of New Zealand’s north island, I happily trailed behind a tractor, knees and hands deep in dirt, to gather brown, yellow, and purple gems as they popped up from the earth. Harvesting felt like I was back in the schoolyard sandbox simply playing and discovering. Since the potato harvest was serious business for Neil and Linda, the owners of Woody Hollow Farm, the work went beyond the fun of searching for every potato that had grown in the field. We took crates and crates of them back to the work shed for sorting. Hours of work went into stamping the brown paper bags with the farm’s logo and more hours into bagging and weighing them for sale. And, I loved every minute connecting to this tuber and gained a new appreciation for its role in my life, as sustenance.

About 10 years ago, I stopped eating them all together. Low carb was all the rage and feeling a bit tubby I cut them out of my diet. I truly missed my mashers, but held firm to my restrictive boundaries. It was difficult, but I did it for a few years. A trip to Peru brought them back into my life as they are such a huge part of the native cuisine and are revered and appreciated for their diversity. Peruvians take great pride in cultivating a wide variety of them, in some places over 1200 kinds. The greatness of the potato, I discovered, is that it’s one of the most, if not most, efficient form of converting land and water into nutritious food. At 100 calories, no fat, and loaded with potassium and vitamin C, the potato is versatile and tasty to boot!

As much as I love the potato there is nothing like watching kids harvest and prepare them. The photo here is of my little friend Molly from New Zealand. She loved roaming the fields in her bare feet, dirt a constant under every nail, toes and fingers, and she was a great help in the kitchen when we prepared them for dinner. A few months ago, I got to watch a few dozen kids interact with potatoes when I volunteered to help my friend Chef Gabriel Cole conduct a potato party at Bret Harte Elementary School in San Francisco’s Bayview Hunters Point neighborhood. In January the students planted potatoes. While watching them grow they learned all about their origins, varieties, and how to prepare them. Then, in late May, they searched for them in the ground and learned all about the joy of an abundant harvest. In the end they’d grown over 100 pounds of russet, butterball, fingerling, yellow fin, red, and purple potatoes.

As a way to celebrate their harvest at the end of the school year, second through fifth graders participated in the potato party that transformed their garden classroom into an outdoor kitchen and dining room. We boiled the potatoes then dished them out to groups of students at tables. We offered them a variety of fixings like milk, butter, sour cream, chives, salt, and pepper and encouraged them to mash and smash. Then they appointed a taster who evaluated the flavor. Later the groups enjoyed eating their creations and comparing flavors.

One boy told us he didn’t like potatoes, but he liked fries. We explained that fries were made from potatoes much like the ones he planted and harvested. I think he had a hard time believing us, but when he tasted his own mashed creation, made from those same potatoes, he and everyone had to agree that “nothing beats potatoes you’ve grown.”

The potato love is abundant. Did you know that 2008 was dubbed “The International Year of the Potato” by the United Nations as one hope for alleviating word hunger? I even found an on-line potato museum co-founded by Meredith and Tom Hughes which boasts 1330 potato related items and covers the history and social influence of the potato along with a hilarious video of Myrtle Young, a potato chip collector, interviewed by Johnny Carson.

As one of the most popular crops on the planet, one that’s relatively easy to grow, and an edible that you can simply dig, heat, and eat, I can only hope that it’s diversity will reign and GMO potatoes won’t fly. (I read that in 2007 Greenpeace UK helped release a Russian study that found that genetically modified potatoes caused cancerous tumors in rats. The results were released after an eight-year court battle with the biotech industry.)

I’m happy to report there are a variety of sustainable potato farming projects in the works. The Northeast Organic Farming Association Sustainable Potato Project helps growers develop best practices for organic potato production and facilitates seed sharing initiatives. The Northwest Coalition for Alternatives to Pesticides, based in Eugene, Oregon runs a sustainable agriculture program that focuses primarily on potatoes because it’s the most chemically intensive crop in their area. I hope these programs and others will help alleviate any tolls that intensive mono-crop potato production has exacted in terms of water contamination and soil degradation and promote local production and increase diversity in our nation’s markets.

Now that potato salad season is heating up (I do yogurt instead of mayo), I enjoy my local potatoes that come in my CSA box and the ones I buy at my local farmers market. I’m fortunate that way. They taste so much better than the Russets in the five-pound bags Mom bought at Kroger.

I hope that local, organic, sustainably-grown potatoes get the recognition they deserve. And, that people don’t fall prey to impostors like Frito Lay, who in May announced their local potato chip campaign. Derided by bloggers local-washing campaigns like these need to be challenged by consumers and activists alike.

Most recently I got a chance to harvest some backyard potatoes for dinner. At a friend’s homestead up in Redwood Valley, in the midst of inland Mendocino County, my smile widened as I got to dig my hands into the earth and extract four gorgeous jewels for roasting. I felt complete.

That harvest inspired this piece and in preparation I re-read Michael Pollan’s Botany of Desire for a little dose of history and to just get in touch with the potato world as Monsanto sees it. Recalling the joy of those garden-variety potatoes it was hard to re-read Pollan’s account of his visit to Monsanto where “the cheerful staff horticulturist” invited him to “don latex gloves and help her transplant pinkie-sized plantlets from their petri dishes to small pots with customized soil.”

In light of the Frito Lay local campaign and increased use of GMOs, we have to stay vigilant about this most cherished tuber. And, as Tom Hughes, co-founder of The Potato Museum, said in a radio interview with Terry Gross, “we honor the potato as we honor ourselves.”