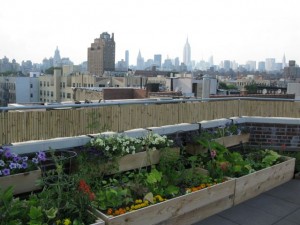 This post is part of a series called Roof Garden Rookies, which explores my attempt, as an amateur gardener, to grow a garden on the rooftop of my building in lower Manhattan. Check out my roof garden in a recent feature in the New York Times.

Cukes are twisting and turning their way up the stakes as I’m training them to, and green tomatoes and baby eggplants abound. With nearly three weeks of rain behind us (which made the broccoli and the beans happy, but not so much the squash) the garden is verdant and overflowing its boxes.

And six weeks after planting, the garden is sharing more and more of her bounty. 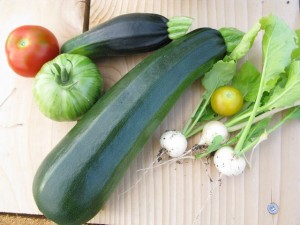 Yesterday, I harvested a Stupice and a Green Zebra tomato, as well as a little Sungold which I popped right into my mouth (same goes for the strawberries, which are so few I consider them a gardener’s snack), two zucchinis: one small and one large, and a couple turnips for dinner last night.

It is not uncommon for a neighbor to peek up onto the roof while I’m popping off dead flowers, either to say hello, take in the fresh air, have a picnic, or all three. I can tell the garden has added to our collective quality of life as a building; it simply dresses up the roof and makes us want to spend time up there, admiring the unobstructed views of the empire state building, amid the flowers blooming their heads off and the vegetable-potential high above the noisy bars and men riding bikes pimped out with boom boxes in the Lower East Side. The bamboo fencing adds to the serenity, that is until a bird of prey swoops over head while I’m eating dinner with a friend at our makeshift table (a new planter, yet to be filled, turned on its side) and manages to snatch up a white pigeon in midair, and then glide back, ostensibly to its lair, to dine as well. Nature, in New York City! 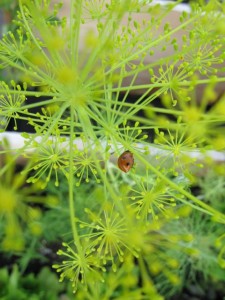 We’ve also had visits from beneficial insects, like the ladybug on the dill flowers to the left, and the bee parade that comes every morning. We have not been without aphids, and some leaf-eaters, too, but the damage has been marginal.

Along with the just-picked lettuces I’ve been nibbling (as have the neighbors, who proudly tell me in the hallway), the sorrel was bushy and ready for eating. I’d never prepared it before, so Yann and I looked online for a recipe for the easiest soup I’ve ever made (or watched being made), sorrel soup, which is great for the big stringy leaves that aren’t as fun to chew on raw. The recipe was so simple that I kept offering to go up to the bed of herbs and snip some thyme, chives or basil. “Are you sure?” I asked Yann. “Yes,” he insisted. “Just wait, the sorrel has a lot of flavor.”

I washed the bundle of sorrel, the significant leaves of four, first-year plants, and snapped off their stems. Then he placed them in a pot with a splash of olive oil, salt and pepper, and turned on the heat. The leaves sauteed while he diced potatoes and I watched. The pot was opened moments later for the potatoes, which were tossed in, along with six cups of water. When the potatoes were soft the heat was turned off, then the contents were pureed, and served over a dollup of creme fraiche. There is nothing like eating fresh from the garden, in the garden, so it was back up to the roof. He wasn’t wrong about the soup, it was delicious.