Better Bee-Haviour: From Bees, the USDA and Yes, the EPA | Civil Eats

Better Bee-Haviour: From Bees, the USDA and Yes, the EPA 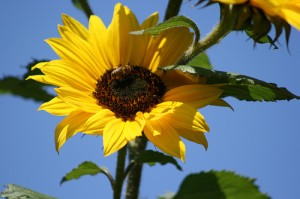 Bees have been dying off in record numbers over the past few years — some American beekeepers have lost anywhere from 30 to 90% of their bees.  The situation, termed Colony Collapse Disorder [CCD], has wreaked havoc on American agriculture and the $15 billion worth of crops pollinated by honeybees every year.

So I did what San Francisco State University biologist Gretchen LeBeun, creator of the Great Sunflower Project, has asked. I planted a Lemon Queen sunflower. And then I stood there watching for bees. I timed the first arrival, 7 minutes, 33 seconds. I stood in my front yard for over twenty minutes watching bees circle the new plant, doing loops around the Cone flowers and the Tickseed and circling back. Gretchen has asked us sunflower-planter participants to time how long it takes five bees to find this grand dame plant and then to send in this data via their website, to be included in their big research project on the honeybee disappearing act, the most mysterious and disturbing event in the world of agriculture today.

Recently, I saw Ted Jones, expert bee-wrangler, owner of Jones’ Apiaries in Farmington, Connecticut, and President of Connecticut Beekeepers, running around town with a truck bed full of hives and buzzing bees. With over 400 colonies of honeybees, Ted stays very busy renting hives to neighboring restaurants, farms and stores. Less than 10% of bees remain in the wild today and most farmers must rely on commercial beekeepers to keep their crops pollinated.

Ted says work has really picked up and that he hardly has a day off. “It used to be that you just dropped off the hives at the beginning of the season and then you come to pick them up at the end. But no more.” Now Ted needs to visit the hives every two to three weeks to make sure all is well.

Ted says that the bees this year, however, seem to be doing better, that the bees’ survival rate has improved and that they “are holding their own.” Not coming back full swing, mind you, but holding up just ok. The Apiary Inspectors of America (AIA) and USDA-ARS Beltsville Honey Bee Lab conducted a survey between September 2008 and early April 2009 and discovered that managed bee colonies have suffered a total loss of 28.6% out of the U.S’s estimated 2.3 million colonies. That is less than 31% and higher from the previous years, but this lesser loss still remains unsustainable.

Some scientists say it’s because of cell phones. Others say it’s related to the Bt-spliced GMO crops. Then there are the confirmed believers who attribute this global demise to a natural foe, the Varroa mite. And then there are the ubiquitous pesticides, herbicides and fungicides that we humans use to continually douse our fruits, grains and vegetables. Yet what is most mysterious of all is not why this is happening but rather why is it taking so long to find out? Is there no research being funded for this?

Other countries are finding explanations. Take Germany and the Bayer AG insecticide known as clothianidin. Many insecticides used against soybean aphids are highly toxic to bees and beekeepers do whatever they can to keep their bees away from this one in particular. In June 2008, Germany banned clothianidin and the CEO of Bayer AG and one other top ranking executive have been accused by the group Coalition Against Bayer Dangers of “knowingly polluting the environment.”

And yet, as devastating as this honeybee loss is, and as toxic as pesticides seem to be to these bees and as damning as the evidence is that links pesticides directly to the demise of honeybees, our own government has been reluctant to put their money where their honey is. That is, until now.

Last year, the Natural Resources Defense Council looked into the impact of pesticides on honeybee populations in the US and began to suspect the US government was keeping vital information from the public. Since the EPA refused to cooperate with the NRDC’s Freedom of Information Act request for agency records on the toxicity of pesticides to bees, the NRDC was left with no choice and filed a lawsuit against the EPA in August 2008.

Congress in its infinite wisdom has come to finally recognize CCD as a threat, and the Food, Conservation and Energy Act has provided the USDA with emergency funds of $20 million a year from 2008 to 2012 for honey bee research. BUT, as of May 8 of this year, Executive Director of Pollinator Partnership Laurie Davies Adams, submitted a letter signed also by the American Bee Federation and Häagen-Dazs to Chairman Herb Kohl and Ranking Member Sam House from the U.S. Senate Appropriations Subcommittee on Agriculture, Rural Development, Food and Drug Administration, and Related Agencies, calling the USDA’s efforts “stagnant” and asking them to please stop neglecting this critical pollinator research.

Then someone must have put a bee in someone’s bonnet at the USDA. U.S. Secretary of Agriculture Tom Vilsack signed a proclamation designating a 2009 National Pollinator Week which took place from June 22 – 28 and a Congressional Pollinator Briefing was held on Friday, June 26. According to Tom Van Arsdall, Director of Public Affairs for Pollinator Partnership, this Briefing “was instrumental in leading to major action.” For one, Representative Alcee L. Hastings (D-FL) saw to it that $5 million for CCD and pollinator research was added into the Agriculture Appropriations bill for Fiscal Year 10 (FY10) on the House floor. Häagen-Dazs, Burt’s Bees, and the almond industry’s foundation have also become big contributors to honeybee research. So maybe something really is happening or will be very soon.

But the UK may have beat us to it. Beyond Pesticides Daily News Blog reports back in April that a Pollinator Initiative has been created under the Living With Environmental Change (LWEC) partnership including the Biotechnology and Biological Sciences Research Council (BBSRC), the UK Department for Environment, Food and Rural Affairs (Defra), the Natural Environment Research Council (NERC), the Wellcome Trust and the Scottish Government. Beyond Pesticides quotes Sir Mark Walport, Director of the Wellcome Trust: “It is extremely important that we move swiftly to understand and try to reverse the decline in the populations of bees and other pollinating insects. The devastating effect that this decline may have on our environment would almost certainly have a serious impact on our health and well being. Without pollinating insects, many important crops and native plants would be severely harmed.”

As far as the EPA now goes, they have come back to the table, bee helmet in hand, and have offered a Pollinator Protection Strategic Plan which will help structure the EPA’s work in this pollinator arena in the future. This fall in October, they will be hosting the International meeting of the North American Pollinator Protection Campaign (NAPPC) at EPA’s Headquarters in Washington DC. They are also participating in NAPPC’s pesticide task force work to develop educational materials for pesticide applicators and facilitating NAPPC’s participation in the August 11-13, 2009, annual conference of the North American Pesticide Safety Educators (NAPSE) in Charleston, SC.

So bee-wranglers, while you are waiting for your honeybees to come back to the hive, perhaps some wrangling work can be had over yonder on Capital Hill. Contact your Senators and urge them to ensure that funding for honey bee and pollinator research be added to Ag Appropriations on the Senate floor. Get bee-sy today.