Chile's Salmon Farms: On the Verge of Collapse | Civil Eats

Chile’s Salmon Farms: On the Verge of Collapse 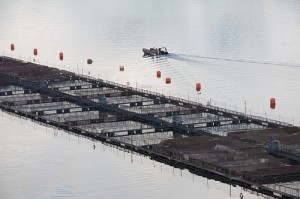 It seems like not a week goes by without industrial animal food production somehow making headlines–the H1N1 flu pandemic, astounding meat recalls, high levels of arsenic in chicken feed, or any of a dozen other concerns. One recent story that should have generated some rather large waves, however, has made only a minor splash. Chile’s salmon farming industry, second only to Norway’s, is on the verge of collapse.

Salmon are not indigenous to Chile, but grown in crowded cages installed in the bays and estuaries of the country’s otherwise beautiful southern fjord region. These “farmed” Atlantic salmon are fed a steady diet of wild fish–perfectly edible for humans, but more profitable when converted into “value-added” finfish. The approximately three pounds of wild fish needed to produce each pound of farmed salmon has caused some people to refer to finfish aquaculture operations as “reverse protein factories.” Equally alarming, salmon farms have become excessively dependent upon toxic pesticides to combat sea lice and antibiotic medicines to thwart viruses that can run rampant among the high concentrations of rapidly growing, penned fish–not unlike industrial-scale hog, poultry, and cattle CAFOs on land.

But the drugs are no longer working. According to industry source Intrafish, Chile’s 2009 salmon output could decline by as much as 87 percent from last year–a drop from 279,000 metric tons in 2008 to between 37,000 metric tons and 67,000 metric tons. The cause is the widespread outbreak of a virus known as infectious salmon anemia (ISA). When the virus first appeared in 2008, many offshore aquaculture companies moved their production farms further south in Chile, into waters still unaffected by ISA. Instead of lessening the problem, the industry actually spread the virus into the southern waters.

The Chilean government and regulatory agency are now implementing measures to address the crisis, but their efforts, for the time being, have been too little, too late. Chilean salmon stocks have been devastated, and this is expected to send ripple effects throughout the world’s food supply. A 20 percent shortfall in the global supply of farmed Atlantic salmon is predicted for this year and perhaps 2010 as well. The human toll in this saga is also significant, as the salmon industry has become a primary employer in the southern region of the country, and could lead to the unemployment of as many as 15,000 people.

Experts had been cautioning for years about the hazards of unsanitary conditions and overcrowding in industrial salmon cages. The first widespread die-offs due to ISA began to mount early in 2008, but the industry declined to take protective measures to guard against further spread of the infection. Critics have called for improved conditions by limiting the number of salmon in the cages and by spreading the farms farther apart from one another to avoid transfer of disease and to lessen the concentration of harmful chemicals, antibiotics, and other adverse affects of large-scale fish production.

Unfortunately, this has not been the only alarming news in 2009 about Chilean aquaculture. In February, the Pew Environment Group obtained documents [PDF] from the US Food and Drug Administration (FDA) revealing that the Chilean salmon industry has been using antibiotics prohibited on fish destined for the United States. (Pew wrote a letter [PDF] to the FDA) Apparently, the FDA notified the three companies guilty of using the unapproved drugs that they can no longer use them on fish raised for the U.S. market. But questions remain whether or not the FDA will enforce these restrictions, and if so, how they will go about ensuring that the banned substances are not used.

Concerns over antibiotic overdosing and its potential to create antibiotic resistant disease organisms that could harm humans may become less of an issue if the Chilean salmon industry suffers an even further decline. Many are calling for a dismantlement of the industry. Others caution that without real reforms it could implode of its own unsustainable production practices. At a minimum, we should take this as one more in a long series of wake-up calls that our concentrated animal food operations–whether on land or at sea–need to be urgently reconsidered, before they are all on the verge of collapse.