Why a Twenty-Something Should Care About School Lunch | Civil Eats

Why a Twenty-Something Should Care About School Lunch 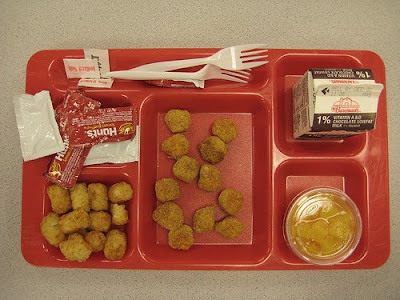 For many twenty-somethings like myself, issues like school lunch can be murky and distant. I’m not eating school lunch; nor do I have children who are eating school lunch (nor will I in the foreseeable future). When I think of school lunch, I mostly envision a Wonder Years-style cafeteria line, complete with mystery meat (or is it called Salisbury steak?) and a scoop of mashed potatoes. Not so bad, not so good, but unchanging and unchangeable. Right? Wrong.

School lunch isn’t unchanging and it isn’t unchangeable. It is changing: it is largely getting worse – looking more and more like fast food, with fewer and fewer nutrients for the kids, and more and more fat and calories. This information alone – that kids were eating pizza and chicken nuggets and baloney and cheese sandwiches – was surprising to me, making my Wonder Years visions look like home-cooked meals.

But what was truly shocking to me was just how possible it is to change school lunch for the better, just how changeable school lunch (and breakfast) is. For years now, since I realized just how bad school lunch really is, I have been wondering about legislation. There must be some way to change things, I thought, if only there was some way…But I figured that was just the way it is; that’s just what school lunch had to be, that it was a meal put in place by a government action a billion years ago that would take an act of divine intervention to ever get back on the Hill.

I think a lot of people out there are like me: we know that school lunch is abominable and shameful, but it seems like such a large, vague problem that it just isn’t even approachable. Starting from scratch to fix a problem as widespread and systemic as school lunch is intimidating, but that’s the thing – we don’t have to start from scratch. A discussion of school lunch is actually built in to legislation every five years, and the next reauthorization coming up this September. And that means that we actually have a chance to make a change this year – or if you really think about it, to make a change this year, and then five years from now, and then five years from then.

Want to be part of a country that feeds its children right? Sign the Time for Lunch petition, organize an Eat-In, and be aware that school lunch affects everyone in America, whether or not you or your child is eating it.

Claire Stanford is an MFA student at the University of Minnesota and a blogger at Food Junta. Read more >