The Revolution Will Not Be (Petrochemically) Fertilized | Civil Eats

The Revolution Will Not Be (Petrochemically) Fertilized 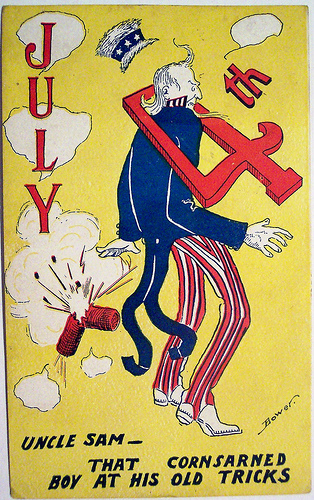 If you think diabetes and obesity are the two biggest health care crises Americans face these days, you’re missing the forest for the trees — literally. Because the roots of all this diet-induced disease lie in two less publicized but even more pernicious epidemics: nature deficit disorder and kitchen illiteracy.

The symptoms include a woeful lack of familiarity with that elusive culinary commodity known as “real food,” or “good food,” or “slow food,” and total estrangement from Mother Earth — who, by the way, keeps hanging around outside pining for a glimpse of you while you remain indoors, mesmerized by your monitor or TV screen and mindlessly munching on ersatz edibles.

Do you have no idea what you’re actually eating, where it came from, or how it was grown? You may suffer from one or both of these maladies. Are you fearful of naked food that’s not encased in microwave-friendly packaging? Petrified by perishable produce that demands any sort of prep?

Perhaps you’d buy the new wearable feedbag that lets Americans eat more and move less, or sample Taco Bell’s new “green” menu with no ingredients from nature, if these products existed outside the fertile imaginations of the Onion’s writers.

If we weren’t so divorced from nature, we’d give a rat’s ass — make that a double rat’s ass — about all those freaky deformed frogs that have been sprouting extra legs in recent decades, and the sexually deformed fish that started popping up in the Potomac a few years back.

As New York Times columnist Nicholas Kristof pointed out in his column last Sunday and again on Thursday’s Colbert Report, scientists increasingly suspect that “a class of chemicals called endocrine disruptors, very widely used in agriculture, industry and consumer products,” may be contributing to a scary hodgepodge of health problems in people as well as the disturbing rise in anatomical anomalies in frogs and fish.

Kristof cites a “landmark” 50-page statement from the Endocrine Society which presents “evidence that endocrine disruptors have effects on male and female reproduction, breast development and cancer, prostate cancer, neuroendocrinology, thyroid, metabolism and obesity, and cardiovascular endocrinology.” The statement adds:

The rise in the incidence in obesity matches the rise in the use and distribution of industrial chemicals that may be playing a role in generation of obesity.

I wrote back in 2006 that the EPA had identified endocrine disruption as one of its top six research priorities in 1996. But, a decade later, they had yet to begin testing any candidate chemicals for their endocrine-disrupting potential. Kristof notes that “for now, these chemicals continue to be widely used in agricultural pesticides and industrial compounds. Everybody is exposed.”

Sure, you could try to minimize your exposure to these apparent toxins by growing some of your own food without using pesticides and chemicals. But as our farming First Lady’s recently discovered, the ground you’re cultivating might be tainted anyway, because the chemicals and contaminants we’ve thoughtlessly dispersed into our air, soil and water in recent decades have a way of lingering.

Our obliviousness to the hazards of a chemically dependent food system have allowed these toxins to accrete in our environment — and our bodies — for far too long. But now, growing tomatoes has replaced throwing tomatoes as a form of protest: millions of Americans are looking to opt out of our toxic food chain by trying to grow some of
their own food this year, many for the first time.

If we truly hope to create an alternative food system, though, many more of us will have to roll up our sleeves and get digging. As urban ag pioneer and MacArthur genius Will Allen told Elizabeth Royte in Sunday’s New York Times Magazine, “We need 50 million more people growing food on porches, in pots, in side yards.”

Royte notes the inherent challenges for advocates of urban agriculture:

…there is something almost fanciful in exhorting a person to grow food when he lives in an apartment or doesn’t have a landlord’s permission to garden on the roof or in an empty lot.

But the edible landscaping trend is taking root wherever there’s soil, and even where there isn’t, with the help of exhibits like the New York Botanical Garden’s Edible Garden, which just opened last weekend and runs through September 13th.

The Edible Garden exhibitions include a Good Food Garden, a Seed Savers Heirloom Vegetable Garden, and a Beginner’s Vegetable Garden, along with a half dozen other edible landscape-related exhibits. Rosalind Creasy, whose essential but long-out-of-print book Edible Landscaping has a new edition coming out in 2010, thankfully, designed the Heirloom Vegetable Garden. Other homegrown heroes like Kitchen Gardeners International founder Roger Doiron and Slow Food USA‘s new president Josh Viertel will be among the featured speakers at events taking place over the course of the summer.

If I may borrow from Stephen Colbert, I’d like to give a tip of the hat to cookware company Anolon, a major sponsor of the NYBG Edible Garden exhibition whose own Creating a Delicious Future campaign seeks to remedy kitchen illiteracy by fostering “a return to eating delicious foods prepared simply at home using fresh, seasonal, local ingredients.”

The exhibition’s other major sponsor, Scott’s Miracle Gro, gets a wag of the finger: hey, guys, great way to greenwash the profits from all those pesticides the EPA has ordered you to take off the shelves.

Another wonderful edible gardening program to which I’ll gladly give a shout-out is the Giving Through Growing campaign sponsored by Robert Mondavi’s Woodbridge Winery in partnership with The American Community Gardening Association. Woodbridge is donating $40,000 this year to the ACGA to help provide “educational tools, leadership training, and community building strategies to participants in New York, Chicago, Atlanta, and Los Angeles.” As the Giving Through Growing website notes, the ACGA estimates that over 2,000 new community gardens will be established this year, on top of the 20,000 existing community gardens.

The Giving Through Growing program encourages you to send virtual “eSeeds” to your friends, and for every eSeed that’s planted, Woodbridge will donate a dollar to the ACGS. It’s a pretty painless way to show support for the folks who are greening our urban spaces.

Those of us who garden understand that food waste can either become “black gold,” i.e. soil-enriching compost, or be shipped off to the landfill where it rots and generates methane, a particularly potent greenhouse gas. Animal manures, too, can be a blessing to a farmer who raises his livestock on pasture, where the manure returns fertility to the soil as it has for centuries.

But when you crowd farm animals into what Jon Stewart aptly dubbed “an Abu Ghraib of animals” on Thursday’s Daily Show in his interview with Food, Inc.‘s Robert Kenner, the massive quantities of manure that result become an environmental disaster.

And when you saturate the soil with synthetic chemicals to grow resource-intensive commodity crops, you deaden and deplete it.

This, then, is the fundamental difference between sustainable agriculture and intensive industrial food production. The first method enriches the soil; the other ultimately ruins it. Destroy the soil, and you destroy your civilization.

Will Allen predicts that 10 million people will plant gardens for the first time this year. But, as he told Elizabeth Royte, “two million of them will eventually drop out,” when they get discouraged by pests and insufficient rain — or too much.

That’s OK; 8 million new gardeners still adds up to a revolution. So grab your trowel and start digging for democracy. Let’s overthrow the cornarchy this 4th of July!