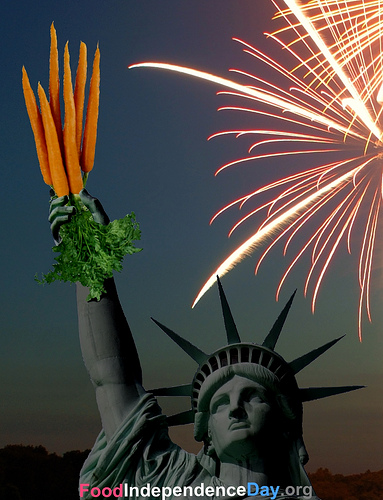 As a U.S. historian, I can provide examples of the many ways – both positive and negative – that patriotism has been expressed at different times in our nation’s history.  There are many ways that individuals and communities can express their patriotism today. Eating local foods can be one of them.

Local foods are patriotic, whether you’re buying them directly from producers in your area or growing your own. They’re good for our local farmers, our economies, our health, and the health of our planet.  Local foods give us pause to (re)consider our connection with the land and those who produce our food.  And they taste great because they’re fresh from the soil.  (Who says that what is good for you can’t taste good, too?)

This Fourth of July, please consider celebrating your independence by including locally sourced foods in your menu.  Roger Doiron of Kitchen Gardeners International – who earlier this year petitioned the Obama administration to plant a Victory Garden on the White House lawn – recently launched Food Independence Day to encourage local eating on the Fourth.  Part of this effort was to gain the commitment of individuals to include local foods in their menu.  Another goal?  To petition our nation’s 50 governors to consume local foods and publish their menus for the day.

Let Food Freedom Ring!  Several governors have published their menus, and you can help us get more to join the effort.  Sign the petition at www.FoodIndependenceDay.org and check out the Associated Press story currently running:

“This is an opportunity to celebrate our food culture,” he said.

On the day Americans celebrate the land of the free, a Maine man wants governors to feel free to live off the land.

A sustainable food advocate who campaigned for the Obamas to plant a garden at the White House has now received pledges from several governor’s offices to feature local foods on their Fourth of July menus, from Maine lobster to South Dakota pheasant jerky to milkshakes made with Montana huckleberries.

Roger Doiron said he was inspired to lobby governors to promote locally grown food after a patch of White House lawn was turned into an organic vegetable garden this spring.

“I said to myself, ‘Maybe we should try to look to other first families to eat by example and use their Fourth of July to make that happen,'” said Doiron, who wants to brand the holiday “Food Independence Day.”

Doiron is founder of Kitchen Gardeners International, a nonprofit that promotes food self-reliance through kitchen gardens and sustainable local food systems. Local foods are good for the palate, the health, local economies, the environment and your wallet, he said.

For the “Food Independence Day” effort, he teamed up with the Institute for Agriculture and Trade Policy Food and Society Fellows Program and the Mother Nature Network.

After setting up a Facebook page to promote the idea, they heard from more than 6,000 people who vowed to build their July Fourth menus around local and home-grown ingredients.

The governors’ offices in Idaho, Maine, Maryland, Montana, North Dakota, South Dakota, Texas and West Virginia pledged to do the same, Doiron said. The office of Minnesota Gov. Tim Pawlenty said the family would be out of state on July Fourth but would make efforts to eat locally through the year.

In Maine, the family of Gov. John Baldacci is planning a reunion this weekend that will include Maine lobsters, clams, mussels, potato salad and blueberry pie.

The menu in Maryland will have local crab cakes. South Dakota Gov. Mike Rounds will be serving up pheasant jerky (the state bird) and walleye (the state fish) along with hamburgers and hot dogs.

Montana first lady Nancy Schweitzer is planning a meal that includes Montana-raised beef, milkshakes made with local huckleberries, and huckleberry crisp. In West Virginia, the produce is coming from a local farmers market, and tomatoes and herbs were grown at the governor’s mansion.

Agriculture is North Dakota’s No. 1 industry, said Donald Caton, spokesman for Gov. John Hoeven. “It wasn’t difficult to put together a home-grown menu,” he said.

For his part, Doiron’s Fourth of July menu will include potatoes, dill, peas, salad makings and strawberries from his home garden in Scarborough. He also plans to dig clams from a local flat.

“This is an opportunity to celebrate our food culture,” he said.

P.S. from the author of this post, aka Victory Grower:  Today, a group of Food and Society Policy Fellows gathered on the phone to talk about Food Independence Day and the local foods we’d be eating with our families.  It was small talk about food from our gardens and food we’re purchasing from local farmers.  About preparing the recipes we’ve borrowed from one another.  Small talk, but sharing big ideas about public policy and food systems and culture and food independence.  Because small actions can result in big changes.

So, from the reaches of Maine (and Roger’s little “white house”) to the coast of Southern California (Rose), to the Pacific Northwest (Erin), to our nation’s heartland (Angie, Eric and Lisa) — or whatever place of the country you call home — let Food Freedom Ring!