The Flexible Beauty of Farming for the Future | Civil Eats

The Flexible Beauty of Farming for the Future 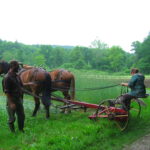 As has been reported here before, choosing to farm sustainably is not a call to forsake technology, lower your productivity, and mortify your flesh. Far from “returning to the 19th century” (the straw man that some critics love to first erect and then tear down), contemporary sustainable farming methods are rooted in a careful balancing of the old and the new. In other words, we will no more blindly accept tradition than we will heedlessly race after the newest fad, simply because a someone swears that the latest model will solve all your problems and wash the dishes too.

First, to the charge that sustainable ag is populated with luddites, techno-phobics, and hippies: good farmers love new ideas and technology and gratefully integrate them into a financially and environmentally sustainable system. They check weather reports obsessively the better to anticipate rain, frost, or drought—armed with this warning system, they are able to start growing earlier and end later, thereby producing more food. They use floating row covers (what looks like long, thin white sheets) to create a nonchemical barrier between crops and pests, to warm the earth for earlier planting, and to hold moisture in the soil. They employ portable electric fencing, without which intensive grass-based grazing systems could never have achieved the land restoring successes of farms like Joel Salatin’s Polyface. The type of farming practiced by today’s best farmers could never have happened in a previous century, because it takes advantage of recent inventions and a great deal of scientific knowledge that did not exist previously.

It is critically important to remember, however, that science and the scientific method are not a replacement for nature. Giving preference to one over the other is like hopping around on one leg when you have two perfectly good feet: you can get around for a while, but you’re liable to fall over eventually.

Last week, the young greenhorns of the Western Massachusetts CRAFT program visited Natural Roots Farm near Shelburne Falls, MA. Natural Roots is unusual in New England in that it is a strictly horse powered farm; the majority of the remaining draft horse farms in the U.S. are either in Pennsylvania, Ohio, or Indiana, where large Amish populations still exist. Farmer David and his partner Anna are not Amish, however (though David’s outstanding beard might suggest otherwise); they are simply a farming family that finds horses both a pleasurable and practical part of their farm system.

To me, inexperienced with draftwork, the harnesses seemed a indecipherable web of buckles and leather, but apprentices Rachel and Dan deftly moved the horses from implement to implement, first discing a field, then mowing a cover crop, then lightly cultivating a bed. Their vegetables were immaculate in the field, their cover crops tall and strong. Watching David drive the team across a freshly turned field, you could easily form a Romantic (or skeptical) impression of their work. But if all you took from the farm was the idea of draft power versus tractor power, you would fail to capture the full lesson of Natural Roots. David farms with horses, but he also manages his cover crops intensively for weed supression and takes soil samples monthly to see how fertility levels fluctuate throughout the season. He feeds his crops a foliar spray of organic amendments for elements he considers insufficiently present in the soil, in hopes that healthy plants will ward off pests and diseases. And as we gathered to begin the tour he showed us the washing station in their new barn, which had been carefully designed for maximum efficiency and minimal waste. This is not your grandfather’s hobby farm.

Afterward, as I spoke to Rachel, one of the apprentices at Natural Roots, she described how visitors had once come to the farm wanting a photo op of teamsters at work. “Make it look hard!” the photographer requested, as Rachel drove the team through the field. She laughed at the memory, “That’s the whole point,” she said, “the horses do the hard work so that we don’t!” Indeed, the apprentices at Natural Roots never hoe and rarely weed by hand—cultivation with horses and cover cropping keep weeds to a minimum.

Sustainable farmers want results—good food, certainly, but also a healthy biological system—and we farm in a way that fulfills us personally. Some of us (yours truly) like to hoe, but simultaneously appreciate the thoughtful use of a tractor. Some others of us prefer the clinking of horse harnesses to the belch and roar of machinery. The beauty of farming is its great flexibility. There are a great many paths from seed to salad mix, which respect the soil in equal, though different, measure. “Sustainable agriculture” encompasses environmental impact, but also finances, practicality, and a farmer’s well-being. The myth of industrial ag is that we have everything—more food than Americans even eat, successful family farms, safe food, and dirt cheap prices. The reality is not so simplistically cheery, but nor is it a dismal tale of hunger and societal collapse. As Natural Roots declares it its existance and success, we can grow into our future without denying our past.