Time to Get Tray Serious: Get Involved with a Child Nutrition Act Campaign Now | Civil Eats

Time to Get Tray Serious: Get Involved with a Child Nutrition Act Campaign Now 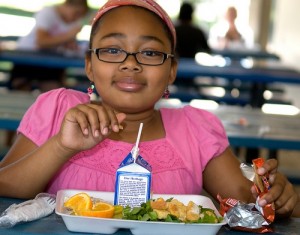 School’s out for the summer, but there’s a food fight going on in the cafeteria. In Washington, Congress is turning up the heat on the policies that determine what 30 million children will eat once the lunch bell rings.

Want hormones out of kid’s milk? Pesticides off the tomatoes? Local lettuce in the salad bar? Candy bars and snack cakes to be considered junk food? If you answered yes to any of those questions, then I urge you to step into the lunch room and learn what this food fight is all about.

What our kids see on their lunch trays is a snapshot of our national food system: fresh, baked, breaded, or fried. What we feed them affects how they learn, how they grow, and what kind of future citizens we’re nurturing. A formidable new combatant has just joined the kid-food fray: our country’s Mom-in-Chief. Last Tuesday, First Lady Michelle Obama stepped up her support of local, fresh foods, invoking community gardens and the Child Nutrition Act, while enjoying a harvest picnic with the Bancroft fifth-graders. (Read or watch (VIDEO) Michelle Obama’s speech.)

The current Child Nutrition Act expires September 30, 2009, meaning it’s up for reauthorization, and in that process we have a chance to really improve on how food for our smallest citizens is funded, sourced, defined, and prioritized. Remember in 1981, how under Reaganomics ketchup was classified as a vegetable and 2 million children were dropped from the National School Lunch Program? The Act has far-reaching impact, beyond school lunch, to the WIC, Child and Adult Care Food, and Summer Food Service programs, and others.

During the last reauthorization cycle five years ago, there was a scarcity of grassroots pressure and media around this policy. Thankfully, times have changed. There is a bountiful buffet of campaigns you can participate in: you can take five seconds and sign your name to a petition to demonstrate support, or you can dedicate your life to the cause like the indefatigable Ann Cooper (aka the Renegade Lunch Lady). Or you can grab a tray and get in line on one of the following efforts.

Today, the Healthy School Food Brigade, comprised mostly of moms, marched the halls of Congress to, you guessed it, voice their support of healthy food choices in schools, from hot lunches to less junk-filled vending machines. Basically they want to get junk food out of schools. Sounds simple, but au contraire. Think water is better than high-fructose-corn-syrup-laced fruit juice? Take this quiz to see what the standards for “healthy” currently are.

This group is specifically advocating for HR 1324 and S.934: “Child Nutrition Promotion and School Lunch Protection Act of 2009,” which amends the Child Nutrition Act to require the Secretary of Agriculture to establish science-based nutrition standards for foods served in schools other than foods served under the school lunch or breakfast programs. Today’s day of lobbying is the culmination of the new film Food Inc.’s social-action campaign, organized by Participant Media for the Child Nutrition Reauthorization. They joined forces with the Center for Science in the Public Interest in advocating for the proposed bill.

Food, Inc.’s campaign doesn’t stop at the end of the brigade today. Turn on your computer’s sound and take a noisy wander through the Hungry for Change cafeteria, which links to various organizations’ child-nutrition-focused campaigns. Among them:

Pesticide Action Network pushing for decreasing pesticide use on the food, particularly endosulfan

Center for Science in the Public Interest standing up for nutrition standards
National Farm to School Network restoring the connection between children, food, land, and place One Tray at a time

Representing the Farm to School programs, One Tray’s premise is that school food can not only improve the health of kids, but it can also offer new marketing opportunities for farmers and support the local economy. A joint project of the Community Food Security Coalition, National Farm to School Network, and School Food FOCUS, One Tray will officially launch when it’s time to take Congress “Back to School” in the fall.

The 2004 Child Nutrition Act included one provision on Farm to School (section 122): a seed grant program with $10 million in discretionary funding. It has failed to receive an appropriation. One Tray requests that Congress enact $50 million in mandatory funding for section 122. This would fund 100 to 500 projects per year, up to $100,000 each, to cover start-up costs for Farm to School programs.

Also in support of Farm to School, Slow Food USA launched a Time for Lunch campaign yesterday, to organize a national day of action on September 7 with grassroots Eat-Ins around the country, reminiscent of their monumentally successful event in San Francisco last year. Their message is simple: Real food in schools. Check out their top-notch organizing tools to plan or join an Eat-In.

These are all relatively new campaigns. The Child Nutrition Forum is the lunch monitor of this policy push. Formed in the late 1970s by former Senator George McGovern (D-S.D.), the CNF is co-led by the School Nutrition Association (which has a set of amazing, frequently updated resources) and the Food Research and Action Center, and includes more than several hundred diverse organizations, such as the American Dietetic Association, Congressional Hunger Center, National PTA, and the National Education Association. They have a petition to sign, too.

Petitions, eat-in’s, brigades…so many choices of ways to work on improving our future. What are you going to do?