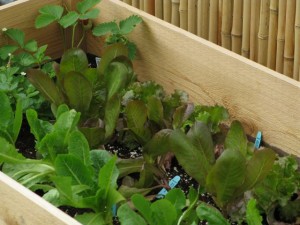 This post is part of a series called Roof Garden Rookies, which explores my attempt, as an amateur gardener, to grow a garden on the rooftop of my building in lower Manhattan. My roof garden was recently featured in the New York Times.


Last week I wrote about the process of building raised beds for my rooftop garden. The next step was clear: ready the soil and onto planting.

First thing was first, we started with 1000 pound of soil from the Lower East Side Ecology Center, a potting soil mix that includes vermicompost, coconut-based coir (a sustainable replacement for peat), perlite, green sand and black rock phosphate.  Once we got each of the 20-pound bags up the stairs, we began to fill the beds and quickly realized that we’d need another 500 pounds.

Eight of the beds were prepared with Garden Tone, an organic soil preparation for vegetables, as well as mushroom compost, a byproduct of mushroom growing that is full of minerals, as well as seabird guano for slow release fertilization. 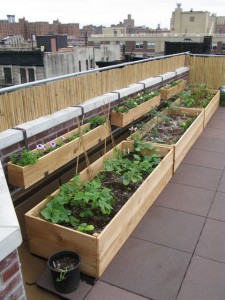 Then, the fun part: making a planting plan, gathering the seedlings, and getting dirty!

Many of the seedlings I planted were either from Silver Heights Farm at the Greenmarket, which carries a large variety of heirloom seedlings, or they were grown from seed by me or by Kerry Trueman of Retrovore.com. Many of my seeds came from the Hudson Valley Seed Library, a local seed library that works with heirloom plants that grow well in our area.

For each plant, I consulted my book (Tanya Denckla’s The Gardener’s A-Z Guide to Growing Organic, among others) to make sure I was planting companions and not foes, then I laid out my plants, leaving room for marigolds and other flowers in the beds, dug a hole for each, adding mycorrhizal fungi to help prevent transplant loss and a moisture crystal to keep moisture at the roots, and then tucked in my new green friends. 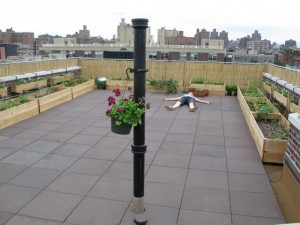 The acidic bed required Holly Tone, a preparation for evergreens — lovers of acidic soil. In addition, I supplemented garden sulpher around the base of the blueberries and euonymous vines I planted there.

With the addition of a composter for kitchen and garden scraps, and a few more flower plantings, the garden is off to a great start. After two weeks, I am happy to report a few tasty salads and strawberries, along with some developing zucchinis, tomatoes and beans! I can’t wait for the day when I harvest a whole dinner. Now, all we need up there is a table, and I’ll be outside all summer.

Photos: Yann Mabille, close look at the beds, one planted side, and me, exhausted after a day of planting