Step One, Hone the Ask: Why We Should Better Regulate CAFOs | Civil Eats

Step One, Hone the Ask: Why We Should Better Regulate CAFOs 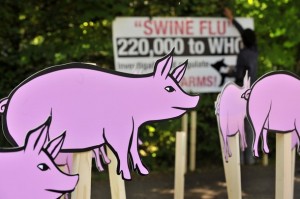 Our movement up to now has been disparate, siloed into unique yet interrelated causes around food, from hunger, to farmer and farmworker rights, to food access or to food safety issues. But in the last year, the pieces of the pie have been coming together to form a true movement. The question remains to be answered: How can we rally to show president Obama this movement, as he has asked us to do? And, what do we ask for when we get there?

Many great folks are out there developing “asks” around food. In my opinion, the biggest successes will come from getting at the roots of issues, asking for change on bigger policies that could have an effect on what is on our plate everyday. One great “ask” I have been thinking about, for example, is to change our policies around Confined Animal Feeding Operations (CAFOs).

For too long, we’ve been blaming the consumer for their desire to eat lots of meat, and therefore excuse the unsafe and inhumane practices at CAFOs, which contribute to environmental degradation, our healthcare crisis and impact the safety of our food.

Yet while many individuals are beginning to change their eating habits, realizing for varied reasons such as the state of their own health to the health of the planet that we cannot continue to eat as much meat as we do, there are still many left behind. What about the millions of people with access only to CAFO-raised meat, and for whom there is no knowledge to expect something different? They are receiving constant inputs from the marketers of Big Ag. In other words, creating a model with our own lives alone will never be enough to alter the meals of the masses. So what would change look like if we took a top down approach to CAFOs?

Right now, CAFOs continue to operate as they do because the government subsidizes the grain being used to feed their livestock. If these subsidies were capped, which I see as a necessary beginning to the shift to subsidizing the vegetables we need to be eating (now considered “specialty crops” by the USDA), we would begin to see changes in CAFOs.

In addition, the government is cleaning up the cesspools left behind after the massive amounts of animals have come and gone through a program called Environmental Quality Incentives Program (EQIP), which is spending up to $450,000 per facility to assist with cleaning up the manure that cannot be soaked up by the land in such excess. Why aren’t the polluters paying for their own pollution? Because for too long they have had their massive profits as a buffer for their interests in Washington. Instead, we need to hold these polluters accountable for their own mess, and fine them when they don’t comply. This, too, would change by force the way these operations function.

I can’t help but mention here that both of these agenda items were campaign promises made by President Obama. Perhaps in getting to Washington with a full plate of worries, these concerns have been shelved. Or maybe our voices haven’t gotten loud enough for him to hear.

Adding onto this platform, we need to re-assess the safety of the rampant non-therapeutic use of antibiotics in these facilities. Currently, 70% of the antibiotics used in the United States are being administered to farm animals, not just when they are sick but as a preventative measure and to increase growth, and studies have proven that these antibiotics are taken up by plants when manure from treated animals is used on crops. We also know that increasing exposure to antibiotics mean that they are less likely to work when we need them. There is currently a bill in Congress that advocates diminishing the use of antibiotics in livestock operations, called the Preservation of Antibiotics for Medical Treatment Act of 2009, introduced in the House by Rep. Louise Slaughter (D-NY). (Actions matter: write your House representatives and tell them how you feel about the bill)

The arguments against regulating CAFOs have always been that meat would be more expensive if we did. But if the price of meat were slightly higher, we’d eat less of it, simultaneously helping our bodies and the planet.

What we currently pay for food is the lowest of anytime in history, which is a feat to say the least. But there are hidden costs in our food system, leaving out factors like environmental harm, farm worker, slaughterhouse worker and animal treatment issues, and our health from the equation. Right now, instead of paying the real costs of cheap meat up front, we are socializing the costs on society through higher healthcare costs, poisoned air and waterways, and in food safety, as evidence points to these facilities as incubators of both MRSA and resistant new flus, but also as using larger facilities means a greater potential for harm from contamination.

The bottom line is that we are not entitled to eat meat.  It is not absolutely necessary to survive. I’m not writing this to promote a meat-free diet, but to show that our gluttony has a price. This doesn’t mean that only the rich should be able to afford meat, as it is in many other countries, but that we should somehow regain the respect we once had for the animal we are eating.

So first, we hold our president accountable for his campaign promises and then what? Once CAFOs have been regulated for the health, environmental and social ills that they are, we can begin to develop a better model, and transition farmers to appropriate-scale animal husbandry. What we are doing now is not a part of that old tradition, but in effect, a factory — an efficiency-based system bound with a lot of risk.

Luckily this is not just a fringe issue. People are waking up to the fact that our experiment in industrial agriculture is not working. Even a European group, Avazz.org, presented a petition to call on the United Nations World Health Organization in Geneva to investigate and regulate CAFOs. Their petition garnered 200,000 signatures in 6 days, which proves that people are concerned about this issue in the wake of the swine flu outbreak.

This is just one example of an ask worth pursuing. There are many issues that resonate in similar ways throughout the food system. What are the specific “asks” you have for this movement and this administration? Speak up in the comments, and be heard!