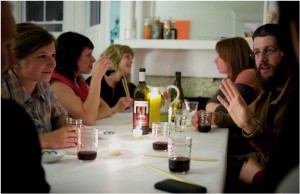 The underground restaurant scene has been gaining ground, so to speak, and while I’ve been hearing about many iterations of secret eateries all over the country (and the world), I had yet to check one out for myself until last week, when I bought two tickets to attend Wild Kitchen—an underground supper put on by San Francisco upstart ForageSF.

ForageSF is the brainchild of Iso Rabins, a committed young scavenger who has made a business of the bounty of the Bay Area by creating a “community-supported forage” subscription service, much like a CSA. Members of Rabins’ CSF get a box full of whatever he’s pulled from land and sea, all subject to the seasons (some of which are even more fleeting then farm crop seasons, such as a quick blink of wild mushrooms and miner’s lettuce). Rabins began doing occasional secret suppers as a way to assemble community around the delights of cooking and eating foraged food.

I bought my tickets online based upon a menu sent by email that promised fried cattail hearts, wild vegetarian sushi, foraged nori, local spring vegetables, and acorn ice cream. On the day of the dinner, I received another email revealing the address of the temporary establishment—fortunately just a few blocks from my house in the Mission. 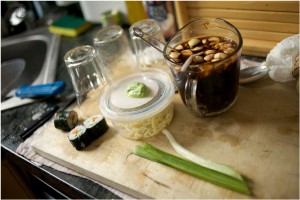 About twenty people showed up, some whom were already CSF subscribers and friends of Rabins, and others who were just passing through town from the east coast on their way to the weekend’s Maker Faire festivities. As Rabins said after the meal was complete, the crowd defines the evening, and this was a lively group. Conversation never ceased at the two long tables as we sampled radish greens from nearby McLaren Park, sipped 5-year miso soup, and drank a wide array of wine that arrived on the table via the BYOB policy.

Overall, the Wild Kitchen excelled as the sum of its parts. The food was very good, but the experience revolved as much on the novelty of eating unusual ingredients with a tangible backstory (I’d never tried cattails and certainly wouldn’t have thought to munch on the greens that grow in the shadows of McLaren park) and on the group of people that showed up to share it. I left thinking that the primary difference between making a great, interesting meal for friends and hosting a secret supper is that you recoup your costs and you get to be surprised by your own guest list. Certainly neither of these factors is to be underestimated—it was great fun to meet other local food enthusiasts and if felt good to support a venture founded on the principles of fair food and fulfilling work. As Iso Rabins builds a community around the fun of foraging, he’s also building himself a satisfying, independent career.