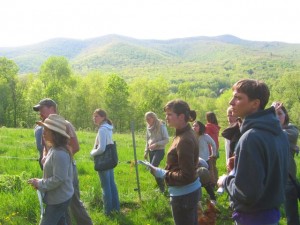 As an apprentice farmer hoping to strike off on my own sometime soon, I’m pretty much always asking myself, “where should I farm?”  Should I return to Georgia, where I have family and friends?  Stay in Massachusetts, with its farmer-friendly state government and affordable health insurance?  I hear Pennsylvania has a great climate for tree fruit…  Recently I asked my current farm boss, Don, if he thought that the market near Williamstown could support another CSA farm.  “That depends on whom you ask,” he noted after some thought.  “There are farmers who hear of a new farm in the area and worry that the extra competition will hurt their own business; others view a new farm as an asset, an additional resource when you’ve got problems or questions, as well as another reason for townsfolk to buy local.”

His answer stuck with me.  And since I received it, I’ve begun to notice more and more the ways that the farmers I know support and assist one another.  There’s Cricket Creek Farm, the raw milk dairy down the road, which provides us with milk all winter long in return for a share of veggies come spring.   Or Hand Hollow Farm, a fledgling CSA 20 minutes in the opposite direction, founded by one of Don’s former apprentices (we call her the Prodigy Farmer).  With Don’s help, she spent her spare time in the fall of her apprenticeship planning the following spring on her own farm, and she hasn’t looked back since.

I saw this spirit of mutual support more clearly than ever on Monday, when I and about 30 other apprentices visited Indian Line Farm for one of our bimonthly lectures and tours through the CRAFT (Collaborative Regional Alliance for Farmer Training) program.  Indian Line is a farm with a story, by virtue of its having been the first CSA farm in the country.  In between that founding in 1985 and the present day, the farm passed through several manifestations before settling into the capable hands of its present farmer, Elizabeth Keen.

Elizabeth and her husband Al had only apprenticed for one year when the opportunity to take on Indian Line presented itself for them in 1997.  With only a single shared apprenticeship between the two of them, their learning curve was steep, as they related to us.  So steep, in fact, that for Elizabeth’s second and third seasons at Indian Line, she took on off-farm work in the mornings—working for Martin Stosiek of Markristo Farm down the road. After two seasons of farming in double-time, Elizabeth made Indian Line her single focus, though the close ties between Indian Line and Markristo remain strong.

As the tour led us into the basement of the barn, Elizabeth spoke to us about her decision to opt out of the USDA organic certification process.  While USDA certification can certainly be a boon to supermarket consumers, many of the farmers I know consider the associated paperwork and fees a headache not worth the cache of the organic label.  Indian Line concurred with this perspective, but had sought a way to convey to customers at market the sustainability of their growing practices.  Their solution, to join the farmer-based non-profit “Certified Naturally Grown,” perfectly suited the thread of cooperation and farmer community that runs throughout their operation.

Certified Naturally Grown is grassroots alternative to the USDA, through which farmers audit one another for sustainable practices.  Certified Naturally Grown is neither costly (the program requests a donation of $50-150 annually, though the exact amount is left to an individual farmer’s discretion), nor overburdened with paperwork, thus allowing small farmers to devote their energies to farming, rather than to proving themselves to strangers via a mountain of forms.

Though a Certified Naturally Grown farm leaves less of a paper trail than a Certified Organic one, all CNG records are openly available online. Growers clearly state their growing practices and sign a statement that they have abided by all of the CNG regulations (which are essentially the same as certified organic).  So what’s the difference?  Besides price and time, the auditors are other farmers and are allowed offer advice as they walk the fields, talk to the grower, and evaluate the farm (USDA certifiers, on the other hand, are not allowed to offer any suggestions during an audit).  To avoid conflict of interest problems, you are not allowed to audit the farmer who audited you.  In addition, every year, CNG randomly selects farms for pesticide residue testing, at no cost to the farmer.

Could someone cheat this system?  CNG admits that “no one can ever really know what may or may not be happening on an isolated farm at 5AM on a Sunday morning,” but they believe that their combination of deterrents (random testing), community support (audits by other farmers), and a transparent, easily navigated process to certification create a system that is uniquely accessible to small farmers and informative for consumers.

From my perspective, probably the most striking example of farmer collaboration I see is the CRAFT program itself.  The exposure to varied farming models and practical agricultural information is priceless, but I imagine that the greatest benefits will only become visible over time.  Through CRAFT I’m interacting with 40 other apprentices, most of whom seem eager to grow their own farms as soon as they can scrounge together a few packs of seeds and a flat patch of earth.   We probably seem a motley crew–drinking from mason jars, traipsing uphill and down in thick rubber boots and manure-stained work pants—but we are a passionate crowd, full of questions, ideas, and dreams of good food.