Farm City: Gardening In The Ghetto 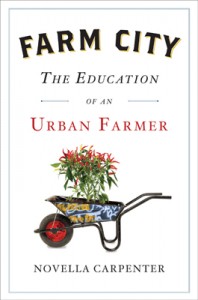 If you liked Barbara Kingsolver’s Animal, Vegetable, Miracle, my guess is that you will love Novella Carpenter’s new book, Farm City: The Education of An Urban Farmer. I found it to be both grittier and funnier than Kingsolver’s book and even easier to read.

The book chronicles Carpenter’s somewhat unintentional experience of creating a “squat garden” in the vacant lot next to her apartment building in Ghosttown, which is what she and the other residents call their rundown neighborhood located near downtown Oakland.

She also makes new friends including Willow, the pioneering urban farmer who started City Slicker Farms and a much-lauded local chef (Chris Lee of Eccolo) who teaches her to turn the two pigs she and Billy raise entirely on scraps from green bins throughout Chinatown and from food foraged from local dumpsters into delicious cured meats.

Along with the journey from gardener to urban farmer, she takes us soul-searching on topics like the divisions between races, classes and rural and urban dwellers, what it means to be a carnivore, etc. All the while, she pours her heart into growing something green, beautiful and nourishing that will feed not only her and Billy but their friends and neighbors, as well.