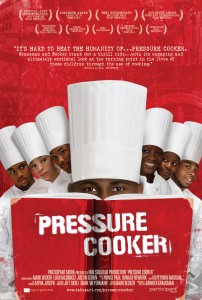 The first time I saw “Pressure Cooker” was at Slow Food Nation last Labor Day. It left me–and as far as I could tell every single other viewer in the theater–in tears. It follows three seniors at a Philadelphia public high school, charting their journey through a culinary arts curriculum under the wing of the hilariously blunt, tough-loving Mrs. Stephenson. The film has been making the film festival circuit for the past 9 months and will now be enjoying a theatrical release in several cities (scroll all the way down for schedule). Here I sat down for an interview with Co-Directors Mark Becker and Jennifer Grausman:

Civil Eats: What do kids get from culinary education that they can’t find elsewhere in their schools/lives?

Jennifer: Culinary education provides hands on training that can engage all of the senses – smell, taste, touch, sight, and sound. It combines creativity with practicality, and is a skill students can use in their lives now and in the future. Culinary Arts also encompasses many other disciplines: reading, math, science, but presents them in a practical rather than theoretical way that appeals to many students. In addition, the discipline of the kitchen adds structure to lives that may not have much structure, and teaches teamwork.

Mark: As for the students from Frankford, in Culinary Arts with Mrs. Stephenson, they are gaining access to a classroom unlike any other at their public school. They know that if they can perfect their crepes and tourne potatoes for Mrs. Stephenson, they can get scholarships and get out of Frankford. Mrs. Stephenson, through her irreverent and uncompromising manner, teaches the value of practice and discipline. There are seven sides on a correctly crafted tourne potato: Wilma helps the kids see that there is a serious upside to perfecting that shape. The patience, repetition, and focus necessary to tourne a potato are skills predictive of success inside and outside the kitchen. Wilma makes that abundantly clear.

Civil Eats: What do kids gain by developing a relationship with food?

Jennifer: Some students develop a passion for food and cooking, some gain respect and understanding for the products used in the kitchen, and many learn about nutrition as they broaden their palate and modify their eating habits.

Mark: I felt like I witnessed a developing respect for process. The students at Frankford were learning to put time and care into an endeavor. In preparing even something as seemingly straightforward as an omelet there were several variables that could lead to success or disaster. They developed a rigor in their mentality about how to achieve results.

Civil Eats: In the movie we see the kids eat home cooked meals and the food they cook in school–do they, like most teenagers, eat fast food? Or has their culinary training made them less susceptible to the big draw of fast food? Did you learn anything about kids and their relationship to fast food?

Jennifer and Mark: Although Mrs. Stephenson’s students cook gourmet meals at school and often cook at home, they also consume a lot of fast food because of its low price and easy availability. Also, several students work in fast food chains and often eat there for free. Money and time are big factors when students are at school, doing sports, taking care of siblings, and working part and full-time jobs. Mrs. Stephenson does try to broaden her students’ palates. In one of the scenes in the film, Erica (a 17-year-old) even chastises her family for not having a discerning palate: “You haven’t acquired the taste for anything but Fritos and Chitos.” And Erica believes in what she is saying, even though the food economy and culture around her can prove an overwhelming foe.

Civil Eats: The organization that runs the scholarship competition, C-CAP, has been around for over 15 years. How has C-CAP changed the landscape restaurant kitchens?

Jennifer: It is difficult to say that C-CAP has changed the landscape of the restaurant kitchens at this point. But many of its graduates have made it to the top of the kitchen hierarchy in some of the best restaurants in the country. Certainly, the lives of many students have been changed, and with the continued guidance of C-CAP they are furthering their education far beyond what they would have otherwise, and often finding great success in kitchens across the country

Civil Eats: As audience members we get drawn into the lives of the students very deeply–it is an emotional movie. As documentary filmmakers did you have to work to stay emotionally uninvolved? Or is emotional involvement with your subjects and their story necessary to create a movie like this?

Mark: On this film, one could not be detached. Dudley, Erica, and Fatoumata are these smart, ambitious, sensitive kids who are trying to do something that will help them potentially transcend the other options before them in Northeast Philly. They are funny and mature and charming, and their lives are so much more full and complex than the platitudes one hears about people in working class communities. So whenever we would film with them, or spend time with them, we always got that sense of peculiar privilege that one can sometimes feel when making a documentary. You feel like you are genuinely lucky to have access to this person, and you feel like you can learn from them.

Jennifer: Although we never wanted to interfere, or inject ourselves into their lives, we wanted to be there as people the kids and Wilma could talk to – about the good and the bad – even if it wasn’t material for the film. Some of the best conversations we had with them were off camera. In the end, we hope that that type of connection between filmmaker and film subject allows for naturalness to the Wilma, Fatoumata, Dudley and Erica you see on camera.