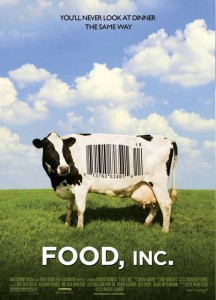 If you’ve ever been curious exactly how America produces the cheapest and “safest” food on the planet, but not quite believed all the hype that fuels the empty advertising slogans on your television, then Food, Inc. promises to be the film that explains why there’s a serious disconnect between food propaganda and reality.

In exactly 93 minutes, director Robert Kenner manages to slice down to the bone the many myths of the U.S. food system in a riveting documentary that exposes how a handful of corporations determine what our nation’s children eat and how America’s addiction to cheaper, faster, and larger portions has managed to shorten the average lifespan of the next generation for the first time since the Black Plague.

Helping Kenner make his point are leading food journalists Eric Schlosser and Michael Pollan, who take us on a tour of how food is really produced in America and not the sanitized, red barn, picket fence logos that have become ubiquitous in today’s grocery stores.

Unfortunately, the way food is grown, slaughtered and processed today owes more to mechanized practices honed during the industrial revolution and the audience quickly learns that the corporate food industry is desperate to keep the American public in the dark about their unsavory practices.

“There is this deliberate veil, this curtain that’s drawn between us and where our food is coming from. The industry doesn’t want you to know the truth about what you’re eating because if you knew, you might not want to eat it,” says Eric Schlosser, the bestselling author of Fast Food Nation who also co-produced the movie.

Instead of roaming freely out in green fields, as these animals have for thousands of years, today’s cattle are confined to giant feedlots while chickens, turkeys and hogs are crammed into factory farms, where disease and antibiotic resistant bacteria rage through the system of industrial animal confinements.

The High Cost of Cheap Food

The film opens with a voiceover from Michael Pollan, whose books, The Omnivore’s Dilemma and In Defense of Food have become foundational tomes for the growing food movement. Pollan calmly leads viewers down the aisles of an immaculate grocery store, rattling off facts about America’s food system that are greatly at odds with the pristine image that U.S. food companies are anxious for American consumers to swallow.

“The way we eat has changed more in the last 50 years than in the previous 10,000,” Pollan says, brilliantly painting the picture of today’s food marketing schemes, which Pollan calls a “pastoral fantasy.”

“There are no seasons in the American supermarket. Now there are tomatoes all year around. Grown halfway around the world. Picked when it was green and ripened with ethylene gas,” says Pollan.

For those unsure what exactly is wrong with that reality, the rest of the film succinctly explains the high cost that the cheapest food system in the world has had in wrecking havoc on human health, the nutritional quality of food, the livelihoods of family farmers, the safety of farm workers, rural communities and the environment.

While this has all been covered vividly before by both Pollan and Schlosser, Kenner manages to condense exactly what is wrong with the American food system in just the amount of time it takes the average American to gobble up a giant tub of artery choking buttered popcorn and slurp down a vat of the nation’s favorite soda, chock full of high fructose corn syrup, a cheap commodity sweetener which has been indicated as a leading cause of America’s obesity epidemic and the rise of type II diabetes.

The industrialization of the American food system takes the stage as the leading villain in Food Inc., which shines a bright light on the handful of corporations, Smithfield, Tyson, Cargill, ADM and Monsanto, that have centralized all segments of production, fulfilling the winner takes all mantra of 20th century capitalism.

The direct consequences of the intersection of the corporate, financial and political power of America’s food system are demonstrated through the heartbreaking stories of a woman whose 2-year-old son died from eating a contaminated burger, a low-income Hispanic family that have to pass up eating vegetables because they can only afford to eat fast food and a Maryland chicken farmer who is forced out of farming because she could no longer afford to be tied to a system that treats farmers like serfs while all the profits funnel up to multinational corporate agribusinesses. Unfortunately, these stories are not uncommon, happening every day across America.

For those looking for the brighter side of the food story, Food Inc. shows Gary Hirshberg, who started Stonyfield Farms with 7 cows in the early 80s, and now brings organics to the masses by partnering with Wal-Mart, the largest seller of groceries in America.
In stark contrast to Hirschberg’s warm embrace of mega corporations, is Joel Salatin of Polyface Farms, the grass-based Virginia farmer of Omnivore’s Dilemma fame.

While Hirschberg brings Wal-Mart executives on a tour of one of Stonyfield’s small dairy farms, Salatin shows visitors the synergy of his small-scale sustainable farm based on a pasture rotation system, which mimics nature’s patterns rather than rely on the petrochemicals of industrial agriculture.

Overall, there’s something in this movie for everyone, from the beginner and the policy wonk, to learn exactly how the food on their plate gets there and why the current system is badly in need of reform. Fortunately for viewers, Kenner did his homework. Food Inc. is another nail in the coffin for industrial ag, which is now continually on the run as their bad practices are finally catching up to them.

If you only see one film this year, Food, Inc. is that movie. In many ways, it can be seen as the antidote to America’s obesity epidemic. So drop that burger and fries and get to the theater!