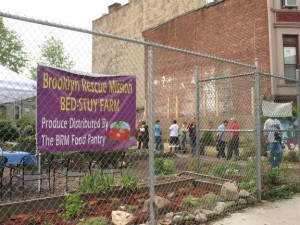 On May 9, New York City hosted an international dialogue about healthy food, sustainable agriculture, and community engagement — but it wasn’t held at a university or sponsored by a borough president. Three grassroots community groups in Brooklyn’s most underserved neighborhoods welcomed a group of 45 UN delegates from almost 20 countries for a day of conversation and exchange showcasing examples of New York City’s innovative urban agriculture.

The international representatives were in New York for two weeks of meetings of the UN Commission on Sustainable Development (CSD), the body responsible for reviewing progress on decisions of the 1992 Rio de Janeiro Earth Summit. The CSD meets annually in two-year cycles addressing various themes of sustainability, including water, energy, and sanitation. 2009 is the end of a two-year cycle focusing on food, agriculture, and land.

CSD participants spend most of their time in New York in meetings in the basement of the UN building, debating policy recommendations for international sustainable development. The tour was part of a series of events to introduce delegates to what sustainability looks like in New York outside the UN walls. At Bed-Stuy Farm, Hattie Carthan Community Garden, and East New York Farms!, the delegates learned, in the words of Rokhaya Deba Fall of Senegal, “New York has a different face than the tall buildings. It’s the face of many engaged people.”

The delegates were particularly struck that the face of Brooklyn agriculture is one of youth, as teen interns led the tour at Bed- Stuy Farm and East New York Farms! The interns, all local high school students, said they started the work because the programs paid well, but, according to one, “Now I do it for a lot of other reasons besides the money – or I wouldn’t be here today!” As the interns showed delegates around the farms, they talked about edible weeds and favorite recipes, showed off worms in the vermicompost system, and explained why their produce sells before that of the upstate farmers at the weekly farmers’ market (“People walk by the farm and see the food growing right here — they really know where it comes from.”). “We give food to people who can’t afford to buy it at the store,” said an intern at Bed-Stuy Farm. “It’s better than doing unconstructive stuff.”

George Matovu, an urban agriculture scholar and advocate with the Municipal Development Partnership in Zimbabwe, was impressed. “When I get home, I’m going to tell my colleagues that we’ve missed the youth link,” he said. Youth caucus delegates from Singapore to Toronto began developing plans on the spot for programs that would engage their peers and younger students through gardening. The significance of the paycheck that first attracted the Brooklyn interns was not lost — in low-income communities like Bed-Stuy and East New York, the additional income can be crucial to their families. “It’s so hard for youth entering the market these days to find work,” said Nkareng Mahlompho ‘Mota of the Lesotho Ministry of Forestry and Land Reclamation. “Urban agriculture keeps the city clean and healthy — and it can create lots of jobs.”

At Bed-Stuy Farm, Reverends Robert and DeVanie Jackson led a tour of the neighborhood, providing a stark illustration of a community that relies on, in their estimation, 40 emergency food providers. The Jacksons run Brooklyn Rescue Mission, a community food pantry, but they believe that the supermarket model of the food pantry reinforces the cycle of poverty. That, says DeVanie Jackon, “Is why we chose to grow food.” Since 2005, the Jackson have cultivated the farm, a 50′ x 100′ formerly vacant lot behind the pantry, in order to provide their pantry clients with fresh produce — as much as 7000 pounds in a year.

Despite the rapid growth of Bed-Stuy Farm, there is still tremendous need for fresh food in the community. The Jacksons hope to start another farm on the cracked pavement of a nearby abandoned tennis court, though the land deeds have been tied up in city bureaucracy for years. Some of the delegates half-jokingly discussed staging an international agricultural takeover. Citizen action, including agricultural takeovers, had an important effect in saving New York’s community gardens in the 1990s; Matovu pointed out that by 2009, government needs to recognize the benefits of urban agriculture and prioritize it more formally. “We’re saying to the politicians: people are here, they’re farming in the city – follow them!”

Dedicated community members welcomed the group throughout the day. In a very real way, strong community involvement has built each of the three gardens and farms – as well as many others around the city. East New York has NYC’s highest ratio of community gardens to residents (because it also had such a high number of burned out vacant lots), and the East New York Community Gardening Coalition contributes actively to the neighborhood’s thriving farmers’ market. Most recently, Hattie Carthan Community Garden secured a new piece of land from the city, right next to the original site. After a major community effort to clean it of tires, animal bones, syringes, and other trash, the space is being transformed into a raised-bed children’s garden and will soon host a new farmers’ market. Over an internationally-themed lunch at Hattie Carthan, featuring the garden’s early spring greens, one garden member told the delegates, “Even though people may be poor here, they’ll never be hungry, because they can always eat from my garden.”

Before lunch, Hattie Carthan Garden vice president Yonnette Fleming facilitated a community council, a traditional method of connecting and exploring common ground that she regularly employs to engage the community. Delegates shared some of their work on sustainability in their own communities, from tree planting in New York State to preserve biodiversity—to tree planting in Niger to combat extreme desertification. Many spoke about commonalities and inspiration they had found in Brooklyn. “This is more than a garden,” observed Lesotho’s ‘Mota. “It’s a space that reminds people what they should be doing in the world. I see possibilities I’ve never thought about before, for training and community education, even in my family’s backyard garden.” George Matovu had not expected to spend time on productive farms in the largest city in the US. “You have reminded us to remember the land, even in the city,” he said. “And you have reminded us that we should use the land for feeding people — the young, old, the poor, and the rich.”

For more perspective on this event, read here