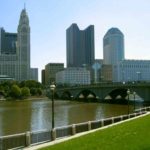 When Michael Jones, a chef by trade, came to Columbus, Ohio back in 1995 he was surprised there weren’t more local foods available for purchase by restaurants. Since Columbus is situated smack dab in the middle of a state whose number one industry is agriculture, he thought fresh local produce would abound. He quickly learned that commodity crops ruled just as heavily as fast food restaurants. Fifteen years later there’s been a huge shift. “People are more aware of different types of cuisine and there is more and more awareness of local food and its importance,” says Jones; and he should know. As the Executive Director of Local Matters, a non-profit whose mission is simply to build supply and demand for local food and make it equally accessible to underserved neighborhoods, he’s had a hand in supporting it.

With a guiding belief that local, healthy and sustainably grown food has the power to transform, sustain and build community, Local Matters runs three programs that aim to harness the power of healthy food as an important key to community change. Their Farm to Fork program, according to their website “encourages the farm community to grow more food crops by working to create market opportunities for small and medium size sustainably operated family farms and provides educational opportunities for the public regarding the social, economic and environmental advantages of purchasing locally grown foods.” The Greener Grocer, a for profit business and close working partner of Local Matters, is the hub this program.

The Greener Grocer, located in Columbus’s historic North Market, gets all their produce from local farmers and Local Matters purchases produce from them, thus supporting local business and local farmers. As a side note, the North Market, originally launched in 1876, is a year-round marketplace that was the second of four public markets in Columbus. And while a fire destroyed the original building, merchants and community members rallied the North Market Development Authority and the current incarnation is now home to 35 distinct local food businesses.

The newest and most exciting project within Local Matters’ Farm to Fork program is the “Veggie Van”. This mobile farmers market project, which started as a pilot in October 2008, distributes locally grown, fresh and nutritious fruits and vegetables in underserved communities. Beginning the last week of May, the Veggie Van will stop at 30 locations per week in Columbus neighborhoods. These stops include the Franklinton, Hilltop, The Near East and Linden communities and are just a few of the communities it will serve. The Veggie Van sets up in lobbies and parking lots in areas of high-density housing like apartment complexes and retirement homes and is set up with a wireless credit card machine that takes EBT cards (Electronic Benefit Cards) – the modern food stamp. “The beautiful part of the story is that it’s a twofer,” says Jones. “We support local farms by purchasing directly from local farmers and then make that same food available to underserved neighborhoods.” They set up a tent and tables, just like a regular farmers market and sell the produce at a price slightly lower than retail.

Local Matters’ other programs include an Urban Agriculture program that supports efforts by folks in vulnerable neighborhoods develop urban farms and learn healthy food cooking techniques; and a Local Foods to Schools program that works with students to show them how to grow their own food, participate in both the harvest and preparation of this fresh, local food in their classroom and learn about the role of fresh, local foods play as part of a healthy diet.

In terms of local food advocacy, Jones thinks Columbus is ahead of the curve. Those that have been leading the charge are starting to see their hard work pay off. “Local Matters is taking a leadership role in bringing these people together at the table to connect the dots in create a local food system,” says Jones.

In other news, the Ohio Department of Agriculture (ODA) recently hired Amalie Lipstreau as the Senior Program Manager of Sustainable Agriculture. As part of her new duties, Lipstreau directs the Ohio Food Policy Council which is designed to oversee the growth of a sustainable, statewide local food system. This is a huge step for a state that continues to be dominated by commodity crops. “For Ted Strickland [Ohio’s Governor] to appoint an Ohio Food Policy Council [in 2007] is a big deal here,” says Jones. “It has inspired local food policy councils to gain traction thanks to the statewide interest.”

Lipstreau is charged with expanding the Ohio local food system by looking at issues of markets and distribution and healthy food access as part of a strategy to keep local farmers on their land. She’s also leading the effort for a statewide local food assessment, something that hasn’t been done since 1982.