Kitchen Table Talks: Food Policy in the New Administration, A Who’s Who 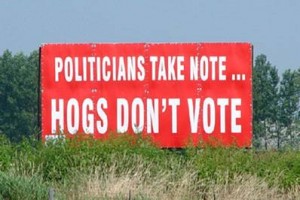 Last week, Civil Eats and 18 Reasons announced it would begin a regular series of live conversations at Linden Tree in San Francisco at the architecture office of Sagan-Piechota. Tuesday evening marked the inaugural session of Kitchen Table Talks (KTT), a new conversation series on the American food system. It was developed by a small group of organizers from Slow Food Nation and regular contributors to Civil Eats who wanted to capitalize on the conversation started at last summer’s event and on this site. One of the most notable things that we learned from the event and this site is that people are hungry for “food for thought” (pun intended). The Food for Thought sessions sold out quickly and the online videos garnered interest and attention following Slow Food Nation. The mission of KTT is that attendees leave each session inspired and ready to take action in their own communities. A crucial part of this equation is to bring in persons from various industries – health care, sustainable farming, food accessibility, food safety, government and general consumers – to create a unified movement in which we can make change to our food system.

Elanor Starmer, Research Analyst for the food program at Food and Water Watch kicked off the new series with an overview of the USDA, its new administration and its major programs. Elanor’s presentation was engaging despite the wonky topic; she did a great job of quickly disseminating profuse information. So, let’s get down to it:

What does the USDA do?

· Research, Education and Economics Division: Agriculture Research & Extension – research monies to public universities. This is particularly important because if there is not public money going to research then there are corporate monies for research which can and does lead to research in their favor. In the 2008 Farm Bill, organic agriculture was given four times the amount for research from previous bills. At only four percent of the total money allocated, it is a small amount, but a step in the right direction.

· Marketing and Regulatory Programs Division- Marketing US farm products; implements organic and other standards; GIPSA- which is charged with preventing unfair corporate practices and promoting fair and competitive trade practices.

So, who are we talking about here? Starmer gave us her “exciting” and “problematic” picks of the Obama Administration.

Mike Doyle, a professor at the University of Georgia, may be nominated as the next head of USDA’s Food Safety Inspection Service. He sits on the board of a number of livestock industry associations, has taken hundreds of thousands of dollars from industry for his research, and according to Starmer, supports “quick fix” food safety approaches like irradiation rather than preventative measures. He has also defended the practice of feeding healthy animals low doses of antibiotics to promote growth and counteract the effects of unhygienic factory farm conditions. He has not yet been nominated, so we have a chance to voice our opposition: e-mail the White House and USDA Secretary Vilsack to tell them you don’t want Mike Doyle in charge of our food safety!

Rajiv Shah, Under Secretary for Research, Education and Economic, is the former director of Agricultural Development in the Global Development Program at The Gates Foundation. The apprehension here centers on the Gates Foundation’s support of GMOs as a major tool in the “Second Green Revolution” the foundation supports in Africa – a continent where many countries maintain bans on the planting of GM seeds.

Rayne Pegg, Head of the Ag Marketing Service, will oversee the implementation of the organic program. Pegg’s previous work includes the California Department of Food and Agriculture, where she oversaw the creation of the Leafy Greens Marketing Agreement. This industry-led food safety program for farms has been harshly criticized by conservation, biodiversity and small farm groups, which argue that the LGMA encourages farmers to target wildlife with poison bait and traps and to mow down non-crop vegetation because it could harbor animals. (Wild boar are one suspect in the 2006 E. coli outbreak in California spinach.)

Now, for the good news…

Kathleen Merrigan, Deputy Secretary of Agriculture. Merrigan’s entire career has been dedicated to organic and sustainable food practices. Starmer best summed it up when she said, “If the USDA is a farm, then Kathleen is the farmer and Vilsack is the absentee landlord.” She is on the ground, working directly with the staff.

Kevin Concannon, Under Secretary of Food and Nutrition, will oversee WIC, Food Stamp and School Lunch Programs. He has long been an advocate for food accessibility to low income families and prevention of childhood obesity. J. Dudley Butler, GIPSA, is a former lawyer who defended family farmers against unfair practices by corporate farms. Lisa Bertelson, Special Assistant, Marketing and Regulatory Programs, was at the Pew Commission when it released its monumental study on industrial animal farm production.

After the presentation was finished, we opened up the floor to participants. Rather than the usual Q&A format, participants were encouraged not only to ask questions but to engage in conversation with Starmer and other participants. Highlights of the conversation:

· SB 416 has been introduced in the California State Senate and will be voted on before June 5. The bill will ban the practice of feeding low doses of antibiotics to healthy animals in factory farms. To get involved, click here.

· The Farm Bill programs are just starting to be implemented. We have the opportunity to influence the legislation and how food policy bills are realized through a process called rule making. After a bill becomes a law, the agency in charge still needs to figure out how to implement it which is done by requesting public input. How do we want research money spent? How should the process for approving GMOs work? Should CAFOs be able to receive money for “conservation” efforts? We can provide input and help influence their decisions. It does not have to be a lengthy or detailed comment. It can be as simple as “I think X, Y and Z are a bad idea. I do not approve.” For info about when and how to participate in the rule making process, sign up for action alerts from the National Sustainable Agriculture Coalition or Food & Water Watch.

· Child Nutrition Act – by changing school lunch programs, we have the ability to feed hungry children healthy, nutritious foods which educates the next generation about healthy food choices. If schools utilize local farms, the revenue stays within the community and emits less carbon than food shipped from across the country. Write a letter, make a phone call or arrange a meeting with your legislator and tell them why children nutrition is important to you personally. Find the office’s address and your legislator’s contact info at www.house.gov or www.senate.gov.

· Get involved with local groups (small farm, environmental, land trust) that interact with the county USDA offices and extension agents.

· Gather a group of people working on urban food systems/community food projects and set up a meeting with the local county USDA office to hear about the programs they have that can serve the community and support its work.

· Sign up on the Food & Water Watch listserv to find out about new opportunities to engage.

Go to www.foodandwaterwatch.org and put your e-mail in the box on the right that says “Stay Informed.”

Overall, the first KTT was a success! We had a large turnout and filled the entire loft of Linden Tree. It was an opportunity to meet like-minded people and learn not only from Starmer, but each other. KTT will continue monthly in San Francisco. Information will be posted to Civil Eats, but to learn more and stay up-to-date on future sessions, email ktt@civileats.com. Coming shortly, we hope to film KTT and post it to Civil Eats for those who are not able to attend and/or live in different cities.

This is truly a community forum and we welcome comments about past sessions and suggestions for future topics to this blog post or to our email address. Together, we can build a healthier, more sustainable food system.