Is Organic Farming a Form of Activism? A Call for Land Reform | Civil Eats

Is Organic Farming a Form of Activism? A Call for Land Reform 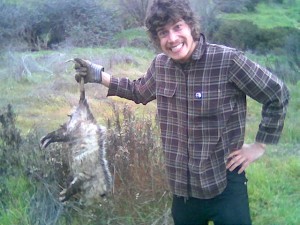 I was born in raised in a city, “the city” if you live in the Bay Area. Growing up in San Francisco taught me to value diversity, to be creative, to care about saving the world. Somehow, living in the city, I also got interested in farming. This interest came about out of a realization that our fossil fuel-based economy couldn’t continue indefinitely, and that our most basic need—food—was also in jeopardy due to the tenuous situation wrought by peak oil.

Upon this realization I decided to learn how to grow my own food, and to teach other people these skills. This wasn’t just a prelude to an escapist fantasy wherein I would move to the country, get “off the grid”, and form my own self-sufficient farm (replete with shotguns and stockpiled wheat) to weather the collapse of the industrial economy. No, instead I sensed that food could be a tool to get city people interested in taking control of a key aspect of their lives, and by doing this hopefully challenge the soul-crushing dynamics of modern urban existence (wage slavery, alienation, pollution and ill health being a few aspects). With these goals, some friends and I began to cultivate a piece of land which became known as Alemany Farm.

Alemany Farm consists of 4.5 acres of land in the middle of San Francisco; once an illegal dumping ground, it was converted to a productive farm program in the 1990s by the San Francisco League of Urban Gardeners (SLUG), but once again fell into disrepair in 2002 when SLUG disbanded. With all the proper infrastructure in place, and no attention being paid by anyone in the Recreation and Parks Department (the owners of the land), it was the perfect place to start growing.

Over the next four years, we weeded, mulched, pruned, planted, watered, and nurtured the farm back into working order. At the same time, we organized. The farm site sits adjacent to the Alemany Housing Development, which are pretty standard urban low-income projects (ugly, neglected, and isolated, sited next to a freeway). We knew that the farm project would only be worthwhile if it addressed the issues and needs of its closest neighbors, the residents of Alemany. But those needs, economic, social, and difficult to explain fully, were not going to be solved by some organic produce. In fact, conversations with residents indicated a lack of interest in sustainable agriculture, but a real interest in creating positive change in the community. And so the Alemany Farm project developed beyond its base of volunteer workdays and environmental education to encompass a larger, more challenging goal: stemming the tide of violence in the community by “growing green jobs” for neighborhood youth.

Without going into the details, it became obvious that this valuable work was not what I was cut out for. After years of organizing cross-culturally with leaders in Alemany, trying to teach gardening to youth who had no respect for me, themselves, or each other, seeing vandalism caused by the same kids I interacted with every time I went to the farm, dealing with overpaid and ineffectual city bureaucrats, and hosting thousands of new and returning volunteers (as a volunteer), I became frustrated. I got into this thing to grow food, and here I was instead stressed out by the realities of trying to address, as an outsider to the Alemany community, deeply entrenched social injustices. On top of it all, I felt like I was failing miserably.

Early this year, I knew that I had to step back from the project before my long-standing (and in my estimation beneficial) humorous cynicism morphed into full blown and debilitating jadedness. And what luck: in March I was offered a job (well, internship really) at a farm about 40 miles away from the city, working with a friend I had met during my work at Alemany Farm. My secular prayers had been answered! I made quick decisions and arrangements, and at the end of the month, found myself for the first time living a rural life, farming 5 days a week.

I’m now a month and a half into this new life, and (like any experience) I’m learning from the good and the bad.

The good: I get to wake up every day in a beautiful and serene place, where the only loud noise comes from the local school children who visit and explore the farm every Wednesday. I spend all day doing what I love, and visiting the greenhouse is an everyday occurrence (my favorite part of farming). I have Wi-fi in my cabin. I milk goats. I am officially the “intern”, but since my friend is in charge and he’s a champ, he lets me make decisions and treats me as an equal not a peon. Therefore I get to learn from both his accumulated experience on this land, and my own experimentation.

The bad: I am the only person on site who has to crap in a bucket. Something mysterious keeps leaving small bites on my legs. The farm is not a “true” sustainable farm in the economic sense. The land (220 acres of wild lands, 20 of pasture, and about .5 of cultivated vegetables) is owned by a wealthy environmentalist. She pays our salaries, lives here half time, and so far seems to be an agreeable, intelligent, and forward-thinking woman. However, she still runs the site as a hobby ranch more than a working farm, and so she no doubt spends far more money on upkeep of the lawns, housing, and infrastructure than she makes back with the money earned selling produce at the local farmers market. Why is this bad? Well, it fails to address a few issues of our broken food system that frustrate a would-be farmer like myself.

First is food access. Everyone knows that, with a few exceptions, organic foods are the realm of the rich. We only sell our produce at the Half Moon Bay farmers market. Half Moon Bay is a coastal community just west of the hill from the Silicon Valley. Like lots of other places in California, it boasts beautiful vistas, prime agricultural soils, and extremely high land prices. The clientele at our market are predominately white, well off, and are excited to be buying local (and in our case, non-certified organic) food. In my mind, selling this food to these people is not a political act. It is not addressing social injustice; it is not changing governmental legislation; it definitely isn’t creating an alternative culture of altruistic interdependence. Although I do enjoy working the farmers market, I feel that all I’m doing, at best, is providing a feel-good activity for members of the leisure class to indulge in on a Saturday morning.

Then there is the issue of land access. There is no doubt that the owner of our ranch is doing the best that she can, with what she has. But why are we still in a situation where the rich get to decide the best uses for land, while hard working, intelligent, compassionate, humble workers just do what we’re told? Most opportunities that I hear about for young farmers in this area involve farming for someone with land, and that someone is no doubt rich, and almost as likely, they KNOW NOTHING ABOUT FARMING. We get told to mow the lawn with a fossil-fueled machine, instead of having it grazed by sheep. We are told that floating row cover looks tacky, “can we not use it?” Well, maybe not, if you don’t mind grubs in your radishes.

My point is this: the sustainable food system will never truly exist under the currently existing conditions around land ownership. It’s not just enough to create local markets for organic food. If we truly need 20,000,000 new small-scale farmers to make this thing work, then those millions of farmers need secure access to land. No matter how many well-intentioned “progressive” rich people there are in the Bay Area who want to see a farm on their land, tenant farming, sharecropping, or—as they used to call it—“serfdom” isn’t going to cut it.

So while I spend my time feeling grateful about the peaceful and blessed experience I’m having on the farm, I’m also thinking of ways to turn these situations into something more akin to activism. What if we could convince the rich to lease (for free) pieces of land to new farmers, in exchange for a share of their CSA? What if we could form a union of farmers dedicated to the simple concept “the land should belong to those who work it”? What if we could channel the wealth of the wealthy into the health of the poor?

I think these things are possible, but only if we aspiring farmers don’t just settle for a self-image that sees organic farming itself as a radical act. Organic farming won’t save the planet from human-imposed destruction, and much less will it save human beings from the continued inequality, oppression, and exploitation entrenched by 5000 years of empire. For that ambitious goal, we must look higher and farther. Whether you are a rural new farmer, or an urban conscious consumer, I see solutions in the same kinds of actions:

1) Connecting with each other; (create community cohesion and foster social action, whether through barn dances or rock shows; urban food buying clubs or rural equipment sharing),

2) Connecting with the other; (the urban/rural, exploiter/exploited relationships can only be made well through communication and collaboration),

3) Changing culture; we’ve only got the power if we change the story so that we have the power. For too long the story has been about making do with what the elite offer us. We have to craft a better vision; a stronger vision that believes that more is possible and that demands no less.

So while I’m taking my outdoor shower, feeding the chickens some bolting chard, cleaning up sheep poo from a lawn, weed-whacking, transplanting basil, seeding out some strange new green or boring old lettuce, or looking out over our valley from the new tomato field, part of me will be satisfied with the day’s work, the company I keep, and the relative ease of my life. But part of me will be searching, knowing that something better is still to come.