The Garden: A Film, A Call to Action | Civil Eats

The Garden: A Film, A Call to Action 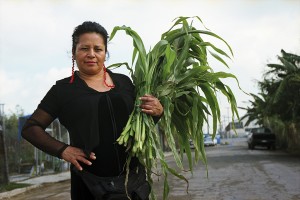 Last week, I sat riveted at the Horticultural Society of New York while watching a screening of the 2008 Oscar-nominated documentary, The Garden, a tour de force that pits a 14-acre community garden in South Central Los Angeles, run by mostly Latin American immigrants, against a wealthy developer with questionable city ties. A powerful treatise on power and racial discord, The Garden tells the story of farmers who organize to fight back against backroom deals to try and save their green urban oasis. [spoiler alert]

In the wake of the 1992 riots in South Central Los Angeles, the garden was created by the city as a way to heal the community. In turn, it became the largest garden of its kind in the country, sustaining more than 350 families and an antidote to the surrounding inner-city blight. The garden flourished for nearly a decade, until the city notified the farmers in 2003 they would be evicted within two months and the garden destroyed to make way for warehouses and a soccer field.

The film follows the farmers from the day they receive an eviction notice through the discovery of shady deals and courtroom drama to a last minute showdown replete with celebrity treesitters. With the looming threat of losing their land, Director Scott Hamilton Kennedy draws the viewer into the farmers’ struggle to continue planting and maintaining their community.

As the farmers decide to fight back and not merely vacate the property, I could almost smell the soil rising up against the smog of L.A. Through Kennedy’s lens, we follow the farmers’ leaders Rufina and Tezo as they hire a law firm who help them determine that the city had originally acquired the land for $5 million from owner Ralph Horowitz through eminent domain. They then discover that the Los Angeles City Council, in a secret, closed-session meeting and endorsed by Councilwoman Jan Perry, had sold the land back to Horowitz for $5 million—a price far below market value. Horowitz announces his intention to build warehouses on the land, as well as a soccer field. The situation is further complicated by Juanita Tate, the founder of the Concerned Citizens of South Central, who is adamantly opposed to the farmers’ cause and focused on her pet project, a soccer field.

In a bright moment, lawyers help the farmers’ score a preliminary victory: the County Superior Court issues a temporary restraining order and later a preliminary injunction halting development of the property until the lawsuit is settled. Sadly, later, the farmers lose the lawsuit and the court raised the injunction, freeing Horowitz to evict the farmers. 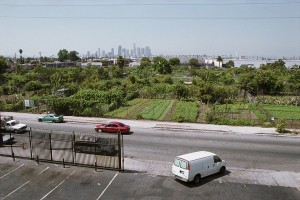 Initially, Horowitz seeks $16.3 million for the property, more than three times the 1986 eminent domain valuation. Then, in a deal brokered in cooperation by The Trust for Public Land, the farmers raise a little over $6 million. The film cuts to the only thing that seems to matter (but ultimately cannot save the garden) in L.A.: star power, as Willie Nelson, Danny Glover, Darryl Hannah, Joan Baez, Martin Sheen and others turn out to shine a light on the issue. In a stunning moment, the Annenberg Foundation announces they will donate the remainder of the money to buy the farm. And with crashing devastation, Horowitz declines to accept the offer; in his voice over, he says he would not have sold the land to them even if they offered him $100 million.

Ever-present is the glaring disparity between power and poverty, race and class. The immigrant farmers eking out a green space versus a wealthy developer and tainted city council member with a corrupt local organizer in her back pocket. Amongst claims of brown vs. black racism, anti-Semitism and “pimping poverty,” endless politicians parade their way through the garden, including Mayor Antonio Villaraigosa, who meekly states that he wishes there was more he could do to save the garden.

In the end, as bulldozers tear down the garden, tears rolled down my face. Perry manages to get re-elected, some of the farmers are relocated to a subpar parcel under power lines, while another group relocates to farmland in Bakersfield. The garden is still a dirt patch and Horowitz and the clothing company Forever 21 are now working on a proposal for a warehouse and distribution center on the now-bulldozed site. For what? I kept asking myself. Greenery turned to dust. Trees turned under for cheap clothes from China.

The Garden is a gripping and enraging film. While they may not longer have their garden, the South Central Farmers are still organized and protesting. Go see the film and learn how you can support local urban farms.

The Garden is playing select theaters: