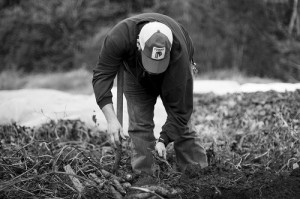 The number of landless and itinerant young farmers, working alone or with a few other people, is a pretty large demographic in my world. What is sometimes missing is not only land ownership but the sense of community that can come from an agrarian culture. None of these farmers wants to farm alone, removed from the company of like minded people.

The reality is that the work of farming requires a lot of time, and extra time is not always available to pursue the sort of friendships and bonding with other area young farmers that make the experience more fulfilling. Farming might not be as sexy as the New York Times sometimes makes it out to be, but can definitely be as fun as it looks. However, it can also get lonely and monotonous.

Fortunately there is enough social thread around here (in Chatham County North Carolina) to keep everyone together, whether it is through interactions in sustainable agriculture classes, conferences, or the newest idea around here – crop mobs.

A crop mob isn’t necessarily a new idea. Migratory groups of farm laborers, starting with “hobos“, have been a part of the American landscape for quite some time. And if you attended high school in the United States you might remember reading The Grapes of Wrath, the Steinbeck novel about traveling farm workers. Yeah, poor traveling farmers have been on the road a century and half. That doesn’t seem to be ending even as the number of farms available to work on diminishes.

So what makes it different this time around? For one thing, the idea of economic hardship as the driving factor has been removed. Most everyone involved is likely enduring some sort of financial or structural ruin in their lives. I don’t have running water, but I own land and make a mortgage payment; another lives in a tent, but lives rent free and worries very little about buying food.

We all have our problems, but none of them are sufficient enough to demand that we wander around the country doing meaningless labor for horrible wages. We demand and get better treatment and farm in the places we want to farm, for the experience it provides.

We farm because we want to, not because we need to. At some time or another we were infected with a desire to give and take from the dirt, whether it is the red clay of Chatham County or limestone infested soils of Western New York.

What brought this group together was the need to establish a community of people going through the same sorts of movements, many of which keep folks separated during most days. Classes, part time jobs, internships, harvesting and living far apart from each other keeps us in our own little bubbles. This new crop mob goes where it is needed, does the work that is needed, creates the community that is needed and gets us out of those bubbles.

To date the crop mob has visited seven farms with an eighth on the way. An average of thirty five people have joined each mob so far, and that number is growing. To learn more about the crop mob, please visit cropmob.org.

Trace Ramsey is a young farmer and writer in central North Carolina, a region where the new farmer movement is strong and growing stronger. His blog is Cricket Bread. Read more >