Spokane: A Chance for Sustainable Action 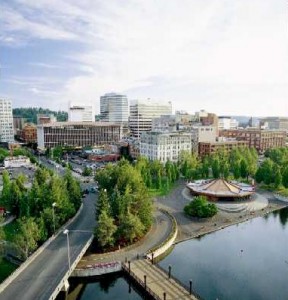 A boyfriend some 15+ years ago had the toughest time remembering how to pronounce Spokane. Knowing it really got under my skin, bless him, he figured out a little trick and never said it incorrectly again… “Spo-can-of-tomatoes.” To this day he has to say the whole thing to say it at all, but he gets the key part right and I’m good with that. The rest of the world better adopt whatever trickery it needs to get it right as well – Spocanoftomatoes (SCOT) is on the rise.

Continuing with the farm-talk analogies, this quite historically conservative town sits ready to bloom as the country’s prime example of the President’s message of change and just plain doing it right. The pieces have been in place for a while. A history of agriculture, a present of agriculture (still with some strong small acreage operations, both crop and meat production), the Spokane River running through the center of town, a reminder of the whole plate when migrating salmon competed with foam to be the primary spotting over the falls. Slowly (you’ll see more of that), surely, our foundation has recently been transforming. Welcome to 2009, and the city stands ready to show the country what can be done.

Much of the progress can be witnessed in the food world. When an excitable, flirting with crazy (when it comes to sustainable food systems), gal gets invited to the Reardan Lion’s Club meeting to talk about Main Market Co-op, a new consumer food co-op starting up this year in downtown SCOT, wheels are turning. (After my talk to this group of mainly large-scale, industrial-ag wheat producers, an old gent asked if I might stick around after my presentation to do a special favor. You bet. For the crowd, I got the honor of drawing the winner of a spankin’ new Remington shotgun!) The common thread, we’re all about local agriculture – Change is possible from that place and we’ve been encouraged by speakers in town, the likes of Michael Ableman, Woody Tasch, Paul Roberts, David Suzuki and more over the first 4 months of the year. Western S.A.R.E. held its regional conference in SCOT. Neighborhoods USA arrives to town for their national conference in a couple of weeks, agri-tours on the agenda. Save Our Wild Salmon maintains a strong office here.

While other stores offer organic foods, Main Market Co-op will definitely strengthen the commitment SCOT makes to our region’s producers, with it’s resurrection of rentable freezer lockers, member ownership, garden roof and farm walk visits. But it’s far from the only thing going on: Slow Food Spokane River is in it’s 3rd year of activity, with the annual sell-out ‘Urban Chicken Coop Tour’ only a couple weeks away. Riverfront Farm & Project H.O.P.E. enter their 2nd season of using urban gardens as the core of their ‘Jobs, Not Jails’ program to prevent at-risk youth from personal and societal destruction, and as a means of overcoming the food desert that occupies one of our most impoverished and historic neighborhoods. And an exciting, albeit little-known, possibility: one person’s interest in purchasing the largest available plot of land available in the urban core, and transforming it into one of the biggest organic urban farms in the country could almost overnight put a serious dent in food access issues, not to mention food miles. Also adjacent to the river, this plot of land was slated for very high-end condos and retail, the ground cover already stripped for pavement. Enter mortgage nightmare and resulting recession, and there it sits, willing us to do the right thing.

Do we in SCOT let it portend the next decade’s economy, with the power to throw dust around downtown this summer at levels rivaling those of the Great Gatsby? Or do we create an urban oasis of beautiful, delicious food, saving the topsoil for its intended purpose, and preventing immense issues with dirt run-off into the river? Urban agriculture represents a significant component of how this country will restore its capacity to feed itself. These projects and the honestly daily headlines about yet another community garden springing forth, provide convincing evidence that whether the city of SCOT will step up and add resources to the task, we the people, of the getting-to-be-united neighborhoods of SCOT will.

Spocanoftomatoes boasts allies in the chef community as well. In the last 5 years, we have attracted and cultivated a growing number of chefs who enjoy knowing their food, and get great satisfaction out of highlighting our local riches. Two months ago a second retreat of such food professionals shot more than just collective thinking out the other end. We now have a nascent but burgeoning collective voice from these chronic independents! Eatlocalspokane.org keeps the group connected and growing through a list-serv.

What about farmers’ markets you ask? Yup, SCOT has those too, and each year a couple new ones are born. Just last month, one of the local market managers convened the first-ever meeting of multiple market managers, forming connections, a fabric of local food producers. These too without any city support, physically or financially.

I point this out, because despite all the benefits of local economies and the courageous presentations farmers have made to our city, SCOT hasn’t lifted a finger to help. So, it’s odd and more than a little exciting that our new mayor instantly convened a city-wide Sustainability Task Force in her first few months of office. Next week, Monday May 11th, City Council determines our fate. Will we boldly attempt new, progressive territory or be forced to get out facemasks, not to prevent H1N1, but to face the symbolic dust on a windy day? SCOT stands poised to become the first city to adopt a sustainability plan that simultaneously addresses peak oil and climate change. Scary thing is, enough of the old guard mentality occupies those Council seats, and it’s honestly down to a single vote, with considerable GOP banter circulating about how it will choke the town with expense. If you’re moved to support SCOT and keep the momentum moving forward, please visit http://www.landscouncil.org/alerts/ to send SCOT’s City Council your feedback by today. They need the positive reinforcement that the rest of the world is watching, maybe even a little bit jealous of the potential.

What I wouldn’t give to have a crutch become more positive reality. That in its season, with all the new roofs, back yards, abandoned developments, and city parks drafted into food production, SCOT does indeed build a reputation for ripe, delicious, multi-colored tomatoes. BLTs for everyone!

Consistent work with both producers and the culinary community keep Jennifer at the forefront of Farm to Table cuisine, presently leading the charge to design and open Main Market Co-op, a consumer food co-op targeted to open in downtown Spokane, Washington during Fall of 2009. She promotes sustainable food sourcing and eating, and the critical need to preserve biodiversity as leader of the local Slow Food Spokane River convivium, co-Chair of Slow Food USA’s National Ark of Taste Committee, and as an appointed member of the USDA National Organic Standards Board. Jennifer believes whole-heartedly in community building at the table, and eating our way to health & sustainability. Read more >