Oprah Gives Out Free KFC in Most Hypocritical Move Yet 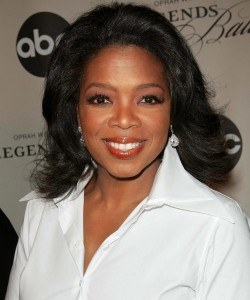 Perhaps it was all just too much, too kind and too ahead of the curve, all that work she had done recently to expose what truly goes on for chickens and other animals in the factory farm setting. Because now Oprah has decided to bolster one of America’s worst offenders when it comes to support for factory farming, KFC, by giving away two pieces of chicken to every human in America.

It may seem harmless: a mass market “they want it, so I’m giving it to them” kind of campaign. But because Oprah has marketed herself as one who cares about animals, even getting a “Person of the Year” award last year from PETA, this KFC campaign is a serious disappointment to say the least.

This is because KFC buys their meat from Tyson, which is the largest chicken processor in the United States and is known for supporting a conglomeration of chicken CAFOs (concentrated animal feeding operations). Inside these daylight-free hellholes, chickens are crammed so tightly together they can barely move. Worse, if we were to grow as fast as these broilers are bred to grow, we’d be 350 pounds by the time we were 2 years old. This is largely because these chickens are bred to have more breast meat (because that’s what the consumer wants), so many of them can’t even stand up. On top of that they produce so much shit that many farm workers get asthma just doing their job — and that is just the workers on the farm. Most of the Tyson workers spend their entire day on one part of the production line, slitting throats, de-feathering or removing intestines for hours on end. Yum. (video made by one worker, be warned, it is quite grotesque)

Just a recap: in order to have what we want to eat, we have created little monstrosities, which then get essentially tortured before routine killings performed by ill and disgruntled workers. And Oprah is encouraging this practice to continue!

If she would have taken the time to think about all this, I’ll give her the benefit of the doubt and assume she would see that encouraging these practices is not in line with the Eckhardt Tolle, Live Your Best Life, “We will all be judged on how we treat the least among us” persona she sells on her popular television show.  Individual choices do matter, especially the choices of those with enough money to buy every person in the United States two pieces of chicken.

If I were Oprah, I’d have struck a better deal with the fried chicken hawking establishment: She could have told KFC to change their buying practices, and only serve free-range chicken, and THEN give away free chicken. Had she done that, producers would start to see the value in letting their chickens outside to scratch the soil, eat grubs and peck grass.