Freshly Squeezed: The Truth About Orange Juice in Boxes 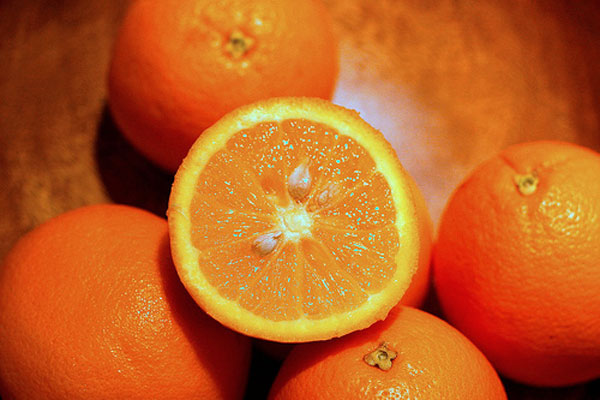 We’re so used to getting orange juice 365 days of the year that it may come as news that even Tropicana Pure Premium has a season. But it does. From March until June the Valencia is in its prime in Florida, and even Californians will admit that Florida grows a superior Valencia. The state produces a few other varieties for juicing. The Hamlin, which peaks in late fall, is the most heavily planted. But anyone who has anything to do with the manufacture of commercial orange juice knows that nothing compares to Florida Valencia juice.

The leading orange juice companies such as Tropicana (owned by PepsiCo), Minute Maid and Simply Orange (owned by Coca-Cola), and Florida’s Natural tell us many stories about orange juice: it’s natural, it’s pure and simple, it’s squeezed from oranges grown on pristine looking trees in Florida. But they leave out the details about how most commercial orange juice is produced and processed. Considering roughly two thirds of US households buy orange juice, Americans have a right to the whole story. As Tropicana launches its $35 million marketing campaign “Squeeze, it’s a natural,” it’s time for a reality check. Tropicana orange juice is not “relatively straightforward,” as reported in a New York Times article about PepsiCo’s recent decision to calculate the carbon footprint of its Tropicana brand of juice.

In the 1980s Tropicana coined the phrase “not from concentrate” to distinguish its pasteurized orange juice from the cheaper reconstituted “from concentrate” juice that began appearing alongside it in the refrigerator section of supermarkets. The idea was to convince consumers that pasteurized orange juice is a fresher, overall better product and therefore worth the higher price. It worked. Over the next five years sales of Tropicana’s pasteurized juice doubled and profits almost tripled.

In fact, “not from concentrate,” a.k.a pasteurized orange juice, is not more expensive than “from concentrate” because it is closer to fresh squeezed. Rather, it is because storing full strength pasteurized orange juice is more costly and elaborate than storing the space saving concentrate from which “from concentrate” is made. The technology of choice at the moment is aseptic storage, which involves stripping the juice of oxygen, a process known as “deaeration,” so it doesn’t oxidize in the million gallon tanks in which it can be kept for upwards of a year.

When the juice is stripped of oxygen it is also stripped of flavor providing chemicals. Juice companies therefore hire flavor and fragrance companies, the same ones that formulate perfumes for Dior and Calvin Klein, to engineer flavor packs to add back to the juice to make it taste fresh. Flavor packs aren’t listed as an ingredient on the label because technically they are derived from orange essence and oil. Yet those in the industry will tell you that the flavor packs, whether made for reconstituted or pasteurized orange juice, resemble nothing found in nature. The packs added to juice earmarked for the North American market tend to contain high amounts of ethyl butyrate, a chemical in the fragrance of fresh squeezed orange juice that, juice companies have discovered, Americans favor. Mexicans and Brazilians have a different palate. Flavor packs fabricated for juice geared to these markets therefore highlight different chemicals, the decanals say, or terpene compounds such as valencine.

The formulas vary to give a brand’s trademark taste. If you’re discerning you may have noticed Minute Maid has a candy like orange flavor. That’s largely due to the flavor pack Coca-Cola has chosen for it. Some companies have even been known to request a flavor pack that mimics the taste of a popular competitor, creating a “hall of mirrors” of flavor packs. Despite the multiple interpretations of a freshly squeezed orange on the market, most flavor packs have a shared source of inspiration: a Florida Valencia orange in spring.

If you like orange juice and want to buy American, now is the time. Only during this time of year can you pick up a carton that contains Florida Valencia juice that has not spent months in storage. The rest of the year, whether you buy Minute Maid’s “from concentrate,” or Tropicana’s “not from concentrate,” you’re drinking a mixture of Florida juice, some or all of which has been stored from previous seasons, and juice shipped from Brazil, which conveniently grows oranges when Florida doesn’t. Even the Florida based company Florida’s Natural, which is owned by a cooperative of Florida growers, imports Brazilian concentrate for its “from concentrate” juice line.

Or maybe you want to try something new for breakfast: a whole Florida Valencia orange. It’s higher in vitamin C than a glass of processed juice and the flavor is incomparable. The thick-skinned, easy to peel and separate Navel has been marketed as the eating orange of choice. But Navels have a lackluster flavor compared to the Valencia.

Sampling a Florida Valencia is a timely and good experiment, if only to refresh your senses and awaken them to the taste that your favorite brand of orange juice strives to imitate. Sure a whole Valencia orange may be messy, but all things considered, so is a glass of OJ produced by any of the major labels.

Alissa Hamilton is author of the forthcoming book "Squeezed: What You Don't Know About Orange Juice," which is being published by Yale University Press and will be released May 26, 2009. She has a J.D. and Ph.D in forestry and environmental studies. She is currently a Food and Society Policy Fellow with the Institute for Agriculture and Trade Policy (IATP). She lives in Toronto. Read more >