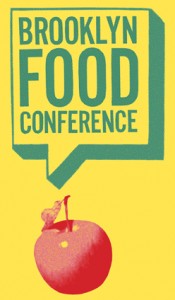 On Saturday, 3,000 people gathered at John Jay public high school for the Brooklyn Food Conference, a grassroots, volunteer-organized discussion around the state of our food system, featuring keynote talks by Dan Barber, Anna Lappé, Raj Patel, and LaDonna Redmond.  Along with these talks were 70 workshops throughout the classrooms of the school, on subjects as varied as growing your own food, starting a co-op and the value of breastfeeding.

According to the accompanying bright yellow guide, one of the goals of this event was to “bring Brooklynites together to demand — and participate in creating — a vital, healthy, and just food system available to everyone.” By my assessment, that is just what’s begun to happen.

Kicking off the day, Dan Barber gave a chef’s perspective on sustainability (speech text here) through a story about two fish he has served, each labeled ‘sustainable.’ He found out the first fish was receiving chicken in its feed, which the grower thought sustainable because they were taking advantage of the waste produced by the chicken industry. Grossed out, Barber began to use the second instead, which grew as a part of the recuperation of an entire ecosystem, “a farm that doesn’t feed its animals and measures its success by the health of its predators.” He warned, “We are on the verge of an ecological credit crisis, and it’s going to make this economic credit crisis a walk in the park.” In order to reverse this, he seemed to say, we have to rebuild farms and communities.

The next speaker was Raj Patel, (speech text here) who was not at all shy about talking about the possible relationship between Concentrated Animal Feeding Operations (CAFOs) and swine flu:

CAFO doesn’t really do justice to what was going on there. In this sort of feedlot and slaughterhouse, 950,000 swine a year are killed. 950,000. Of course, 950,000 pigs produce a ton of waste. And that waste was very poorly regulated, and the people in the city near this pork-processing facility fell ill. About 60% of them came down with mysterious flu-like symptoms about three weeks ago. The Mexican press covered it. Of course, the US press didn’t.

He laid some of the blame on NAFTA:

NAFTA made it safe for Smithfield to have its large factory in Mexico. NAFTA displaced farmers into the cities, but NAFTA also made it safe for large corporations to come in and start marketing their processed food products very heavily to Mexicans. And that’s why today the world’s second most obese country is Mexico. And the closer you get to the US border, the fatter Mexican teenagers, for example, are likely to be. That is a consequence of NAFTA.

Patel proposed that the answer to these problems is political — to take back our food system and in order to do this, to take back our politics. He accused many of us of thinking of our new president as “the pizza delivery dude of change” — as in, we are sitting at home waiting for a delivery of “hot, fresh, steaming change.” But as Patel is wont to do, he left us with something positive. He had just come from Mexico, where he was visiting a group of people who were wearing masks, but not because of swine flu. They were Zapitistas. He highlighted this group because of their good governance councils, where residents rotate on and off the council every week. They even have a sign when you enter their territory: “Welcome to Zapatista territory. Here the people lead and the government listens.”

Rounding out the morning, LaDonna Redmond came to the stage to remind us that our current unjust food system was built on the backs of individuals — through slavery and exploitation of Native Americans, African Americans and now Mexican immigrants. Furthermore, she said, we have never had a just food system. “Our unjust food system hides the faces of those it doesn’t want you to see,” she said, like the factory farm workers, the slaughterhouse workers, and those harvesting our food. She spoke about defining green jobs as those that pay a living wage, have a career ladder and protect the environment at the same time.  She also pushed us to redefine agriculture a green job before we demand that Van Jones allocate money for farming. (Later on she even read a poem about recovering from previous ways of thinking, which was beautiful and inspiring — is there anything this woman can’t do? I doubt it.)

Following these inspiring talks were the workshops. Unfortunately, I could only choose three workshops — and honestly, I would have enjoyed going to most of these sessions — but there was only so much time. I’d love to hear about your experiences and read your notes from workshops like Climate Change and the World’s Food Supply; Challenging Big Food: How Food Transnationals Harm Our Health and Environment and How to Fight Back; Food Sovereignty North and South: People’s Control Over Their Own Food; Food Rebellions; The Perils of a Globalized Food Supply: Trade Policy and How to Change It; Passing the Hoe: Our New Farmers Share Stories and Experiences — you get the idea, there were lots of great workshops to sit in on. The downside to so many great workshops besides choosing only three was almost missing lunch and totally missing the expos, which were filled with interesting people doing a variety of things to change the food system. Next time, my suggestion to BFC organizers is to have keynotes, lunch and expos fill conference day one, and to move the workshops to a separate day or convert them into weekly ‘salons’ to discuss all of these pressing topics.

The first workshop I attended focused on Organizing in the Obama Era, featuring Leslie Hatfield, editor of the Green Fork, as moderator, Winton Wedderburn, organizer of social media for the Brooklyn Food Conference, Naomi Starkman, editor here at Civil Eats and media maven for Consumers Union, and Natasha Chart, editor of Change.org’s Sustainable Food blog. The workshop operated like a crash course, discussing the tools helping to build this movement online, from action alerts to the power of blogs, Facebook and Twitter. We sort of take the internet for granted these days, but Hatfield reminded us that “the internet is the greatest hope for solving the problems we face”– in our food system, our environment and more, no other tool has the potential to organize so many so quickly into coalitions.

The second workshop I attended was titled Our Meat Industrial Complex: Hazardous to Our Health and Our Environment. Moderated by Kerry Trueman of Eating Liberally, the panel featured Brigid Sweeney, the farmer outreach coordinator for the Animal Welfare Approved program, Gowri Koneswaran, who works for the US Humane Society on animal agricultural impacts, farmer and physician Ken Jaffe of Slope Farms, and Alex Patton from Food & Water Watch.  This informative panel focused on all you need to know about CAFOs: the pollution they produce, the unavoidable mistreatment of animals in these unwieldy settings and how you can play a role in changing bad practices. The session was great whether you were new to these topics, as Koneswaran gave a spectacular overview with a powerpoint presentation and Sweeney filled in the blanks with an equally interesting powerpoint on labeling sustainble meat, or you were more advanced, Jaffe spoke in more detail about the science behind corn in a rumen stomach.

The third workshop I attended was Defending Against Genetically Engineered Food: Saving Seeds, featuring Ken Greene of the Hudson Valley Seed Library, writer and producer of the Bioneers conference, J.P. Harpignies, Howard Brandstein, co-founder of SOS Food and Executive Director of Sixth Street Community Center (Home to my CSA share!), and Bazelais Jean-Baptiste, and agronomist for Seeds for Haiti. In this talk, we got an overview from Harpignies of the issues behind the use of genetically modified seeds, notably a question of what belongs to everyone and what should be privatized — seeds having been a fundamental community right for centuries before big agriculture came along and patented them. The panel focused on what to do about the issue, with Brandstein focusing on a campaign to erradicate GMOs, and to have them labeled, Jean-Baptiste talking about Haiti’s plight trying to become once again food secure, and Greene discussing his seed library, where members take part in seed saving, which the Hudson Valley Seed Library also teaches. What was most inspiring for me was the fact that 40 people were crowded into the Old Stone House in Park Slope to talk about GMOs.  I think the tide is shifting, and as Monsanto and others have begun out of fear of losing their bottom line to try to expand their PR campaign to the comment sections of this and other blogs, we will continue to inform and dessiminate appropriate information about GMOs and the roles these companies play in tainting and controlling the world food supply.

Some of the other goals of this conference included: to “create an agenda and constituent base for legislating food democracy in Brooklyn; organize neighborhood meetings; influence public policy by educating officials and showing them the depth and diversity of public interest; create a useful, cross-referenced directory of attendees; help partner organizations grow their constituencies by offering attendees avenues for action.” Sadly, I missed all of the sessions with politicians, where consumers were given a chance to be heard — but this was an important way to make change on that same day.  The Brooklyn Food Conference ended Saturday night, but before parting coordinator Nancy Romer announced a series of “neighborhood meetings” in two weeks, which will be detailed on the Brooklyn Food Conference website by the end of this week, to form coalitions and to follow-up on the conference. I for one will be in attendance at one of these neighborhood meetings, and will keep you updated on how New York City is doing on its food system.

Closing the conference, a pregnant Anna Lappé asked, “where is the outrage,” referring to her pregnancy books outlining the diet an expectant mother should adhere to, including fish without mercury. She asked, “Why aren’t we asking, ‘Why is there mercury in our fish?'” I think by connecting us to each other, mobilizing our minds to focus on the variety of important topics we now face, bringing our representatives to hear about these issues, and by following up with neighborhood meetings, this community organized event should be a model for future events, and could be the beginning of a real change to our food system.