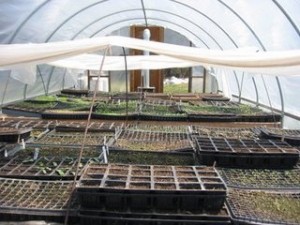 Something there is about springtime that would, I think, bring hopeful thoughts to the most inveterate pessimist. There’s a reason Williams Wordsworth was driven to poetry by the sight of a field of daffodils–this season is intoxicating. Lately spring has settled upon Western Massachusetts like a landslide of life: our asparagus is exploding out of the soil, the covercrop of rye grass in our fallow middle field is blue-green and lush, and our seedlings reach higher every day. Our calves frolic, kicking up their heels and all but dancing, as we let them out each day onto new, green pasture. Frankly, I feel about the same each morning as I walk up the hill from my cabin and breath in the smell of sunrise.

At such a time, it seems only appropriate that our CRAFT visit this week was to Farmgirl Farm, a young CSA farm whose grower, Laura Meister, spoke to us about the challenges and successes of her farm’s first 5 years. Beforehand, as we stood in a circle and introduced our company of bright-eyed young apprentices, Laura asked us to state whether we hoped to start our own farm someday, and if so how soon. Suffice it to say that we are an ambitious bunch.

Laura came to Farmgirl Farm without such grand designs. She signed on for the farm’s first season as a partner to an old friend, whose dream it was to run a small CSA farm. The white lie that she was “just helping for a year” proved “the blindfold that you need for such a crazy thing,” Laura laughingly explained. By the end of the year, her friend had pulled out, due to health problems and personal reasons. But Laura remained, took an ag business class that winter, and came into her second season with even more passion than the first.

Driving up, Farmgirl Farm seems petite and unencumbered by the detritus that old farms collect (tractor implements, wood scraps, scavenged miscellany which might come in handy some day). The main fields all fit within a neat, flat rectangular parcel which is bordered by an invitingly clear tributary of the Green River. Part of the reason for this tidy appearance is Laura’s lack of heavy machinery. Though she is now growing on 3 acres, she has not yet purchased a tractor and instead hires friends’ machines for the rare big job or preps beds herself with a walk behind rototiller. Because her land is all leased and she’s not exactly rolling in cash, Laura has intentionally kept her farm lean. She has invested in the fertility of her soil, certainly, but almost everything else–from the greenhouse to the coolers to the irrigation system–can be disassembled and moved, should a better opportunity present itself. She leases another, unirrigated piece of land across the street, and from these two small spaces she feeds a 75-member CSA and assorted restaurant customers.

To young farmers such as ourselves, Laura’s model is something that finally feels attainable. Many of us are working on deeply rooted established farms (Caretaker, for instance, was one of the first CSA farms in the country). While such farms are fantastic learning environments, they don’t give us much of a sense of how a 25-year-old could ever operate her own farm business. I can’t afford Caretaker’s beautiful old barn or its 38 fertile acres. But with a little bit of blind insanity and a lot of hard work, I imagine I could do something like Farmgirl Farm. For example, Laura is a brilliant scavenger. She found the frame of her greenhouse standing skeletal in someone’s field one winter, sleuthed around for the owner, and bought many of the components for a fraction of their cost. Laura uses bartered CSA shares not only to pay her lease (there were, I kid you not, audible gasps when she revealed this fact), but also to secure legal services, chiropractic care, manure for her compost, and housing for her apprentices.

She gave us practical advice on irrigation systems, marketing, and the value of transplanting vs direct seeding your first year (weeds won’t be as likely to choke transplants compared to direct-seeded crops). But what I remember most clearly and have been mulling over since was her humbling and inspiring benediction that “there will never be a moment when you think you know enough.” Get out, she said, ask questions, find mentors. Just commit to giving it your best shot, and the rest will likely follow.