You Say Tomato, I Say Monsanto 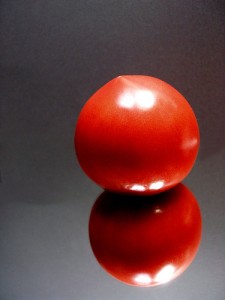 Scientific American recently published an article called How to Grow a Better Tomato: The Case against Heirloom Tomatoes. The author details how plant breeders are going about saving heirloom tomatoes from their own fatal flaws. The article was written in a combative tone with the author seemingly intent on provoking a knee-jerk reaction from lovers of good, real food not managed under laboratory conditions. It worked. The article garnered 80 comments, most from home gardeners taking issue with the errors peppering in the article like tomato seeds on a cutting board. The piece even provoked comments from some of the people in the article—namely employees of Monsanto. Seeing the name Monsanto connected with the concept of “improving” yet another food, makes it a little difficult to be neutral, but I’m going to try to look at this article with an open mind.

The author says, “heirlooms are actually feeble and inbred—the defective product of breeding experiments that began during the Enlightenment and exploded thanks to enthusiastic backyard gardeners from Victorian England to Depression-era West Virginia. Heirlooms are the tomato equivalent of the pug—that “purebred” dog with the convoluted nose that snorts and hacks when it tries to catch a breath.”

I’m wondering why, if they are so feeble, have heirloom tomatoes been passed down and saved for generations? And why do they continue to thrive?

The author says that heirlooms actually lack genetic diversity compared to hybrid varieties. He quotes a plant geneticist as saying that “there’s probably no more than 10 mutant genes that create the diversity of heirlooms you see.”

I’m not a geneticist but couldn’t these 10 genes be combined in endless combinations to produce the variety we see? And isn’t variety inherent when it’s obvious to anyone that there are hundreds of varieties of heirlooms and only a few hybrids that are grown commercially and by backyard gardeners?

The article also says that heirlooms are more susceptible to fungus that cause cracking and rot.

Haven’t gardeners been saving seeds that are well adapted to grow well in their particular soil and climate? Might the problem of hardiness be more a problem of growing certain heirlooms in places where they are ill suited?

He then quotes a scientist as saying that the celebrated superior flavor of heirloom tomatoes is really due to the fact that they have much lower yields than hybrids (sometimes only 2 fruits) and because they are ripened on the vine. The great flavor has nothing to do with their genetic make-up.

Even a gardener with a black thumb, like myself, will see that statement about heirlooms only setting two fruits as a wild exaggeration. And of course anything ripened on the vine is going to taste better than something picked green, gassed with ethylene, and transported by truck. That’s a given, so why do we need Monsanto to transform heirloom tomatoes into something that can stand up to such treatment?

Both the plant breeder and the Monsanto PR person saw fit to comment on the article for their own reasons due to misstatements in the article, such as the assertion that hybrid seeds are sterile. They are not. Since the article ran, the editor has changed some of the offending passages (marked by asterisks). The comment by Monsanto’s PR person stated that they didn’t like the title of the piece because they are doing what they are doing for the love of heirlooms….because they really want to save them.

And that’s when we get to the real point. The company that brought us PCBs, Agent Orange, rBGH, tried to patent the pig, and has unleashed a litany of misery worldwide doesn’t want to save heirloom tomatoes for us. They want to patent and own them. Though the company has met with resistance to nearly every product it has tried to sell worldwide, it just keeps plugging along like a nightmarish telemarketer on endless redial. Monsanto won’t stop until they own every seed on the planet. This article in Grist from last year estimates that with Monsanto’s 2008 acquisition of Dutch tomato breeding company, De Ruiter Monsanto may now control as much as 85% of the US tomato market. Even though the PR person states in the comment section that Monsanto is doing this for commercial gardens, not home gardeners, I think it might be prudent for all home gardeners to lock up your heirloom tomato seeds in a safe place and watch which way the wind blows.