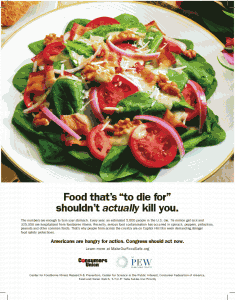 Yesterday, more than 20 victims of foodborne illness, including surviving family members of those killed by contaminated food, gathered at the U.S. Capitol to share their stories, meet with legislators and voice support for legislation to reform our nation’s food safety system. These victims and their families urged Congress and the Obama administration to pass food safety legislation that will improve consumer protection. The families came together as part of the Make Our Food Safe Campaign, launched by major consumer and food safety groups in an effort to put a human face on the food safety crisis in the U.S. and to set a list of priorities for food safety reform.

Collectively, the stories of these victims span over a decade—from E.coli in lettuce and spinach to the recent outbreak of salmonella in peanut butter—underscoring years of food safety failures.

Karen Hibben-Levi, 67, nearly died in 2006 from E. coli poisoning after eating a burrito that was made with tainted lettuce. She met with Sen. Tom Harkin and Rep. Bruce Braley and aides to Sen. Charles Grassley. All told her that Congress is on track to pass a major overhaul of FDA.

Lyndsey Jennings was a senior at the University of Michigan when she contracted E. coli, apparently from lettuce on a sandwich. She was in the hospital for two weeks with a potentially deadly condition called pancolitis, or inflammation of the entire colon.

In 2007, Bend, Oregon-based Chrissy Christoferson’s then 10-month-old son, Beck, contracted salmonella after eating a bag of Veggie Booty. Today, Beck is a healthy 3-year old, but it’s still not clear whether he will have any long term medical conditions from the salmonella infection.

Randy Napier’s 80-year-old mother, Nellie Napier’s death was traced to peanut butter from Peanut Corp. of America’s Georgia plant, which the company sent nationwide despite repeated positive salmonella tests. Napier has struggled to understand why it took so long to remove the product from the market. “These laws must be changed,” he said.

“The stories of these victims illustrate why Congress must act now to fix our ailing food safety system,” said Representative Henry A. Waxman (D-CA), Chairman of the House Committee on Energy and Commerce, who attended a press briefing with the victims yesterday morning. “We cannot afford to wait. Seeing a strong food safety bill enacted will be one of my highest priorities this Congress.”

Waxman is pledging to move ahead with overhauling the FDA and said that creating a new food-safety agency is off the table for now. “Right now we want to get FDA going on this and not spend any time at all on a new bureaucracy. FDA, which regulates 80 percent of the food supply, needs authority to inspect plant records and stiffer penalties with which to punish bad operations, he said, but didn’t set a timetable for moving legislation.

More than 5,000 Americans die annually from foodborne illness—from outbreaks linked to spinach, lettuce, and peanuts. According to the Centers for Disease Control and Prevention estimates, in that same year, there one in four Americans were victims of foodborne illness, causing 325,000 hospitalizations.

“These victims, their families and their stories must serve as the final wake-up call,” said Congresswoman Rosa DeLauro (D-CT), Chairwoman of the House Subcommittee on Agriculture, Rural Development, Food and Drug Administration and Related Agencies Appropriations, who also attended the press briefing. “We must act now to make it happen, transform the FDA, and begin a new movement that puts public health first.” DeLauro has introduced the Food Safety Modernization Act to separate food safety regulation from drug and device approvals.

President Obama made a commitment to improve food safety in the U.S. within his first 100 days in office. Several bills have been introduced in the 111th Congress that would give the FDA the tools and authority it needs to keep our food safe, including clear regulatory oversight and accountability, safety standards for imported foods, and mandatory recall authority.

Yesterday, Waxman told FDA Week that the House Energy and Commerce Committee plans to begin marking up a food safety bill as soon as lawmakers return from the Memorial Day recess, and the legislation will almost surely include user fees. A legislative hearing is likely within the next few weeks. Their bill includes hefty user fees, which prompted staunch opposition from the food industry. Waxman acknowledged that fees are controversial but said they’re necessary to ensure a workable bill and said the food legislation needs to be “self-funding.”

In recent months, deadly food poisoning outbreaks involving spinach, pistachios and two incidents with peanuts emphasized the need for systemic reform, said Jean Halloran, director of food policy initiatives for Consumers Union, the publisher of Consumer Reports. Over the last two decades, she said, the FDA has lost 90 percent of its inspection force. The consequence: Inspections at facilities have fallen to an average of once every 10 years.

The lack of government oversight has resulted in some retailers demanding food facilities do their own testing. But Halloran said voluntary efforts proved ineffective after a company tested its food positive for salmonella, failed to report it, then conducted additional tests until it found a negative.

“Food is completely fundamental. Everybody has to eat; we have no choice about it,” Halloran said. “We should not have a food supply that kills people.”