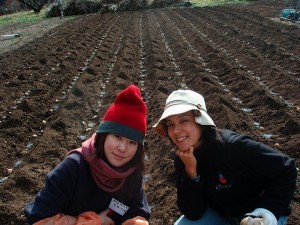 We Americans can be notoriously self-centered when it comes to, well, everything. In the environmental and food-justice movements, voices from Europe or Africa struggle to be included in the American discussion. But as a young country, we would do well to learn from other countries who never stopped plowing, harvesting, and eating in a sustainable way.
Recently I joined 200 other young people to participate in a pilot agriculture-experience program in Japan. Here’s the very simple idea: send 18 to 40-year-old city slickers to rural communities for a free five-day trip to learn farming, meet local people, and perhaps be tempted to adopt that way of life for themselves. Administrated by an environmental nonprofit group, a grant from the Japanese Ministry of Agriculture paid our food, bullet train fare, lodging — everything (and I’m not even a citizen!). Seems extravagant, but compared to the amount of money spent on recent bank bailouts it’s a very cheap form of stimulus — and benefits rural areas, young people, and the agricultural sector simultaneously. We were dispatched to rural communities across the country — I went to a tiny village called Kanna-machi (“God-Flowing Town”) a few hours north of Tokyo. Over half its 2600 residents are over 65 years old, reflecting the aging of the farming sector that is occurring all around the world.

Still, Japan remains a lot closer to its agricultural roots than the United States. Elementary school children take day trips to rice fields to practice planting and harvesting, and kitchen gardens are less of a novelty than common practice for many people. Walking through suburban or rural neighborhoods in the summer or fall it is easy to find a roadside shelf heavy with Welsh onions, potatoes, or squash and a battered box with a slit: “Leave 100 yen here.”

For those of us who are sincere about changing American food systems, we may learn a lot from books and the Internet. But nothing quite matches learning how to plow the earth from an experienced human teacher. 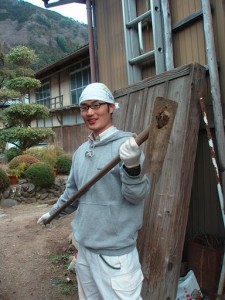 In my case, that teacher was Kurosawa-san. His family has been growing potatoes, cucumbers, sweet peas, and other row crops for generations in a sloping valley overlooking the Kanna river valley. When my teammates and I from the “Inaka de Hatarakitai!” program (loosely translated as “Countryside Working Squad!”) showed up at his farm, he regarded us skeptically. We were pale, skinny, and sneezing uncontrollably from the spring pollen, which rose in yellow clouds from the hills behind us (partially a result of 1960s monoculture timber policies, but that’s another story). Typical useless city folk, dressed in too-clean work clothes and fluorescent rubber boots.

Still, he patiently guided us through a spring clearing and planting day. Using hand plows and pure muscle, we started by turning over a dry crumbly field that had been left all winter. Stab its front tines into the ground, use feet and thigh power to get a deeper mouthful of soil, heave everything out, sling it to the side. Repeat. Repeat. After about two straight hours of crunching through this field, I started to realize a few things. One was that my flimsy city body needed a rest and probably accepted too quickly when Kurosawa-san’s wife invited us inside for a midmorning break of hot green tea, homemade manju (rice cakes filled with sweet bean paste), homemade pickles, and other treats. (Kurosawa-san refutes the image of the overworked, overstressed Japanese: “In the old days, we always had a 10 a.m. snack break, a one-hour lunch time, and mochi and tea at 3 p.m. The 3 o’clock break-time is very important, as is the homemade sake at night.”)

The second thing that working in Kanna helped me realize is that all sustainable farms have families somewhere in them.  Plants can be cranky and cantankerous; their care demands patience and knowledge built up over good years and bad years.  Farms cannot be run by economists, nor worked by undocumented immigrants in exploitative conditions, as is increasingly the norm in many parts of the U.S.

But the New York Times criticizes Japanese family farms as “tiny and woefully inefficient,” and American pressure is relentless for Japan to “reform” its agricultural and trade policies towards large-scale monoculture farming. But that would crush the thousands of small farms being tended with love by people like Kurosawa-san. When the sun started to set over the stunning Kanna valley, we surveyed our work with satisfaction: a neatly furrowed field of potatoes, waiting for the spring rains and a hot summer.

The next day, we took a tour of an organic agriculture farm owned and worked by the Okamotos, a couple in their 80s. With help from a local economic development advisor, they’d transitioned their entire farm to certified organic but were desperate for young people to help them work it. Perched on two flat portions of a hillside, their family gravestones overlook the fields, a traditional practice largely abandoned in modern Japan. How does someone treat the land differently when generations of ancestors are sitting right next door?

Many of my farming colleagues were recently laid off or otherwise adrift on a perennial sea of part-time work, casualties of a 1999 deregulation of Japan’s lifetime employment system. Some were obviously depressed over their lives not living up to an image of prosperity and consumerism projected 24 hours a day by Japanese mass media. Yet, in Kanna-machi I saw awkward computer boys and shy secretaries came out of their shells doing farm work and experiencing the pride of tangible achievement. 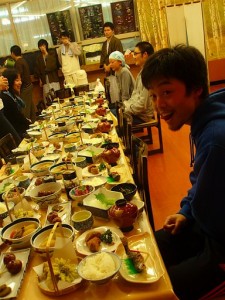 We cheered when the cooks at the city-run inn we were staying at served each evening’s meal and described its provenance: shiitake mushrooms from Nishimura’s farm, wild butterbur-blossom tempura, locally made konnyaku jelly, and on and on. By the conclusion of the program, we had all gained a few pounds and become fast nakama (tight friends). We set up a Kanna-machi group on Mixi (Japan’s largest social networking site) with the goal of returning next summer to help Okamoto-san’s harvest. In our debriefing session, everyone was surprised to discover that the most notable part of the program was meeting great people and learning from farmers like Okamoto. We had come to learn about the land and possibly jump-start a new career — and had ended up experienced a healing we hadn’t realized we needed. When we commit ourselves to taking care of forgotten corners of the land, we also commit to taking care of forgotten members of our society. What is more efficient than that?

The Japanese model is just one option. As Daniel Duane recently pointed out in Mother Jones magazine, the proliferation of farmers markets in the U.S. has not been matched by an equivalent expansion of small-scale, organic farms. This could lead to an undermining of the very concept of farmers markets. We need massive young farmer training programs, especially ones that focus on low-income Americans, the unemployed, people of color, the formerly incarcerated, and immigrants. Besides the glory of weeding, prospective young farmers need information on purchasing land, dealing with the USDA and other bureaucracies, and the basics necessary for any business: sales, distribution, taxes, and staffing. If the green movement is serious about expanding sustainable agriculture and healthy food for all, programs like the one I experienced in Kanna are a great place to start.