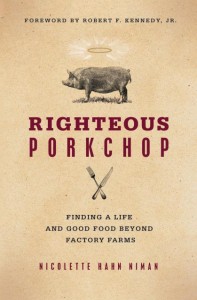 The title of Nicolette Hahn Niman’s compelling new book, Righteous Porkchop, is honest, and indicates one of the book’s strengths—its exploration of the moral issues behind our broken food system. As a vegetarian rancher she is uniquely poised to be even more righteous than most. Not only has she abstained from eating meat herself since young adulthood, she spends her days sustainably raising cattle for others to eat. Who can top that?

Of course, this wasn’t always the case. Not even 10 years ago she was a young single gal in the city, recruited by Bobby Kennedy, Jr. to head up the Waterkeeper Alliance’s new industrial hog campaign. With a background as a lawyer, she set out to take industrial hog farms (primarily in North Carolina) to task via the legal system for their gross environmental transgressions. She worked crushing hours, giving up her healthy lifestyle and her social life. But along the way, she won several important legal battles and put the issue of industrial hog farming on the map. In addition, in a story line you just can’t make up, she met and fell in love with Bill Niman, an older-than-her sustainable cattle rancher and entrepreneur, and her life was changed forever. P.S. he calls her “porkchop.”

In addition, her work with Waterkeeper led her inside the belly of the beast—or inside the poop lagoons of the beasts, anyway, and the book follows her journey. The reader makes discoveries alongside her, experiencing her righteous indignation and disbelief upon seeing those farms, as well as her heartbreak over the treatment of the animals she meets. As she explains, “the assembly lines of industrial systems function well for the mass production of inanimate objects. But they are complete failures at respecting the individuality, instincts, and needs of living creatures.”

Niman takes the reader sharply and clearly through the evolution of industrial farming in this country, from its origins in poultry, up through hogs, then cows, and then fish. She expertly explains shows the connections between these various industries; and how this country’s industrialist mindset, and its desire for more efficiency and lower cost has brought us a livestock system that externalizes all costs and all inefficiencies. With her as a guide, you can’t help but see the ludicrousness of a system that produces so much poop, in such a fashion that there is absolutely nowhere to put it. Or produces food that is cheap for the consumer but leaves the farmer in a lifetime of inescapable debt.

And no one, by the way, is off the hook. For those vegetarians in the mix (although I wonder how many vegetarians besides Niman herself will read a book with the word “porkchop” in the title), you find out that industrial dairy farming of milk and eggs is just as bad, especially in the realm of animal cruelty. All of which could leave an eater feeling very despondent and out of options—hence one of the final chapters called “Finding the Right Foods.” This is one of the weaker parts of the book, I think, in which Niman describes a kind of motivated foraging that I, and likely most of you, attempt each day, one that is really helped by living in the fertile areas of this country’s west coast (Bolinas, CA). For the average reader, this kind of scavenger hunt might be less feasible; but until we have an overhaul of the food system, I suppose it’ll have to do. This chapter is evidence of where the book tries to be all things to all people, and where it falters, if only slightly. It’s memoir meets muckraking; shopping manual meets farming history.

The book stirred up a lot for me, and really got me thinking about our task at hand. At the heart of the sustainable food movement are many issues—ecology, animal welfare, community, sustainability, and, yes, morality. And this is where we sometimes hit roadblocks. I know that on a personal level I struggle to communicate the work I do at my job or the way I shop for food without an implicit value system looming over the conversation. Nobody likes to feel judged, and sometimes people stop listening when they do. With Niman’s book in my back pocket, I’ve got one more tool in my box. But the question that lingers for me at the end of this righteous book is: how do we tell this story of what’s wrong with our food system, and how do we suggest an alternate way without sounding self-righteous? Without pushing away the people we need to listen?